Imagine asking Julius Caesar to review the arcade game Galaga. He lacks the knowledge of space that even children have today, and certainly can’t recognize a spaceship; he keeps going on about how using arrows against bugs is a waste of a perfectly good arrow. Even the high score concept is foreign to a man who doesn’t know about the modern arabic numerals, and anyway, he gets way too interested when you happen to mention a CRT monitor’s discharge could kill a man. Would you really learn anything useful about Galaga from his review? And what is the point of this thought? Nothing, totally irrelevant. Let’s talk about the Casio Loopy!

Casio is of course a big name in electronics, but they’ve not shown up on this blog at all before. They made some MSX computers, and the Casio PV-1000 and PV-2000 consoles in the early 80’s, but the Loopy has pretty much nothing to do with those. 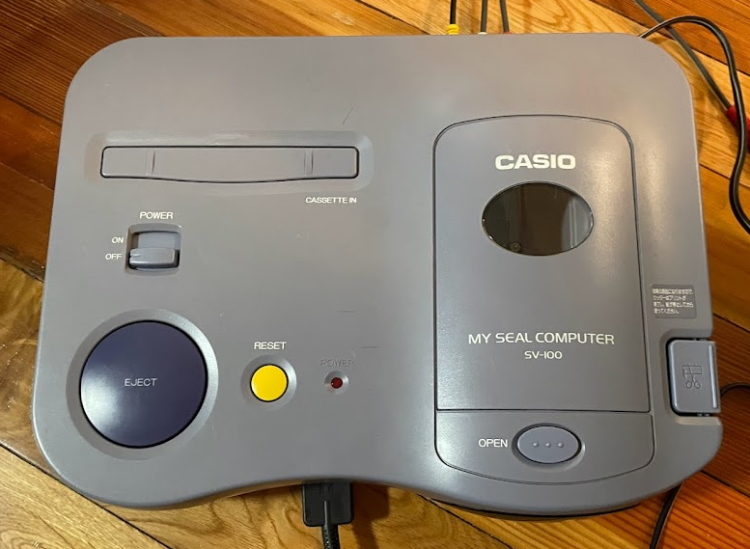 The Casio Loopy is a 32-bit machine with a SuperH CPU, released in 1995. This family of CPUs is probably more famous for its use by Sega, but the SH7201 used in the Loopy appears to be still in production by Renesas. I’m not sure how much the SH7201 has changed over that time; it seems to be an SH-1 system, as opposed to the SH-2 used in the 32X and Saturn, and the SH-4 used in the Dreamcast. 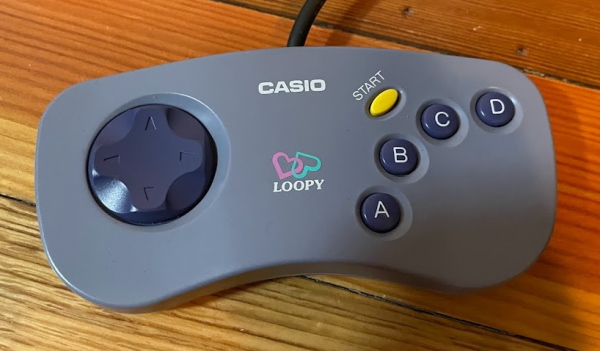 The Casio Loopy’s controller is a pretty simple affair; amusingly, the layout may be better for Neo Geo games than SNK’s own Neo Geo CD pad, with the face buttons laid out in a semicircle. But sadly you wouldn’t want to play King of Fighters ‘97 on this; the buttons don’t feel great, with very little travel. For the Loopy, though, they get the job done and it’s comfortable in the hand. The system has just one controller slot. 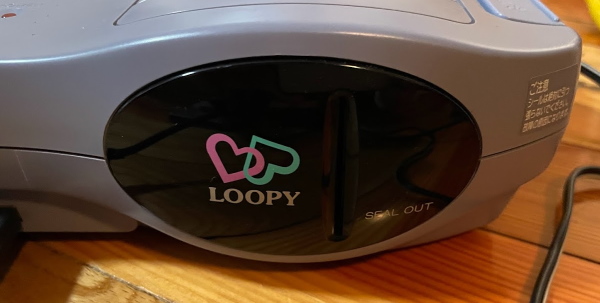 This slot on the front is where the printer outputs. The printer is, as we’ll see, kind of the whole point of the Loopy. The printer prints small stickers, or as the console calls them, “seals”.

Don’t turn it on…

So, let’s take this girl apart. It’s just held together by cross-head screws on the bottom; somewhat oddly, as the cartridges do use the infamous “Gamebit” security screws. 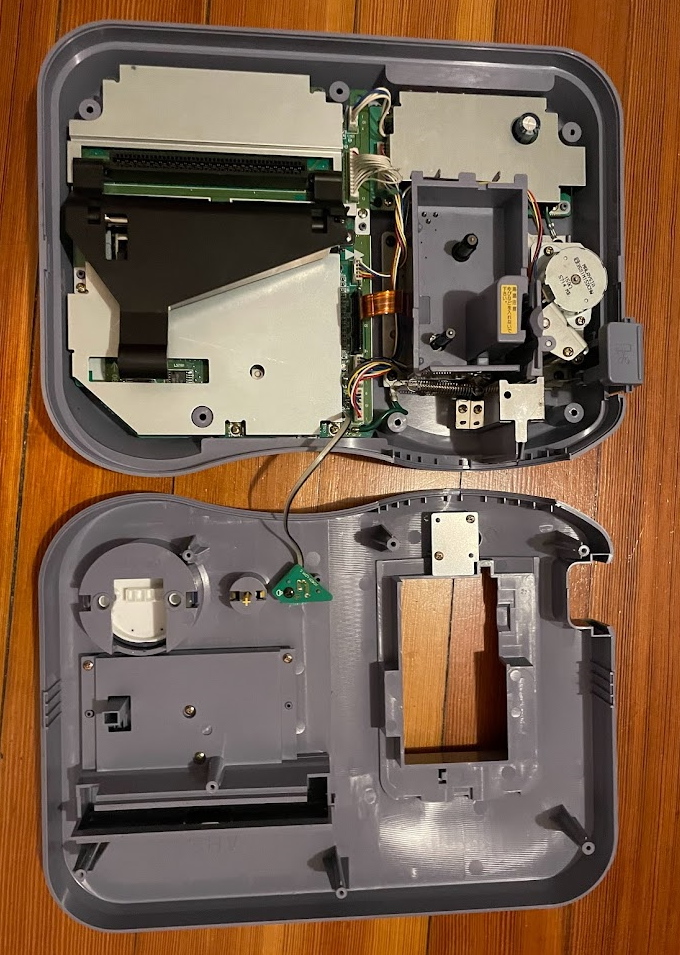 Inside we see that only a single LED is connected to the top now. In the bottom, we see two circuit boards, and the printer mechanism. Notice that the button with scissors on it controls a small bit of scissors that is completely internal to the console, so that there’s no risk of a child cutting themselves. That’s used to separate your pictures. 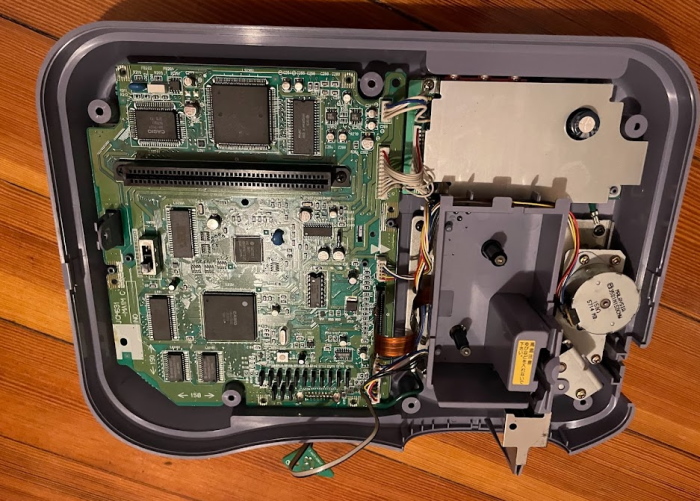 The cartridge eject mechanism, which uses a spring, is a huge pain to remove; it was an even bigger pain to put back on at the end. So look forward to that. Inside, we see the bulk of the circuitry is here, including the SH7021 CPU. 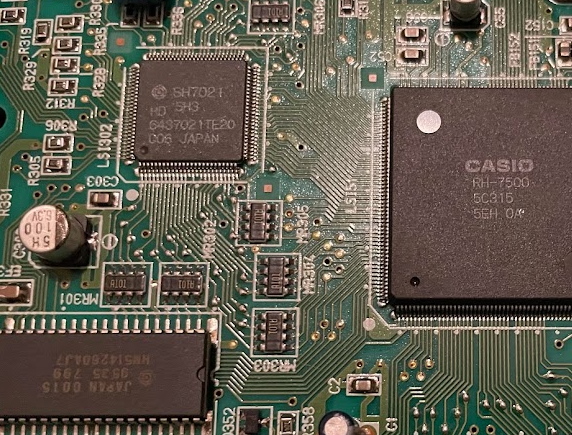 Near the CPU we can also see a Sony CXA1645M RGB encoder. This creates the composite video output, which just goes to an RCA plug on the back. 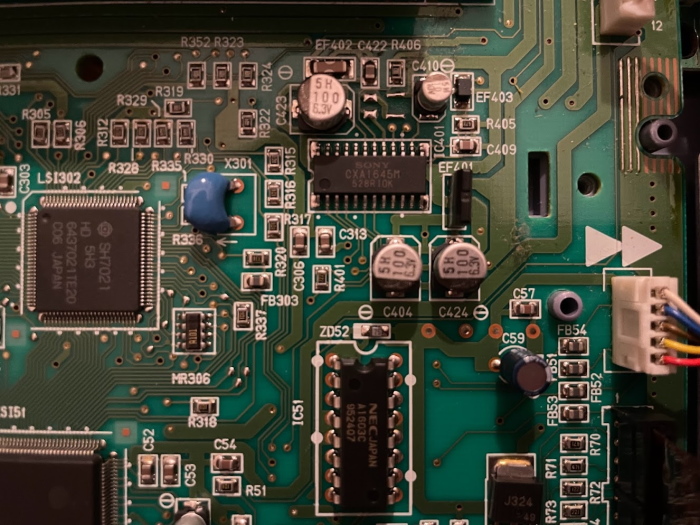 The CXA1645M would be a prime place to add an RGB mod, if one wanted better output. However, it being a surface-mount chip makes things a little more tricky to solder to, so I ended up not bothering. For now I think composite is more than enough. 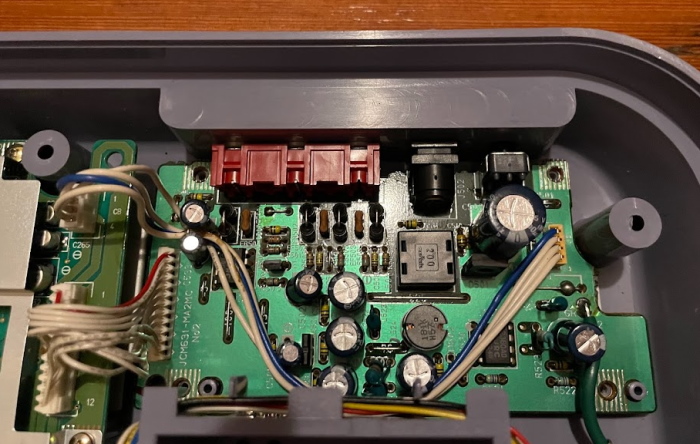 The smaller circuitboard is just for power regulation, and it has the actual RCA jacks for audio and video. Interestingly, the power supply that came with the Loopy outputs 24V DC, which is quite a bit higher than most game consoles of the period.

The games are cartridge-based. This is a bit of a surprise, as this came out the year after the launch of CD-based consoles like the Sony PlayStation, the NEC PC-FX, and the Sega Saturn. This may have been a cost-saving move for the main console; the game consoles not only contain the game ROM, but also the SRAM used to save the game (there is a battery soldered to the opposite side of the PCB).

So what kind of games did the Casio Loopy have? According to a Eurogamer interview, Loopy engineers Tetsuya Hayashi and Kunihiro Matsubara state that they didn’t originally design the console with women in mind; the goal was to provide a unique experience with the stickers. Since young girls liked to play with stickers, that became the target later as the launch lineup was drawn up. By the time commercials were made, the target audience was clear.

Which leaves us in a bit of a pickle. I am not a preteen Japanese girl. As a child, I wasn’t really into stickers as their impermanence bothered me. So I’m not sure I can judge this console fairly…

But hey, since when has that stopped me? 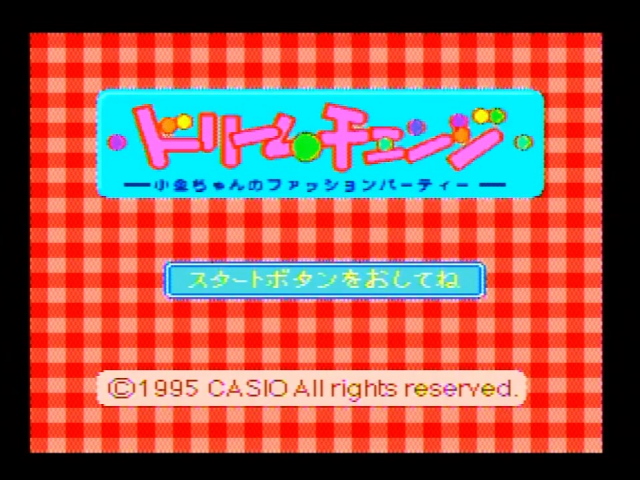 Dream Change is a dress-up game. It’s pretty clear to see what the appeal of this game is to the target audience; you get to choose outfits for your character. 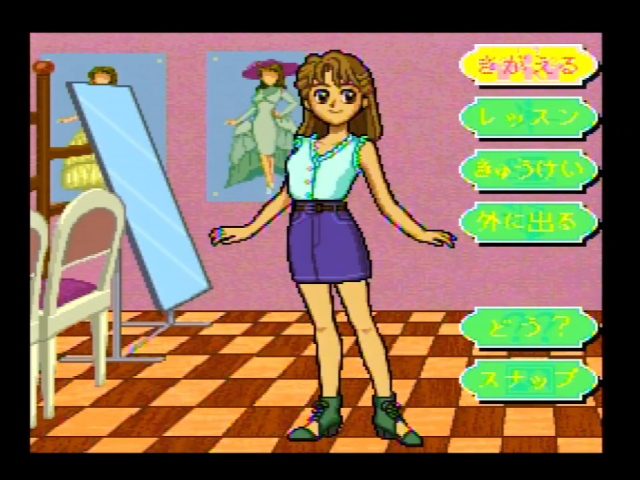 Gameplay is controlled through a system of elaborate menus where you can choose the different components of the outfit. 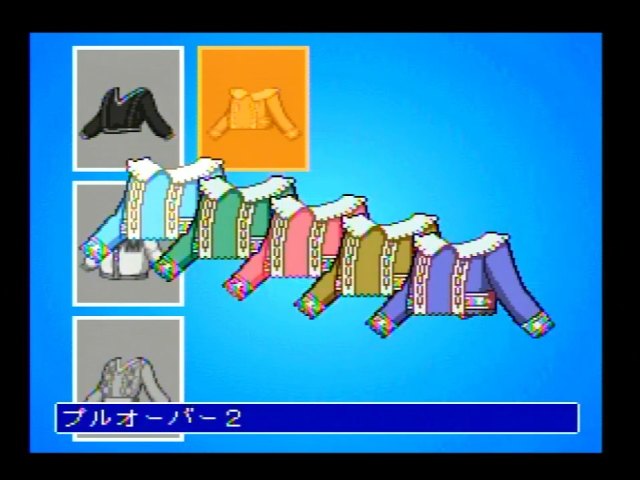 It’s not just a sandbox; your outfit can be judged by the game, and meeting the requirements allows you to take your model to various settings. Here, I’m told that I need to do a better job coordinating between heavy and light. At least he’s smiling while doing so. 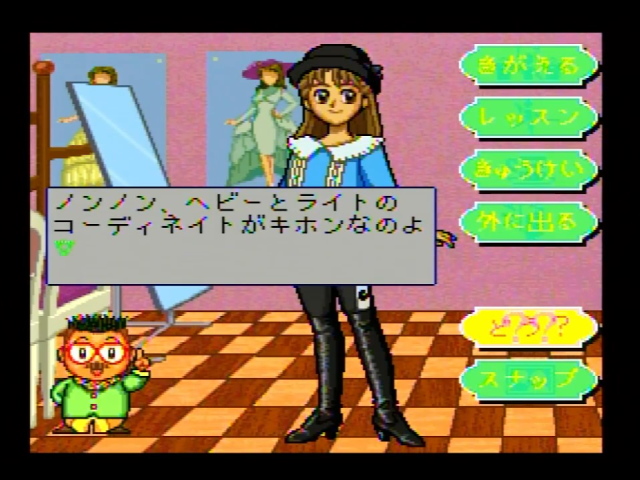 But enough talk. Let’s print a sticker. I’ve got a whole unused new old stock package of sticker stock for the Loopy. Now, the fact that these are so still easily attainable may be a bad sign for the Loopy’s success, but hey, it doesn’t know that. 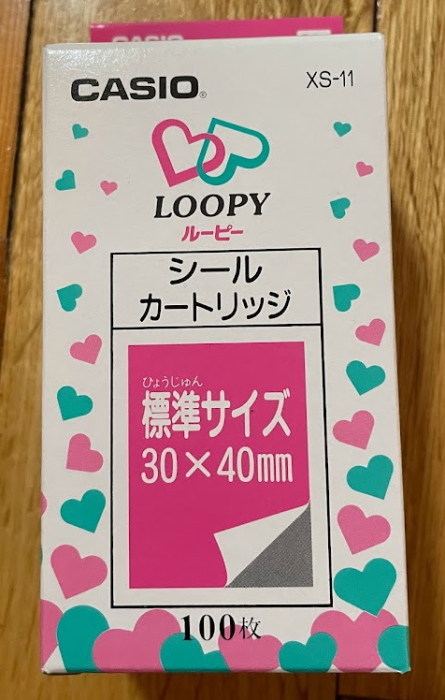 Here’s my girl in her outfit. Even though the game doesn’t like it, I want to remember it, so this is what I want to print. 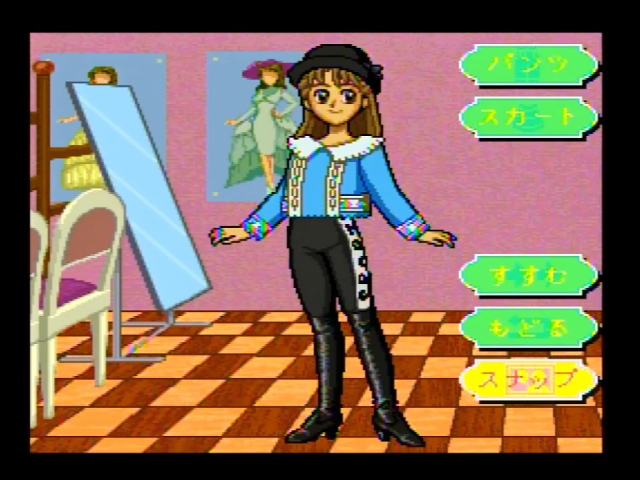 The print goes pretty fast; you can tell that it prints in color as it has to pull the sticker back in and out for each layer. Let’s take a quick look at a 1200dpi scan from my struggling Canon scanner. 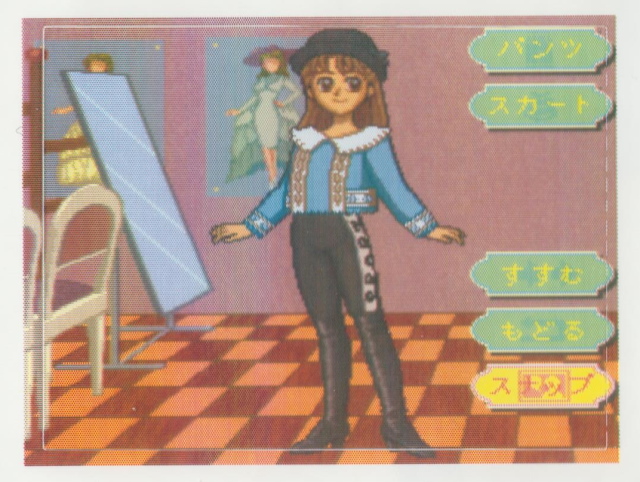 Forgiving the fadedness, which is from the scanner as we’ll see better colors in the photo below, it looks pretty good; this close up, you can even see detail that the Framemeister-assisted composite capture masks with rainbow bands. The sticker area has quite a bit of “overscan”; for example, the bottom of her shoe will be cut off when I peel it. 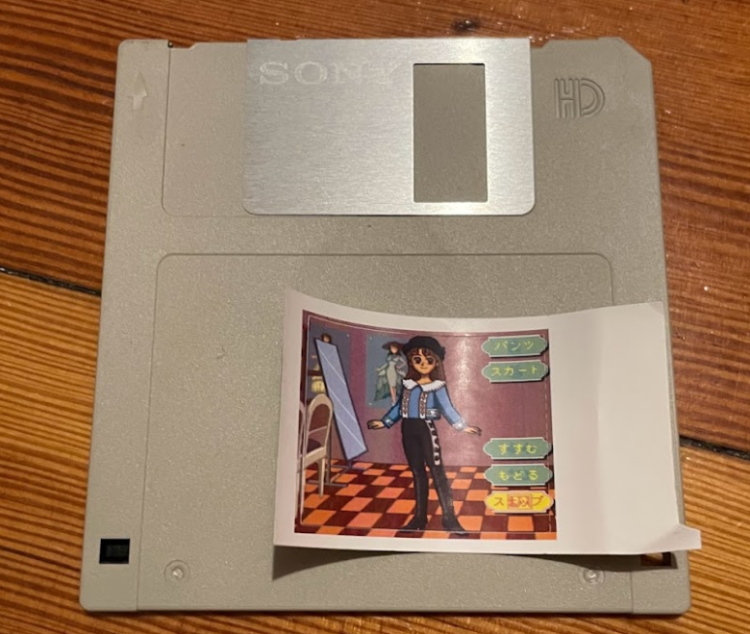 The thing that’s a real shame, though, is the size. Compare it to a 3.5” floppy disk, as was common at the time, and you can see that a Loopy sticker won’t even cover the entire label area. When you consider the commercial for Little Romance, a game that I don’t have, but which suggests using the seals as panels in a comic book, you can see that they’re pretty tiny for that role. I guess kids do usually have better eyes than adults.

Bow-wow Love Story seems to have been one of the more popular games for the system, judging by its wide availability in the aftermarket. It’s an adventure game published by Casio and developed by Alfa System, who also developed Dream Change above, and are credited with contributing work on many great PC Engine games, like Hudson’s port of Ys I&II. They’re also still in business. 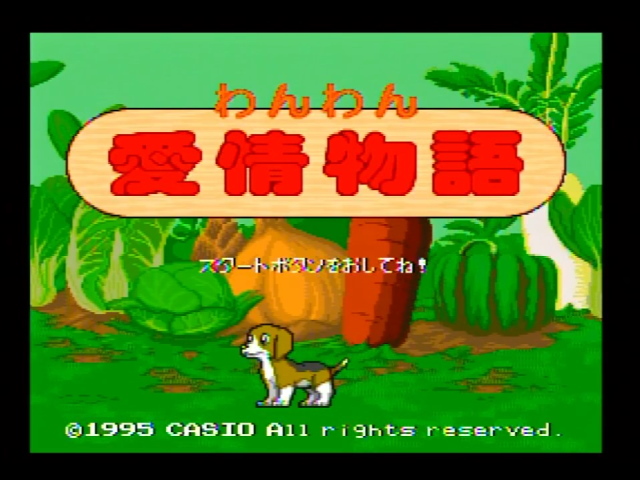 The game itself is an adventure game telling the story of a girl and her dog. The game is of course all in Japanese, and the story may be too cutesy to be appealing to anyone over the age of 14; it is worth noting that there is a game here, for example, the action segment below, where she combats Miracle Lemon. Should she lose, her eyes will be in pain from the sour lemon juice, so be careful! 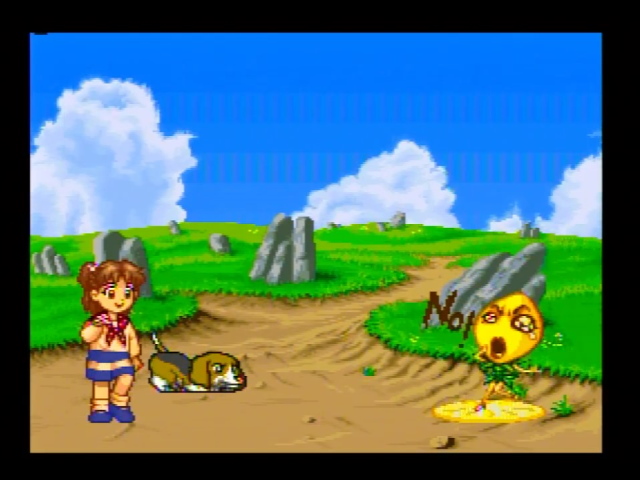 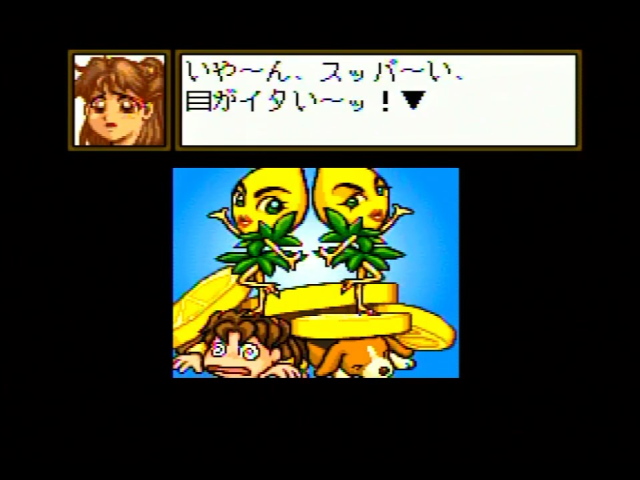 The stickers in this game definitely come off more of an afterthought than Dream Change; a separate section accessible from the title screen let you print stickers based off of locations you’ve been to before, or special moments. 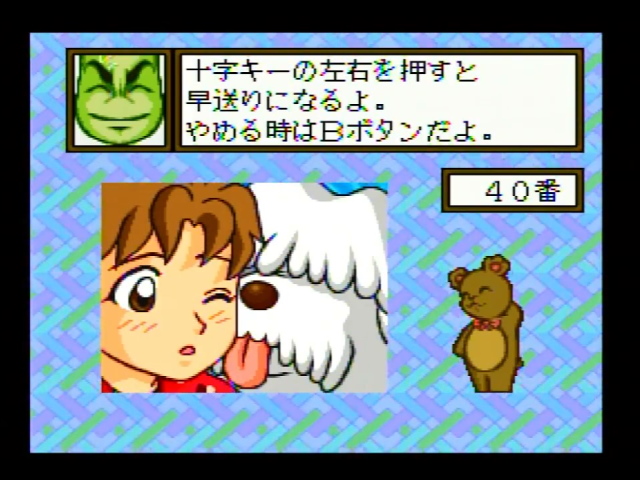 This might remind you of The Legend of Zelda: Link’s Awakening DX, or Super Mario Bros. Deluxe on the Game Boy Color, which supported the Game Boy Printer. And I think that’s a pretty good comparison here; I think had Nintendo somehow ended up in a Philips-like deal with Casio, a port of Super Mario Bros. Deluxe to the Loopy may have been a success. Someone get on that. 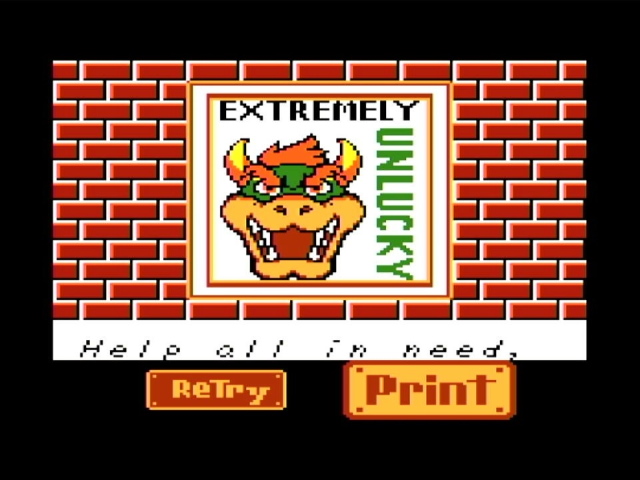 The Casio Loopy, more than any other piece of hardware I’ve looked at, makes me feel like Julius Caesar above. What I can say, though, is the facts: the Loopy was not a very successful system. In fact, FEMICOM Museum states that only one production run was made, and Octavius’ video review says that the console was discontinued a few weeks after launch.

There is a little bit more I’d like to say about the Loopy, but that’ll have to wait. And as for whether I’m going to be making Aspect Star “L”? Uh, don’t hold your breath. 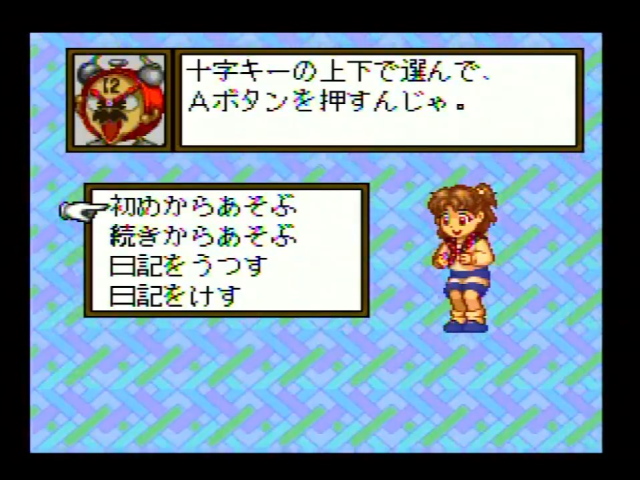