The system I constantly come back to here is the Pioneer LaserActive, which overlaid either NEC PC Engine/TurboGrafx or Sega Genesis CD graphics on top of analog LaserDisc video. But the LaserDisc as a format dates back to the 1970s; there was nothing stopping this from happening much earlier. After all, the Pioneer PX-V7 MSX computer was made to overlay video and it dates back to 1984. And so now we see, the LaserDisc gaming existed too. BONUS: Things break!

One thing we didn’t cover in the Pioneer PX-V7 article was the fact that on the rear of the system, there is an 8-pin DIN port. If we look in the user manual of the ER-101 (a very similar Pioneer product), we can get the pinout.

There are three connected lines. What are they for?

The fact that LREMOI is the remote control protocol makes it very bothersome; as you’d hope that later LaserDisc players would continue using the same standard. Unfortunately, I don’t know of any easy way to get LACK from a LaserDisc player without the port. A real shame, as we’ll see.

So the player I went with was the LD-V2000. This was after getting an LD-707, which was unfortunately destroyed by shipping. This player seemed to work, though, so I found it quite promising. After all, on the back it has the all-important DIN. 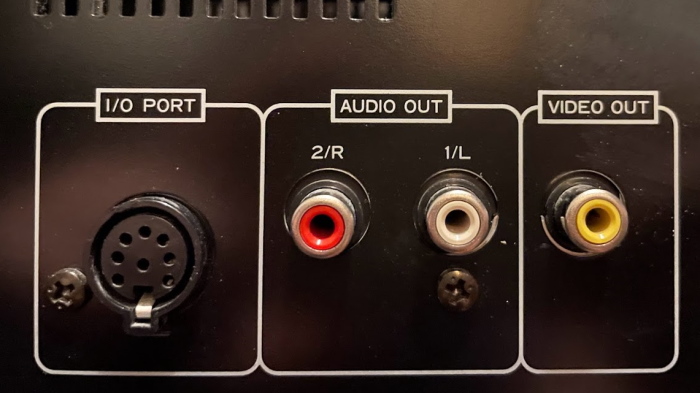 So now we have the player, what about the games? 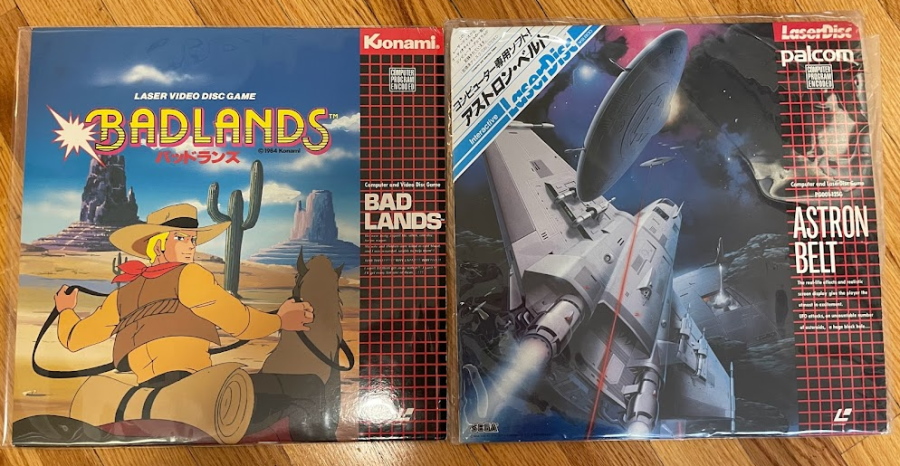 We’ve got two games here. Konami’s Badlands, and Sega’s Astron Belt. These are both arcade ports from the pioneering early era of LaserDisc arcade gaming. They’re both co-branded with the name Palcom, and it’s here I have a confession: in the last article, I implied that the Palcom branding had something to do with Konami’s European version of Ultra Games. However, I can’t find any evidence that Japanese Palcom actually had anything to do with Konami, other than publishing Badlands. It seems to have been a Pioneer operation.

The LaserActive worked by using the digital audio section of a LaserDisc as a data storage section. However, that won’t work here, as digital audio was only introduced to LaserDisc in 1985. The LD-V2000 can’t play digital audio at all! So what happens when I boot into P-BASIC and type CALL LD? 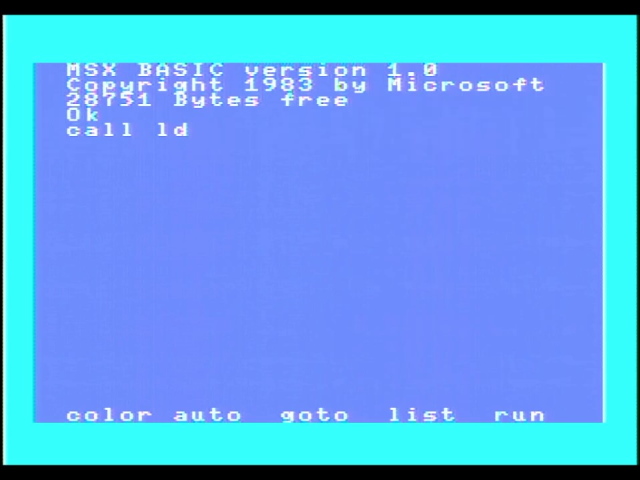 LaserDisc is an entirely analog format in 1984. But MSX computers already could run from analog storage media in the form of a cassette tape. 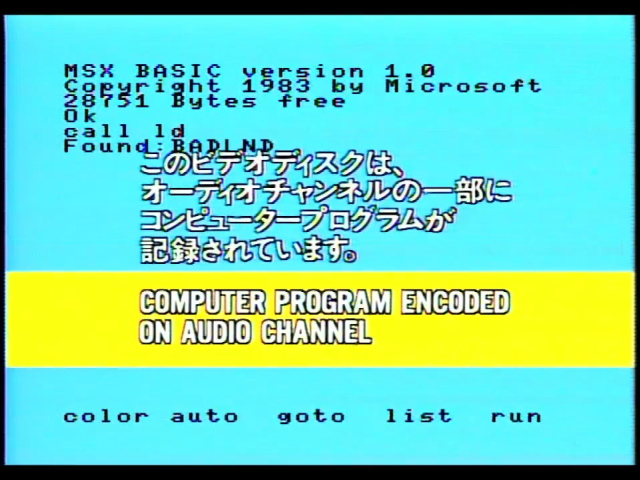 It ends up working very similar to the Atari 800 stereo cassettes. The program is stored on one of the two stereo audio channels. This audio channel is muted, so the user doesn’t hear the whine unless you play it on a normal LaserDisc player. The video portion of the LaserDisc is used basically to showing a loading animation that also has audio on the other channel. In the case of Badlands, it also has a very psychedelic Konami logo. 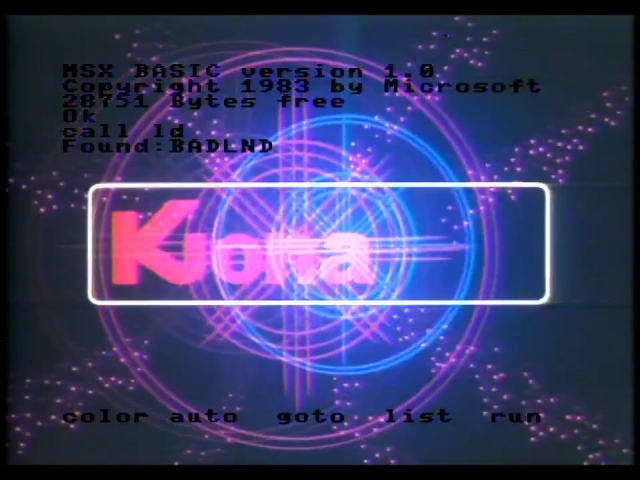 But don’t get me wrong. This is an MSX game, and everything outside of the MSX is made by the PX-V7’s TMS9928A. 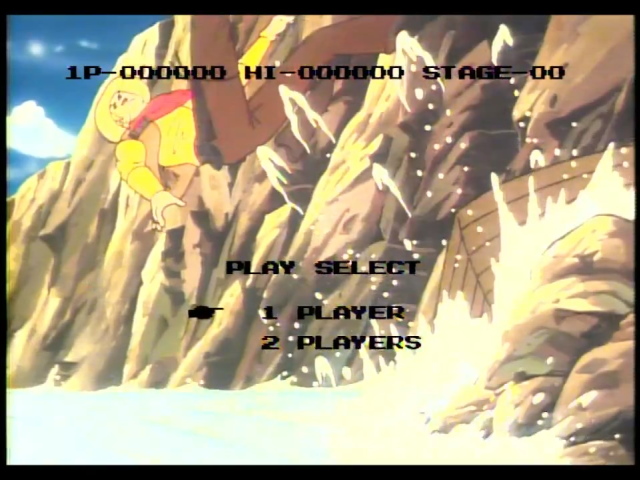 Badlands is a single button game. The entirety of the game consists of shooting at the right time. If you shoot at the right moment, the LaserDisc player will move to the next segment. If you don’t, it will instead display a death animation. Despite the story of the game being very dramatic, the deaths are quite silly. All this switching means that the Framemeister is very much the wrong upscaler for the job, and I only used it for these early screenshots because it was there. As we’ll see, I was lucky to be capturing anything. 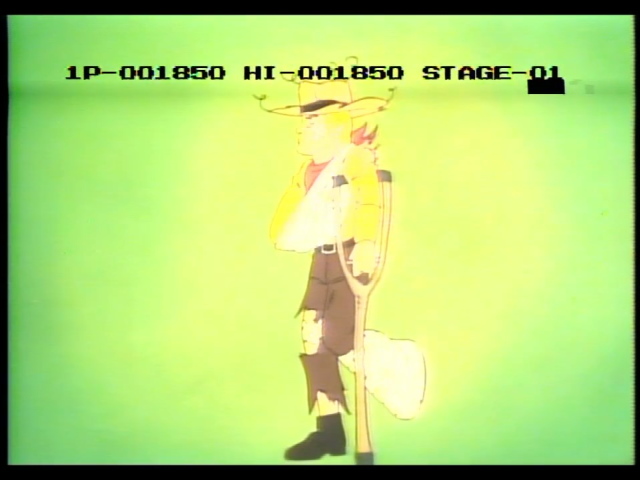 Now, that being said, I started to see an issue here; if you look at a video of Badlands, you’ll see that the text should be white on the one/two player select, and that all “overlaid” images are coming out black. This doesn’t seem to impact playability in this case, but it made me concerned about the next one.

The LaserActive used 240p-encoded 60fps video, without interlacing. However, as far as I can tell, the Palcom MSX games just use the regular 480i LaserDisc encoding. This means that they may be higher resolution than a LAserActive game, in some sense.

Astron Belt was the first Laserdisc game to ever be announced, but it was beaten to market by Dragons’ Lair. It is a space shooter which overlays your fighter on top of the image, similar to crosshair shooters like the LaserActive title Vajra Ni, but not quite. But we’re not here to review Vajra Ni. So let’s do a CALL LD and get this show on the road. Like Badlands, Astron Belt has an MSX game encoded into the beginning of one audio track. That means that this isn’t just the same LaserDisc as the arcade version. 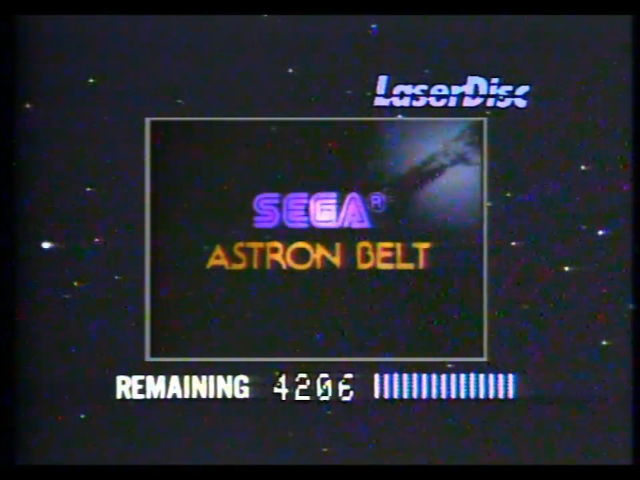 Unlike Badlands, Astron Belt has a dedicated loader rather than using the game’s attract mode. The loader shows game graphics in a compressed window. (I also notice that this LaserDisc is much more grainy than the Badlands one, really too bad) The nice thing about this is that you know exactly how long you have to wait. 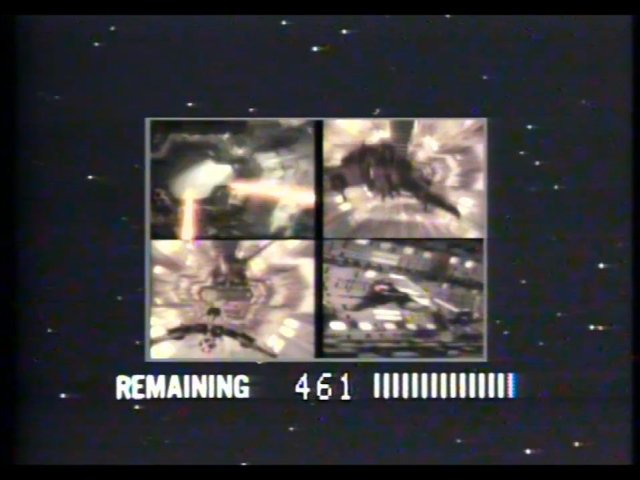 And then, at this exact moment, with 461 on the counter, the screen goes black and nothing happens. This happens easily reproducibly, but I’m not sure why. The LaserDisc plays just fine past this point on my LaserActive, of course, that doesn’t have the all-important IO port.

And then nothing played from the LD-V2000 at all, not even Badlands. In fact, leaving it on I started to smell smoke, never a good sign. 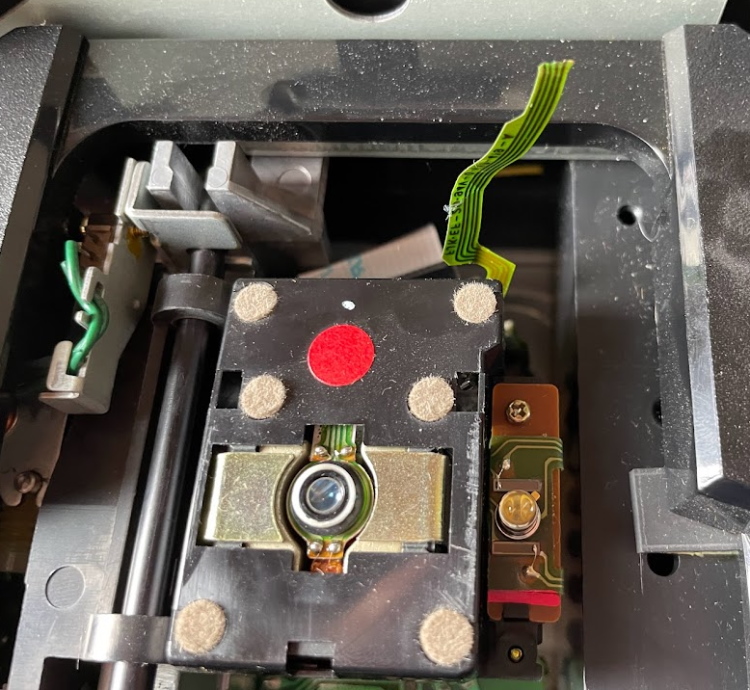 It seems that the carrier that holds the laser diode and the lens had part of it break loose and float around inside the case, being dragged aabout by the main lens. Something about the positioning of the particular Astron Belt laserdisc must have caused things to stop working at that moment.

Unfortunately, this flex cable is going to be very difficult to repair, especially on a moving part. So I’m not sure where to take this project; should I hold out for another player with the IO port, try to repair this one, or give up on the whole project (since the PX-V7 is also having issues)? I’m not sure. It’s a frustrating place to leave, but I guess that’s the risk you take with nearly 40-year-old hardware.