A “shaggy dog” story is a category of story in which a large number of words are used, but with a wholly disappointing and uninteresting conclusion. Why do I mention that? No particular reason. So, the Service Manual for the Sega ST-V Saturn-based arcade board mentions the existence of a “MIDI OUT” port. But what does that mean?

It’s All In The Manual 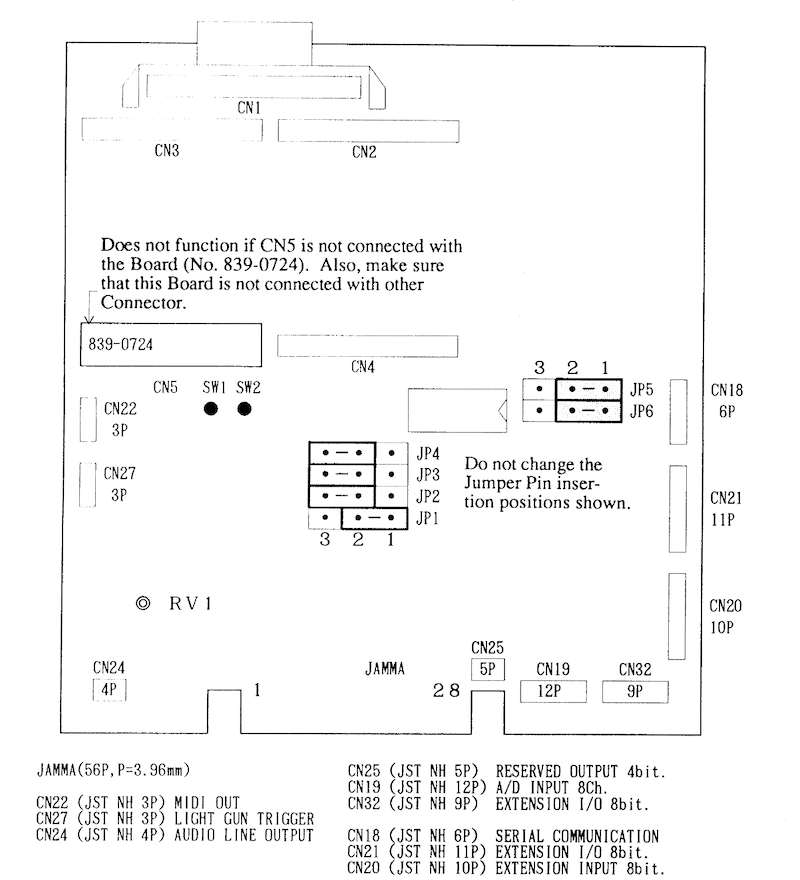 The Sega ST-V service manual doesn’t say much more than this. A three-pin connector, JST NH 3P, labeled “MIDI OUT”. It doesn’t go into detail, beyond mentioning that for additional connectors, you should look at their manuals. But I haven’t been able to find any service manuals mentioning it.

What is this MIDI, anyway?

Let’s back up a second. What is MIDI? Those primitive sound files that propagated all over the internet in the 1990’s, before internet connections were fast enough to transfer MP3 files instead? Well, no. But also yes. 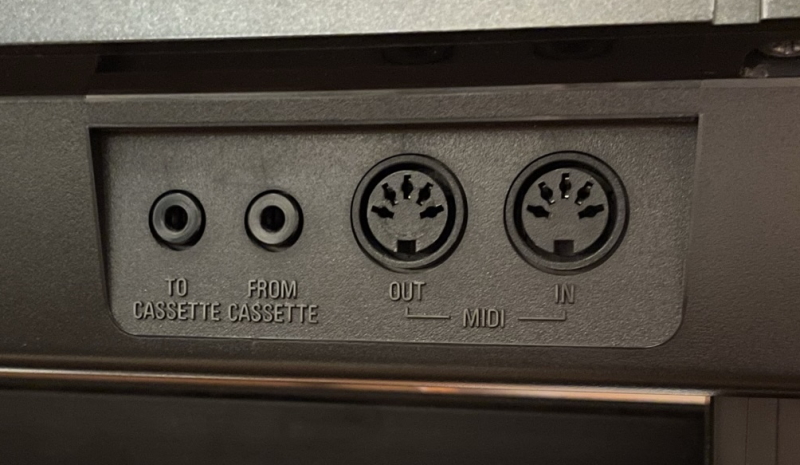 MIDI, the Musical Instrument Digital Interface, was standardized and promulgated in 1983, but remains the dominant way to connect musical instruments, like my ~1989 Yamaha Electone ME-50, to computers. MIDI is a serial protocol, and rather than send, say, PCM-encoded audio, it sends digital messages. These messages are things like “this particular key on this keyboard was pressed down”. A “MIDI file” is just a stored series of those messages; it can take up a lot less space, but that means the receiver needs to have its own way to play the notes. (The distinctive sound many associate with Windows MIDI files comes from a Roland sample pack licensed by Microsoft)

Of course a number of computers did have MIDI support; the Atari ST even had it built in. “MIDI OUT” means that it sends out messages, and you’d connect it to a “MIDI IN” port on your device that could receive the messages. My Electone has both, but many devices just had an in or out, so there’s nothing strange about the ST-V in that regard. 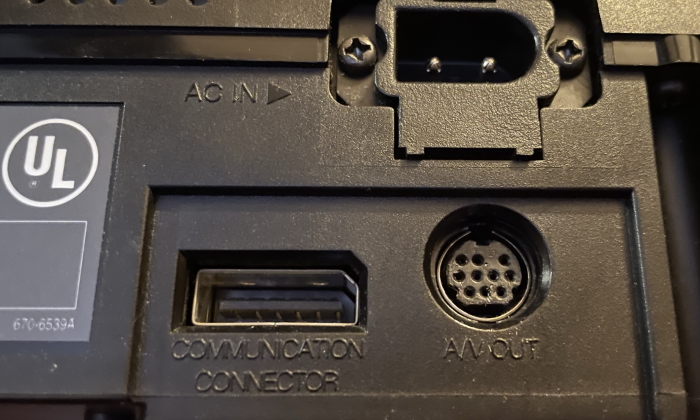 Rodrigo Copetti notes that the SCSP, the Saturn Custom Sound Processor, has MIDI support, and even on the Saturn it’s output on its rear “communication connector”. This connector was pretty rarely used, but there was an adapter to 5-pin MIDI sold in Japan.

The SCSP actually has two MIDI outputs, for MIDI IN and MIDI OUT. Take a look at this schematic from a PAL Saturn service manual. 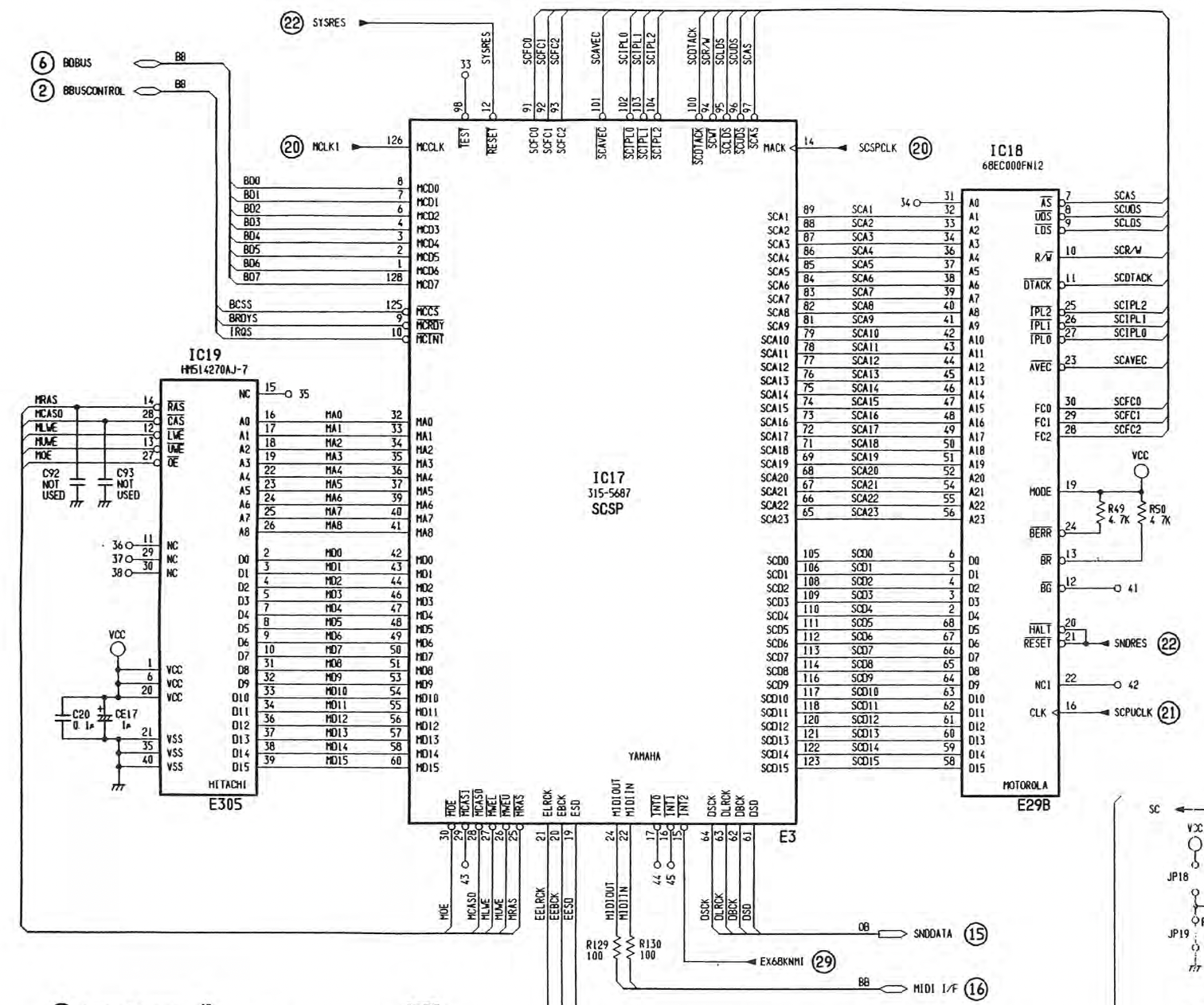 As you can see, the SCSP does quite a lot, and has quite a few pins. One of those things is MIDI– and yes, exactly the same SCSP is present on the Sega ST-V. 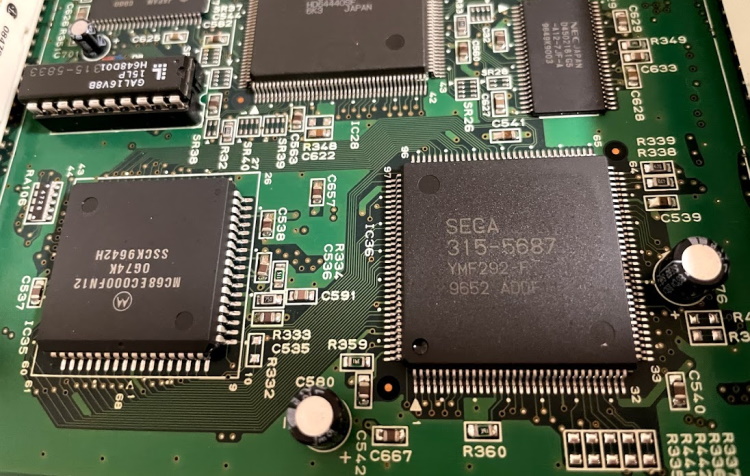 The other thing to note about the Sega ST-V is that it’s cartridge-based, and that includes the audio. Listen to two tracks below, both from Virtua Fighter Kids; it’s the theme of Sarah. Not the best capture in the world, but the distinction is pretty clear. The Saturn version uses CD-quality audio. The ST-V version… doesn’t.

Remember when I said that MIDI commands were very space-efficient? So it seemed very possible to me that a MIDI stream of data is used on those ROMs, and if we were exceedingly lucky, the ST-V was outputting it as well, possibly for debug purposes. And if that was the case, we could do some fun stuff, like hook up the ST-V to a synthesizer.

But this is all hypothetical, and that’s a lot of ifs. And I’ll be the first to admit that this probably won’t work, and spoilers: Don’t get your hopes up.

Since we last met, I installed a acrylic plate cover on my ST-V from Lions3; this is just to protect it and give it a more console look, but in any case, the connector we want is on the edge and accessible.

Now, what’s the pinout? That’s actually a bit of a problem– it’s not listed anywhere. Pin 3, the one furthest to the left, is definitely GND. But the other two don’t seem to be. MIDI is a serial protocol, but it also wants a current sink pin; usually accomplished by attaching pin 4 of the connector to 5V through a 220 ohm resistor. Neither pin is attached to 5V through a resistor; both seem to be connected to an IC.

So let’s remove the acrylic top and break out the multimeter. Unfortunately, I couldn’t find anything– MIDI pins are supposed to be isolated, so this isn’t surprising, but it was frustrating. (The ST-V board is multi-layer, making it hard to follow) Finally, on a whim, I decided that pin 1 would be the current sink and pin 2 was the current source. This was based on absolutely nothing, with the knowledge that I could fry my ST-V or my USB to MIDI device.

There is a switch on the ST-V circuit board, SW1. If you hold it while booting, you get to go to a special place. 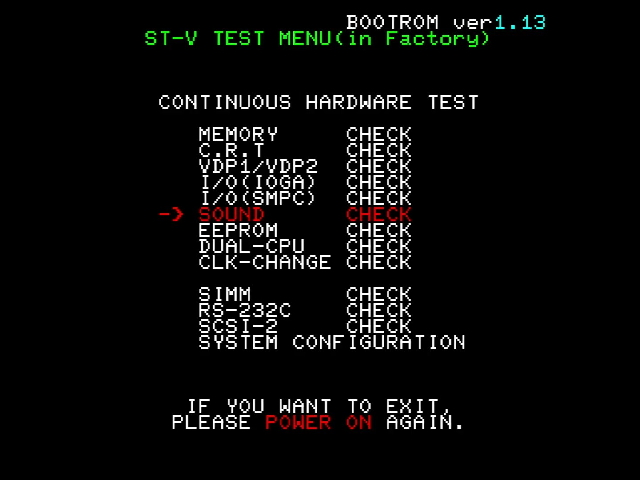 A factory test mode! One useful mode here is the SOUND test menu, which allows for things like playing a sample stereo sound, but also has a test option labeled MIDI COMMUNICATION. The old MESS source code notes that it was a bit mysterious and always failed on real hardware, though this note isn’t present in modern MAME’s source. 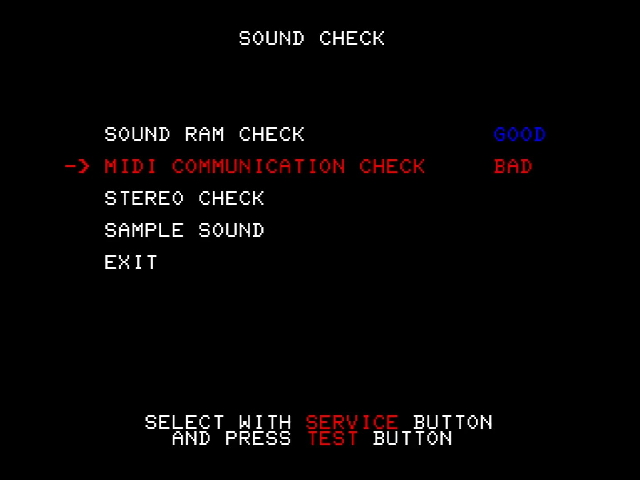 So, with the wiring as above, we get an exciting display: MIDI communication is now good! 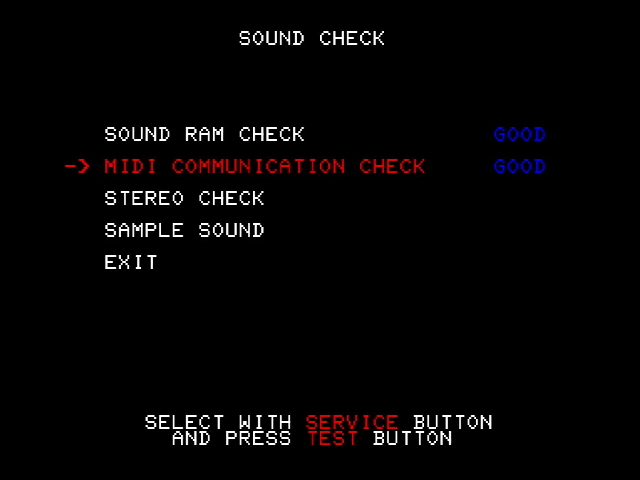 Unfortunately, it seems to also work if I reverse the two pins and use pin 2 as the sink and pin 1 as the source. Even worse, my computer doesn’t actually receive any MIDI messages. I tested the USB MIDI interface and found it worked fine with my older Yamaha Electone, and even flashed when a packet was received. No flashing occurred on anything I tried with the ST-V. I even took a look at the oscilloscope.

It looks like the Factory test MIDI COMMUNICATION is only looking at whether anything is connected to the MIDI OUT connector’s pins, rather than awaiting any particular signal from a connected device. So it doesn’t tell us very much. What possibilities remain?

I assume that some readers have been screaming like a viewer of a horror movie, noting that again and again, the MIDI port is being listed as associated with communication. It turns out that the Sega NAOMI system, successor to the ST-V (of sorts), had MIDI, but used it to communicate with devices; for example, the force feedback motors for driving games. (The Sega board for this was called “SERVO MOTOR DRIVE BD MIDI”, part number 838-14174, seen in manuals like this) It is just a convenient serial protocol, after all.

I’m not sure if this is true of the ST-V, but I found one thing that might imply that it is. This is from a Print Club 2 ST-V board being sold by Quarter Arcade; it’s from a sales listing so I’m not sure if I really have permission to grab the picture, but hopefully they’ll just see it as advertising for their listing. 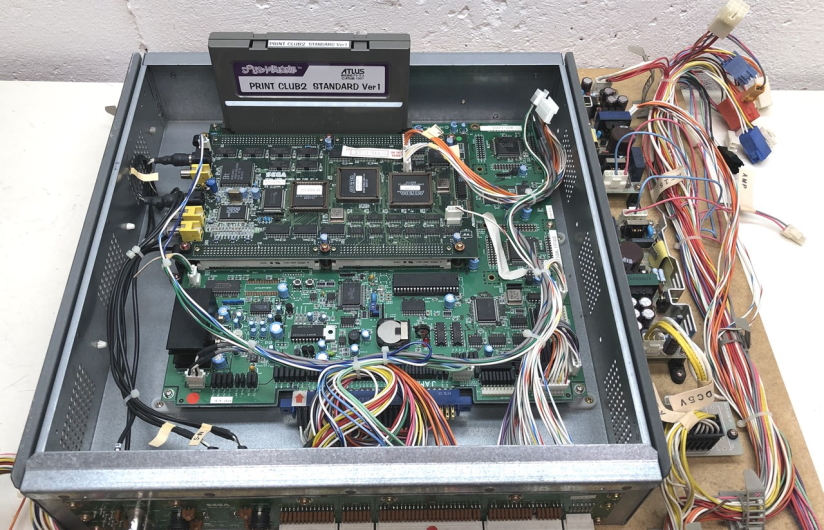 Notice that the wiring harness included connects to CN22. Unfortunately, this listing doesn’t include any of the Print Club 2 hardware (other than the board attached to the ST-V, which I believe governed the special video hardware), so I’m not sure where or if that wire was connected to, and I don’t have a Print Club 2 service manual. 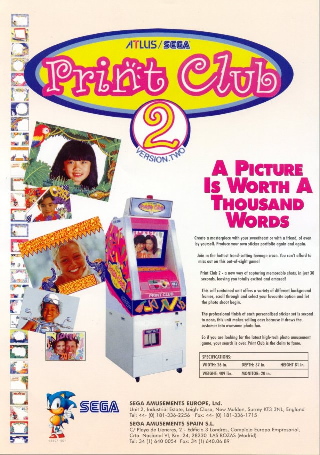 Print Club 2 is part of Atlus’ series of machines that combined a camera and printer with an arcade board, allowing users to take silly pictures and use the computer to augment them and print them out. Very popular in Japan, but not so much anywhere else. Cartridges could be switched out for various packs– thanks to Print Club 2, the Sega ST-V would actually get a Pokemon-series game.

And, it seems, at least some of that hardware may have been controlled by MIDI; most likely as a convenient serial interface. In the end, the dog just wasn’t very shaggy.