In 1988, HAL Laboratory released three NES games, ports of the arcade games Defender II, Millipede, and Joust. One doesn’t associate HAL Laboratory with arcade games, but in 1988 HAL didn’t have the reputation it did today. So one might think that these are just some random games. Sure they’re primitive for 1988 NES games, and all three games were well past their prime, but the NES was weird about that. But surprisingly, it turns out there’s a story here. (Also, if that wasn’t enough, a long digression on Millipede)

Music is the key

Defender II– well, actually, Star Gate, but it’s Defender II sometimes too– is an arcade game from 1981. And like many games from the period, its attract mode has no title screen music. But on the NES, HAL Laboratory gave it one. A jaunty little tune that may sound a bit like Mike Tyson’s Punch-Out. A little odd for a space shooter, but hey.

And finally Joust, another Williams title also from 1982, has no title screen music in its attract mode. And HAL Laboratory gave it something…

All three titles by HAL Laboratory. All of them are arcade games to which Atari (specifically, the Atari Corporation, Jack Tramiel’s side of the company, that made the ST and released the 7800) owned the home rights. Is there some connection? 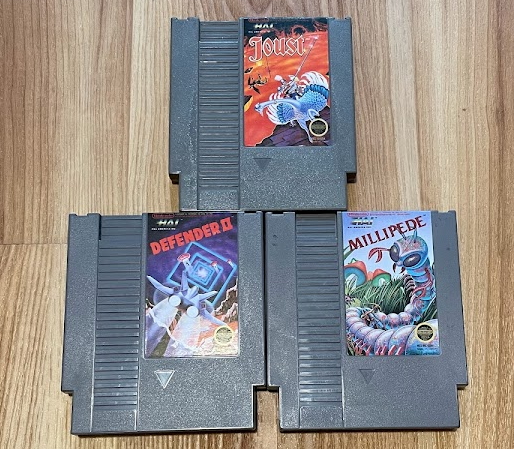 In 1984, Nintendo showed off its plans to release the popular Famicom console in North America: the Nintendo “Advanced Video System”. This would be the second incarnation, and would change quite a bit as the 1985 “Nintendo Entertainment System” we all know and love. (We all especially love its main innovation over the Famicom, the lock-out chip)

But it wasn’t the first time Nintendo would try to sell their console in the US. Their initial attempt was to partner with juggernaut Atari; not Tramiel’s Atari Corporation, but Warner’s Atari Inc. Apparently, this fell apart because of a dispute over Coleco’s packaging of Donkey Kong with their ADAM home computer. (Atari execs also seem to have felt that the 7800 was a superior system)

And that is the origin of the three titles: spec work, with Nintendo reaching out to the 6502 experts at HAL Laboratory (who had previously worked with Commodore to make games like Rally-X clone Radar Rat Race), including the famous Satoru Iwata, to port some of Atari’s then-popular titles to the Nintendo hardware, and show it off. A deal at the dawn of the NES.

It doesn’t quite add up 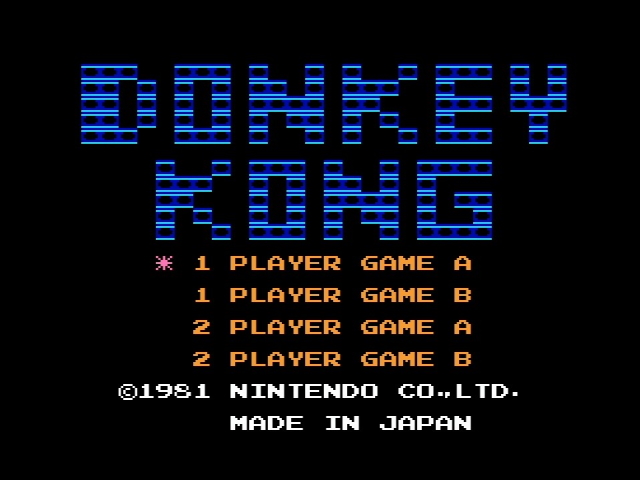 There’s a distinctive “look” to early NES games. The use of “A” and “B” difficulty– which the three HAL ports do have– is part of it, sure. And the title screen music fits right in. But you also see things like the “Atari” 8-bit font, or the style of the title screen text.

And most of all, what do you see when you open up Joust? 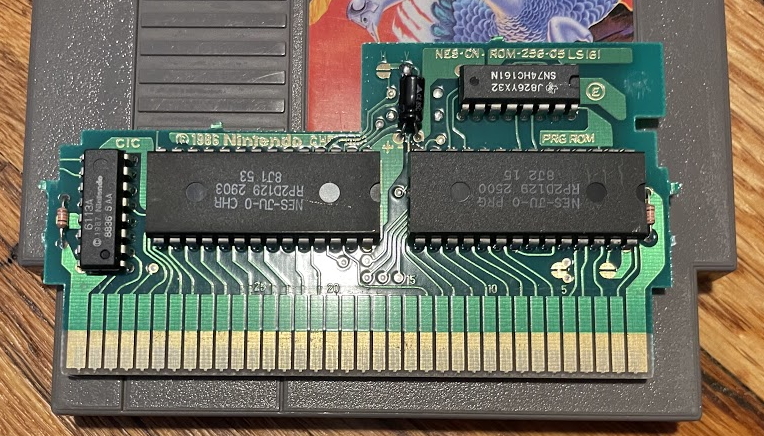 That’s CNROM. CNROM is an early Nintendo special board, it’s first release though, was the early 1986 Gradius. Now, Joust is an oddball CNROM:

Now, that’s a bit hard to tell looking at the circuitboard; in fact, the same CN-ROM-256 board was used for common 64kiB CNROM games like Adventure Island. And certainly, it’s possible that CNROM could exist in 1983; it’s just powered by a 74HC161 logic chip, those definitely existed. But it seems unlikely.

And in fact, it turns out, it seems entirely wrong. Now, Defender II and Millipede are both period-accurate NROM games. But Joust gives away the game: these three aren’t the 1983 spec project games.

How do I know? We have the 1983 spec project games to compare! Or at least, something closer to them.

Rushing it out in Japan 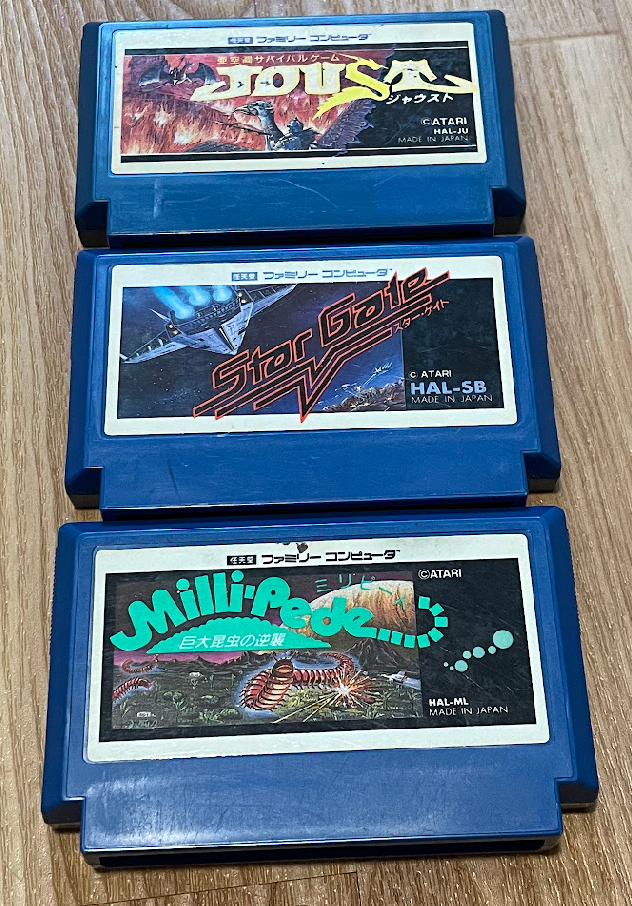 The three games were released in Japan in 1987, in matching cute blue cartridges. 1987 is still pretty late for some basic 16kiB program ROM NROM games, but it’s a little more reasonable? And take a look at the title screen:

The same cheery song– likely from Nintendo composer Yukio Kaneoka, who goes uncredited here but also worked on Punch-Out!!– but a much more 1983-appropriate title screen that jumps right to the A and B difficulty. Without the extra CNROM graphics bank, the “Welcome to Joust” screen is a lot more boring too.

It’s worth noting that the Japanese version is closer to how Joust in the arcades worked. (Screenshot from MAME) 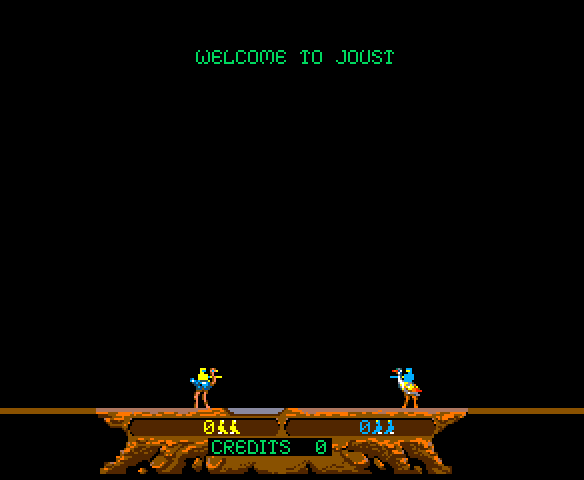 In general, while none of the other games introduced a mapper, all three games have at least noticeable differences. For example, going from Star Gate to Defender II the ship and other sprites have been redesigned, and Star Gate only shows your score while the pre-level jingle plays, not during gameplay for some reason.

Milli-Pede (that’s how the name is spelled in Japan) features a more arcade art-accurate title screen and a less interesting screen border. 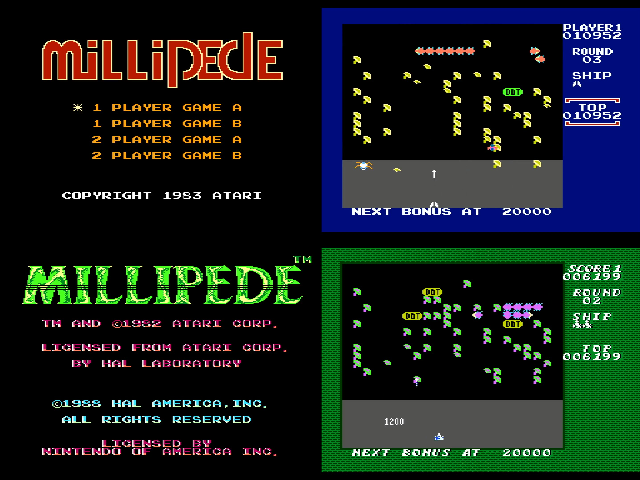 Admittedly, my main basis for assuming these versions are near-identical to the 1983 spec project is the title screen. “COPYRIGHT 1983 ATARI” is pretty odd for a 1987 game otherwise, isn’t it?

In both Milli-Pede and Millipede, when you kill the titular arthropod, the screen moves, dropping the mushrooms onscreen downwards. In the NES version here, that is quite abrupt-feeling, and for me interrupted the flow more than on the arcade or other versions. Let’s slow it down and see what it’s doing.

The problem is that fancy game border. See, the NES can only draw a small number of bytes of VRAM each frame. Usually this is fine, because the system also has hardware scrolling; but the NES only has one tilemap. With that border taking up space, well, you have to do the scrolling by hand.

But don’t take my word for it. Ask contemporary Namco programmer Ed Logg.

In 1986, it seems Namco was working on a port of the game to the Famicom, which fell through because of a rights issue; very possibly the fact that HAL already had a ready-to-go port. However, some data for it belonging to developed Ed Logg has been used to reconstruct a playable version. Of course, this is a development prototype. 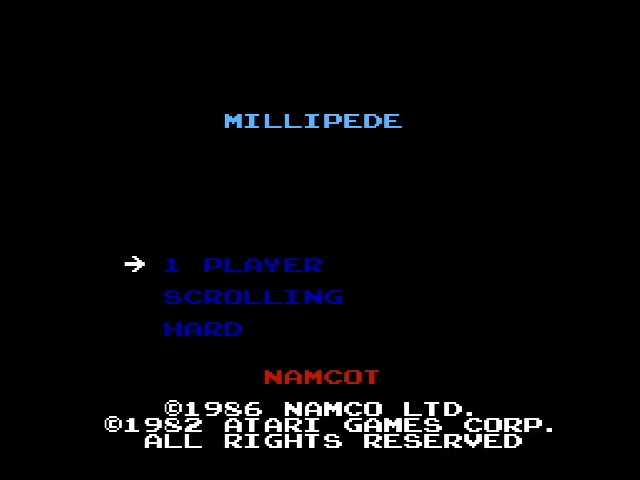 The big difference between Namco’s version and HAL Laboratory’s, other than the HAL version getting to be completed, is that Namco’s version is full screen. This means that no attempt is made to match the arcade version’s vertical orientation, so it’s a pretty significant change. 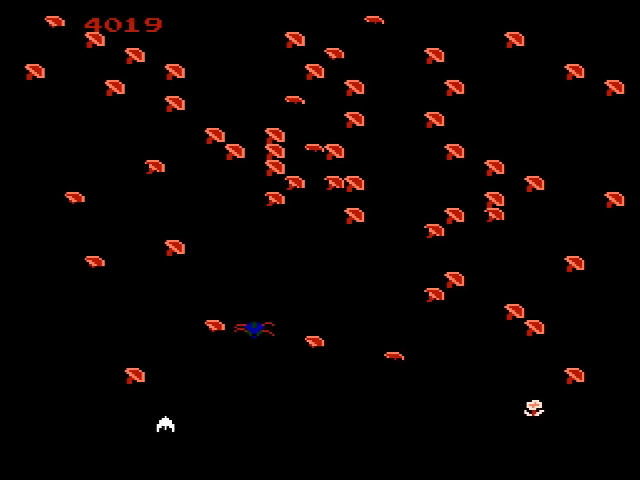 And with this change, Millipede can use hardware scrolling to drop the screen in just one frame. Well, it moves things upwards rather than dropping, and it moves the score too. Presumably these would’ve been fixed later in development.

It’s an interesting tradeoff here. And apparently one that was still being worked out, given the option to disable scrolling on the title screen.

The question must be asked: why did HAL Laboratory release the games as-is in Japan, and yet make many changes for the US market? It’s hard to tell. Judging by the ad in the back of the Japanese Joust manual, they were sold for 3900 yen in Japan, a fairly low price for Famicom games. Converting from 1987 Yen to 2022 Yen to United States dollars, that’d be only around $35 today. 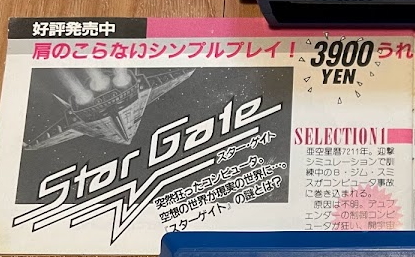 On the other hand, in America HAL was just in the process of launching their US publishing subsidiary– HAL America Inc., or HAI– and also had to deal with the more draconian licensing requirements. Unfortunately, I can’t find what price they sold at, but it’s definitely possible they decided to spruce up the games to justify a higher US price, and to look less dated. But it’s unclear, and unless there’s an interview with the people from the time I haven’t found, we might never know. 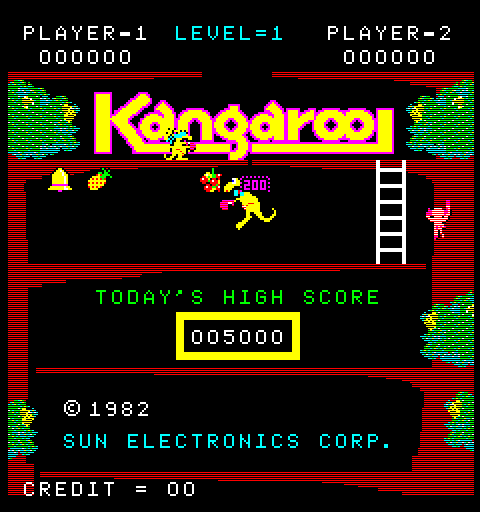 There was a fourth game as part of the Atari spec project, one that HAL evidently couldn’t get licensing rights to. Jeremy Parish theorizes that it was Sun Electronics’ Kangaroo, for which Atari had the US distribution rights. With Sun Electronics (as Sunsoft) going on to be a major Famicom and NES powerhouse in its own right, it’s no wonder they didn’t give HAL the sign-off. But who knows; a cartridge or two may survive out there.

And finally, Satoru Iwata is said to be involved with all of these ports, especially Joust. But in 1984, Iwata was involved in Nintendo’s very Joust-like Balloon Fight. Is it possible that Balloon Fight was inspired by Nintendo and Iwata’s own work on Joust? Well, the physics are definitely different enough that it’s not a copy. But it’s interesting to think about. 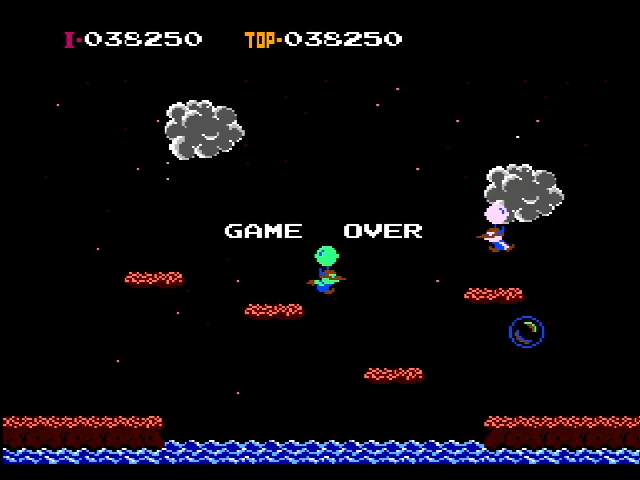