According to ancient Greek legend, there was once a man named Narcissus, who was so beautiful and so aware of his own beauty, that he fell in love with his own reflection, staring upon it so long that he turned into a flower. Well, in the 1980s, Nintendo wanted to give those of us not as gifted as Narcissus a reason to stare at a mirror for hours on end. What am I talking about? I bought a Game and Watch!

In my post on the Soviet Elektronika series of Game and Watch clones, I noted that I didn’t have any authentic Nintendo Games and Watch, other than a modern “Color Series” release. But it turns out the modern Color Series wasn’t the first. Because of that, I bought my first true Game and Watch. 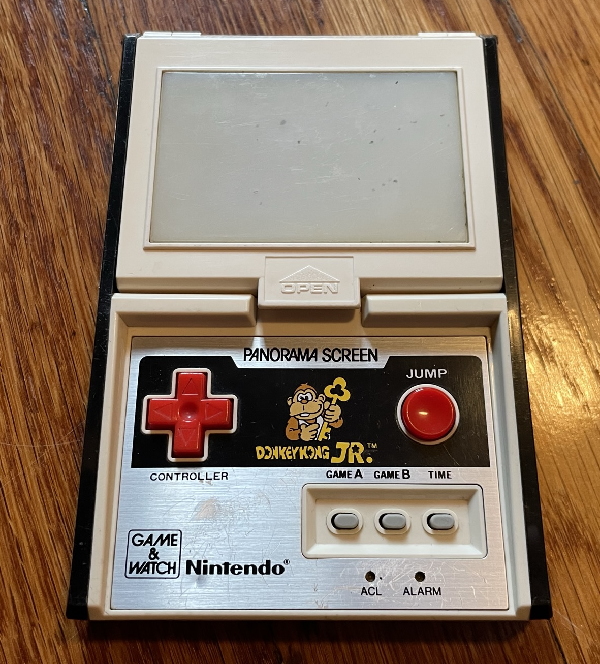 It’s a fairly odd-looking device. It seems to have buttons (including the cross-shaped D-pad Nintendo invented for the purpose) but no screen at all; just a pale white translucent piece of plastic. So how do I see this “Panorama Screen”? Open it up: 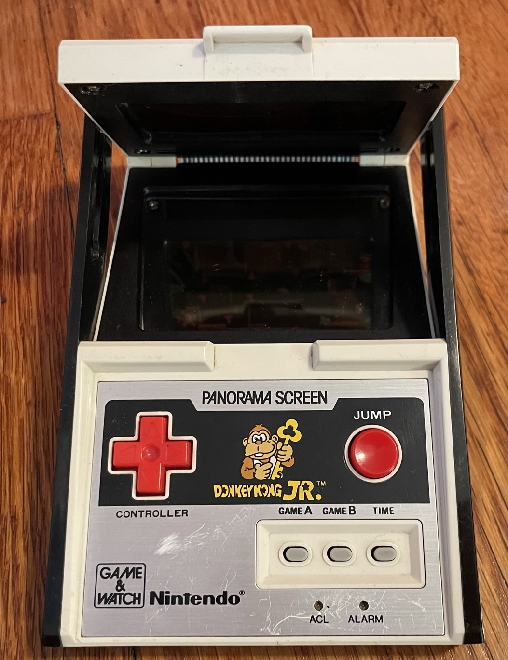 A neat thing here is that this doesn’t just open; it hinges the entire device, putting it at a nice angle for a tabletop. A tabletop, eh? Keep that in the back of your mind. 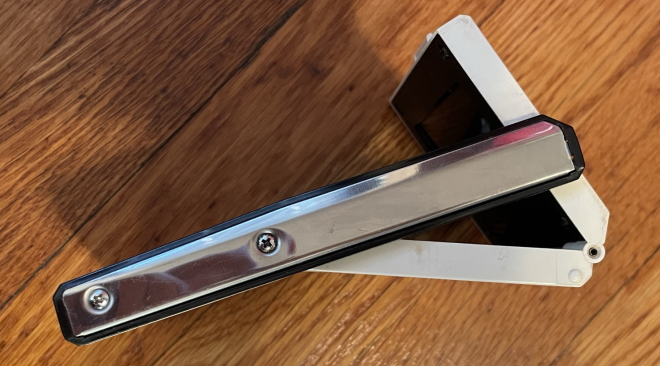 And if you peer into that little gap, the Game & Watch Panorama might blow your mind. It’s also one of the hardest things in this history of this blog to photograph, but I’ll try my best. 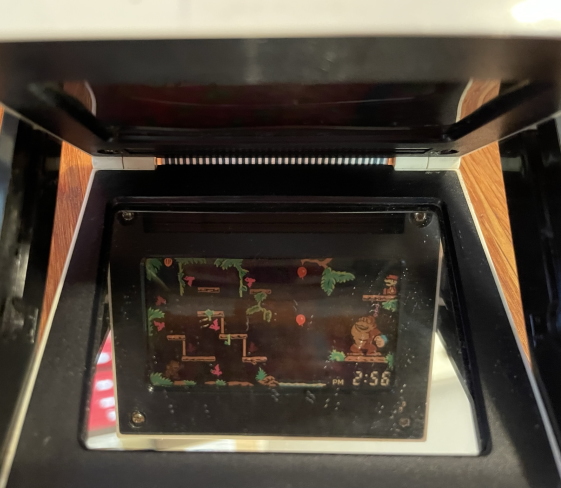 That’s right! The Game & Watch Panorama Screen is in color. This photo doesn’t do it justice; it honestly looks great. It’s very clean with detailed black lineart over the colors, not pixelated at all. But why is it like this? What’s with the mirror?

Where we’re going, we need backlights, but we won’t have them

The Game & Watch series is famous for innovating the dual-screen design that was later adopted by the Nintendo DS. But the Panorama Screen goes somewhere modern Nintendo doesn’t dare: take off the plastic chrome side pieces, and you’ll realize that you hold in your hands a three screen device. If a mirror counts as a screen. 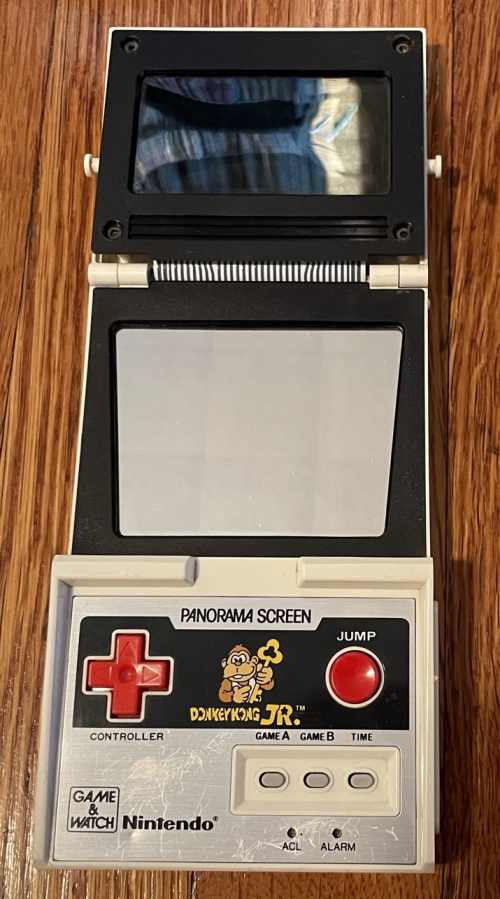 And we can find out where that color comes from by taking apart the screen at the top further. 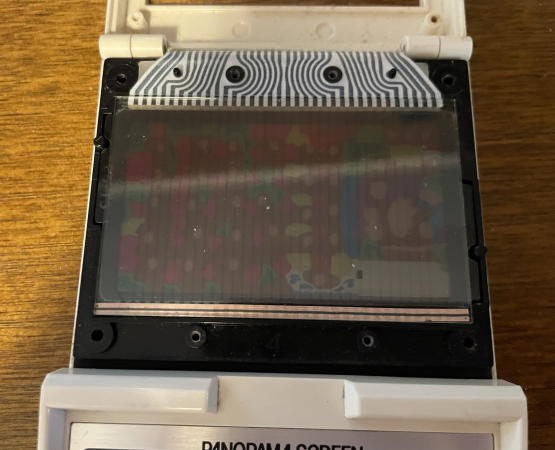 The colors come from a sheet of colored material. And just like every other Game & Watch (including Soviet ones), this relies on good-old-fashioned LCD technology. The LCD screen is set up so that instead of the lit segments being visible, the lit segments become transparent. This might seem complex, but in fact it’s just a matter of switching around the polarizer. In fact, while messing with this, I did just that. 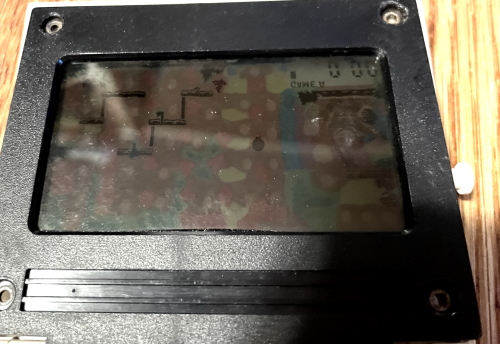 Notice that all the text is inverted; this is designed to be seen through a mirror, after all. But this gives away the trick of the Panorama Screen pretty thoroughly.

Why, then, the mirror and the translucent plastic? To allow as much light in as possible. The problem is that passing through the colored layers darkens the colors significantly; a lot of the incoming light is filtered out. A modern screen might just use a white backlight, but in the 1980’s for a kid’s toy, that would’ve been too expensive. It’s a clever solution.

There’s another reason for all of this. The Panorama series first run of games started out as Table Top games. These are the same LCD screen and the same arrangement of mirrors, but presented as a much larger game intended to sit on the table, similar to Coleco’s series. And they were definitely quite a bit more impressive than Coleco’s– Coleco agreed, and while Donkey Kong got a VFD display game, for Donkey Kong Jr., Coleco just licensed Nintendo’s table top.

The Panorama Series seems to have been more successful than the Table Top overall, though, as the series was sold longer and got some exclusive games that never had Table Top counterparts, like Donkey Kong Circus and Mario’s Bombs Away.

Time to play the game

So, what is Donkey Kong? Surprisingly, it’s a completely different game from the monochrome Game and Watch version! I don’t have the monochrome version, but I do have this adorable “Nintendo Mini Classics” version, which is the same game. 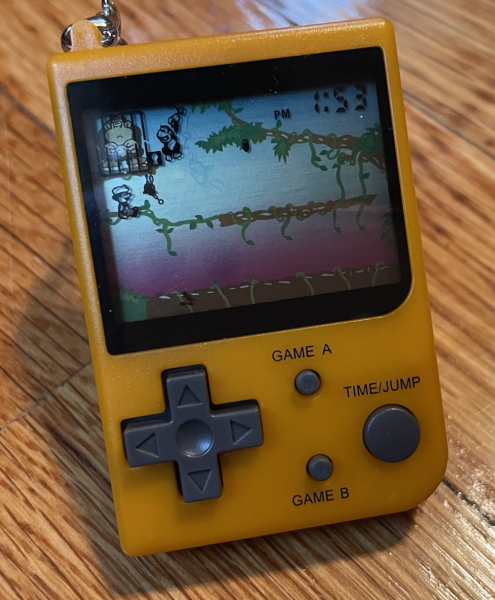 I like to think of these as echoing the four levels of the arcade game. The monochrome “New Wide Screen” is a lot like level 1, where Mario throws small claptraps while Donkey Kong Jr navigates a level through jumping and climbing on vines. 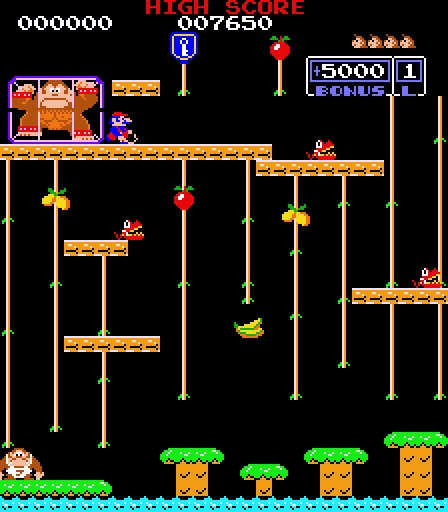 And the Panorama Game & Watch?

It’s a bit more of a stretch, but both the Panorama and level 2 of the arcade involve moving platforms that you have to time your movement between; the Panorama has its umbrella and balloon (which play music!), the arcade version, vines and platforms moving in the opposite orientation. 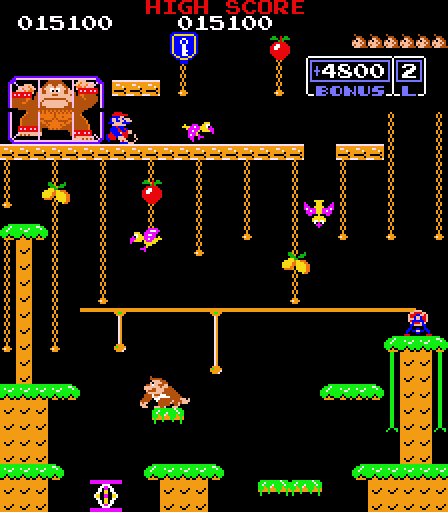 So what about the last two levels, three and four? The game groups them together as “Mario’s Hideout”, and can I just say that the decision of Shigeru Miyamoto to make Mario a villain in his second outing is just so interesting? Don’t take things like this for granted. 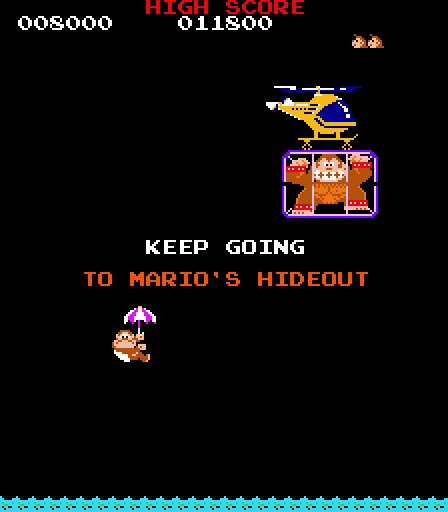 Well, having joined the two levels together in the arcade, Nintendo joined them together in the LCD realm as well. Donkey Kong II is a dual-screen Game & Watch, with its two screens starting in a level filled with sparks, and then ends with crawling between rows of vines. 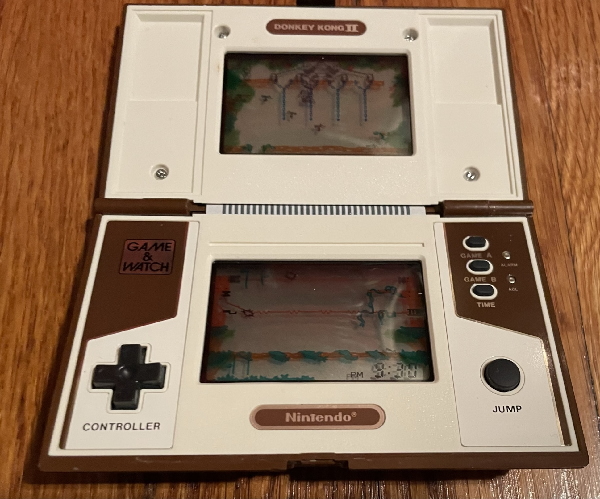 It’s more jungular than the arcade version, but the notes of the arcade’s later levels are definitely recognizable. Note that in this version, you can’t push up each key; instead, the key goes to a random lock each time until they’re all unlocked.

What I find interesting about this is that for one thing, there are consistent differences, like the Game & Watch games being more focused around collecting keys and unlocking the cage of Donkey Kong, while keys do exist in the arcade, it’s only in level 4 that they’re anything more than a fixed goal.

But also, Donkey Kong Jr. in the arcade was led by Shigeru Miyamoto, while his boss, Gunpei Yokoi, led the Nintendo R&D1 division that was responsible for Game & Watch titles. When you have the same game made by different teams, it’s neat to see what each team emphasizes. 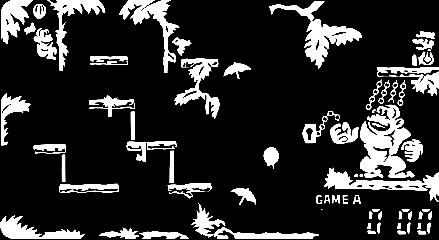 I’m missing some art files in MAME, so the Donkey Kong Jr. Panorama Screen is missing its color. It gives a very stark look to the whole thing; and really, this is all the LCD game part of the game is. Which I find very interesting; not only is the Game & Watch series a clever use of technology, it’s one wholly defined by the physical device, even moreso than an arcade game.

Surprisingly, despite the fact that the New Wide Screen version of Donkey Kong Jr. made it to multiple Game & Watch Gallery games, and even Donkey Kong II got at least one port, the Panorama Screen version of the game has never been remade since. (Interestingly, while Popeye is also different between its monochrome and Panorama adaptations, Mario’s Cement Factory is almost identical. The Game & Watch Gallery version treats the New Wide Screen as the classic mode, though) 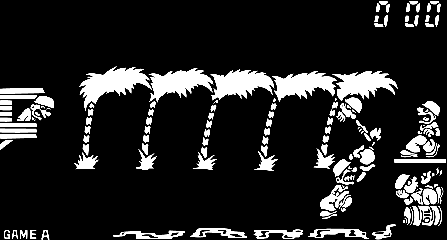 The only Panorama Screen game to make it to the Game & Watch Gallery, as far as I know, is Mario’s Bombs Away, about Mario’s service in the Vietnam War, which was an unlockable in Game & Watch Gallery 4. Overall, the Table Top/Panorama Screen are a chapter of Nintendo’s history that isn’t remembered as much as the more iconic monochrome Game & Watch games, but it’s still interesting to me. Arguably, Nintendo wouldn’t get color portables of this level of graphical detail until 2001’s Game Boy Advance! Narcissus was ahead of his time.