Recently, I looked into the MVS that wasn’t multi-video, a set of officially licensed single-game boards from SNK Playmore that plugged directly into JAMMA. But they only did that for a few games at the end of the system’s life; what if you were an arcade operator who didn’t want to shell out for the flexibility of an MVS, and only wanted to have King of Fighters ‘97? SNK wouldn’t help you, but pirates can! Let’s sail the seven seas and check this out!

As an arcade operator, an arcade machine is, in some sense, a machine that you buy, and then it prints money for you. Eventually, the game will get old and stop printing money, so the economics of this are crucial. At some point, a game will not have enough interest, and the only value the game will have is to sell it to a weirdo hobbyist. A common rule of thumb is that old games are basically worthless on location. Publishers too want to steer you to newer games, especially after a hardware transition. 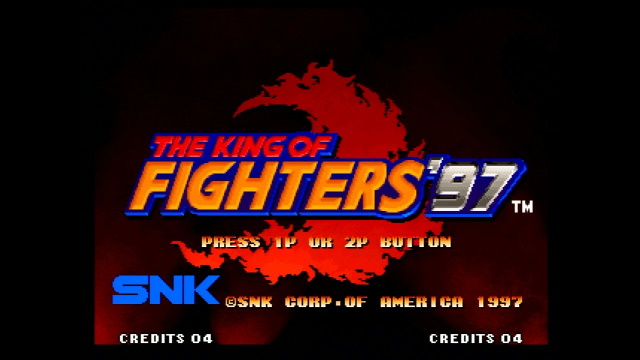 A few games, though, seem to keep lasting on. One of those is King of Fighters ‘97, the fourth entry in SNK’s team battle crossover fighter series. While in the United States, the most popular entry from the 90’s is King of Fighters ‘98, in places like China, ‘97 reigns supreme. It’s a simple trade-off; do you want more chaotic gameplay and a story, or a larger cast and more balanced gameplay but no storyline?

So imagine it is 2012. In China and other regions, King of Fighters is the most popular fighting game series generally. However, SNK Playmore has moved on to the more expensive Taito Type-X hardware, which doesn’t use the JAMMA standard. If you want to put King of Fighters ‘97, which is still popular even in 2021, on location, your only legitimate option is to find an old MVS board and cartridge copy. That’s not super expensive, but you’ve got a business and every dollar counts. Perhaps, then, you buy one of these: 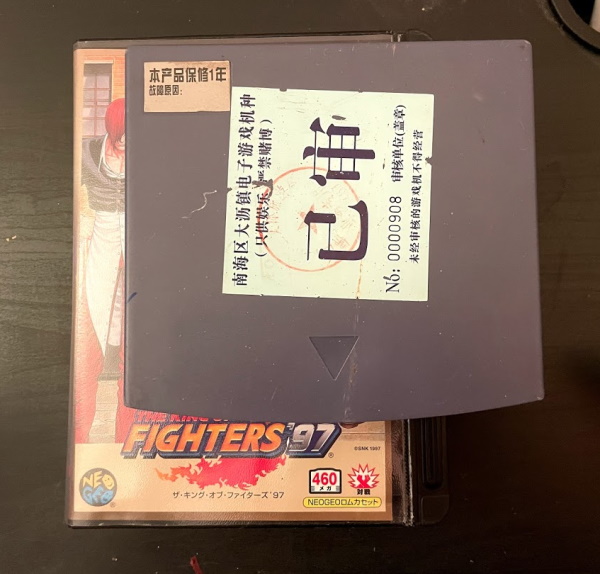 A small board the size of an MVS cartridge, with modern hardware inside, and a VGA port on the side in case you’re not pure JAMMA (or replaced the monitor in your cabinet with a cheap PC one). This solved a real need on the market; when companies like SNK refuse to meet it, pirates step in.

That’s right! The board I have is pretty old (December of 2012, if the exterior datecode is to be believed), but pirate single-game boards that just play King of Fighters ‘97 are actually pretty common, and you can get them on sites like Aliexpress today. 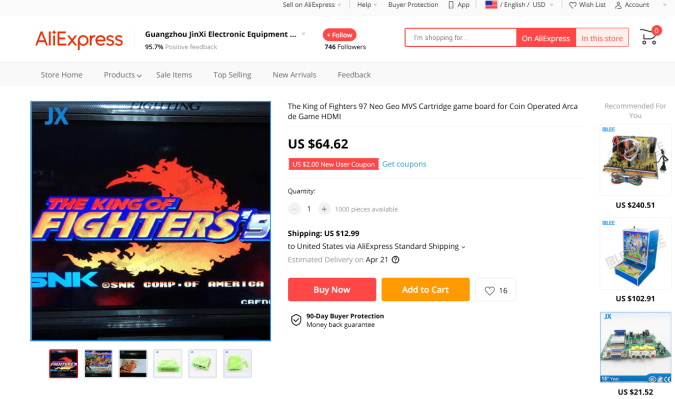 They’ve even got the world’s top chipset! 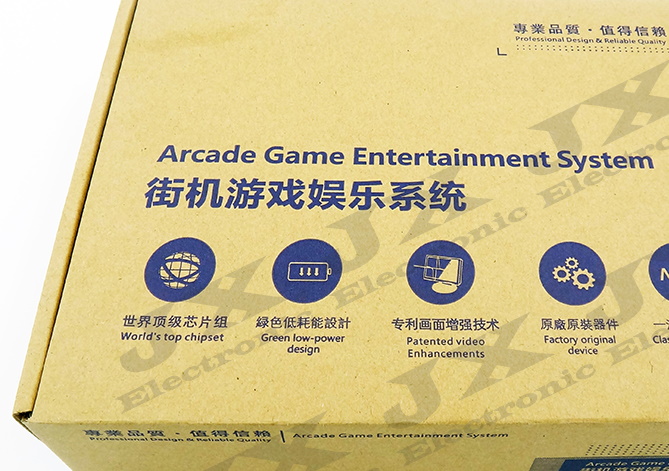 Let’s give it a try!

Enough wasting time. Let’s get this sucker running! I’ll be using the same “supergun” setup described in the Neo-Geo MV0 article. All of the screenshots are from the video over the JAMMA connector. 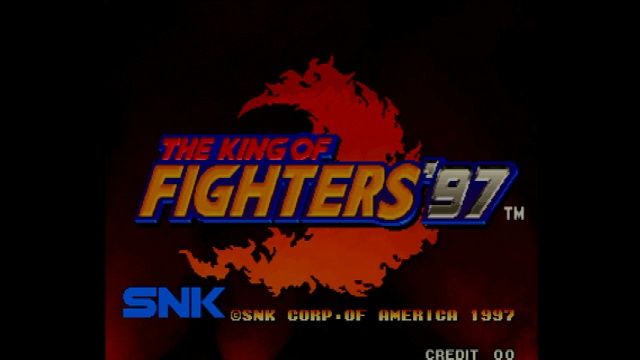 When you turn it on, you’re greeted immediately by this screen with the logo, and a notification that you have input zero credits. And if you press the coin button, the credit counter never increases. Indeed, nothing at all happens for a bit.

At this point, I was wondering if I had been got by a bizarre scam; claim you’re selling a JAMMA board of a certain game, show a screenshot of it on the title screen, but in fact all your board does is display a single image. But that’s not true– the above is just a loading screen. Eventually we get the familiar garbage of an MVS boot sequence. 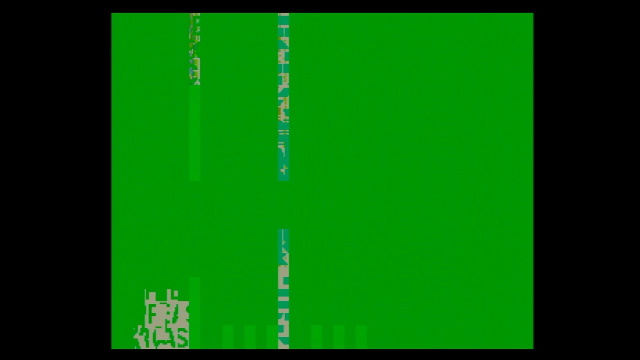 Because of the need of a separate loading, I think we can assume right away that this is running some sort of emulator, and not an “MVS-on-a-chip” or anything like that. (I’m not sure if one of those ever existed, if it did it’d be cool) The gameplay seems to run fine; even in 2012 emulating the stock Neo Geo was definitely not hard, it is a system from 1990 after all. 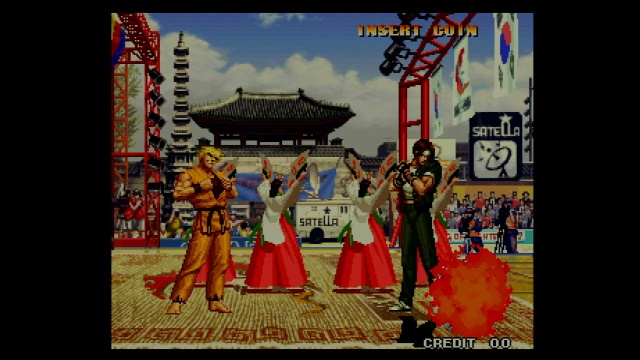 Well, I say runs it very well, but there is one exception: the sound doesn’t work. The volume is very low, and when you do amplify it, you get a loud buzz. Part of the buzz might be due to my supergun, but in general it’s not exactly usable like this. Playing a fighting game without a satisfying sound effect when hitting an enemy isn’t the same! My guess is that this is likely a dead capacitor or something on the audio circuit. There is a dial on the side that doesn’t make any difference.

Additionally, my power supply doesn’t provide -5V, which some JAMMA boards require. But in 2012, -5V wasn’t common in power supplies either, so I doubt that’s the issue. 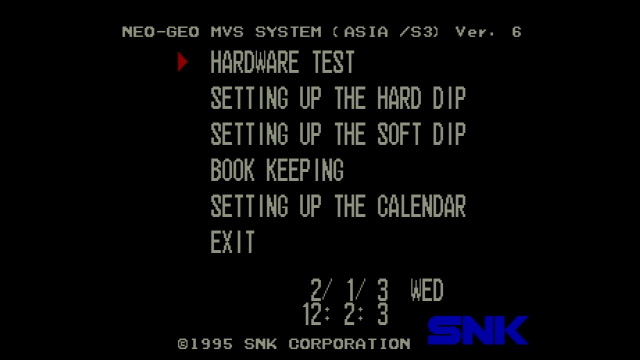 This is the classic MVS service menu; in fact, identical version to that used on the real Asia-region MVS zero-slot board we looked at. There’s not very much to say within the menu, but I did notice something interesting on exiting it.

This Chinese text is not on a stock MVS. In my messing around with the system, this is the only time I got it to display something that wasn’t the stock game or the loading screen above.

Let’s face it; the fact that pirates in 2012 could make a device that can play Neo Geo games isn’t exactly shocking. Again, it’s a console from 1990. What we’d like to see is how they did it. 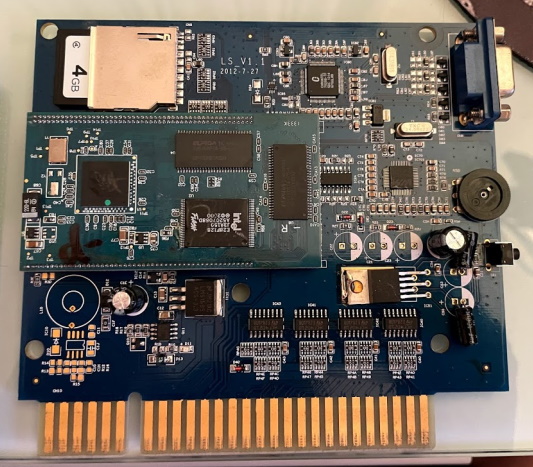 And the circuit board doesn’t disappoint! Right off the bat, we see an SD card, which is very interesting. We can also see that the -5V line isn’t connected, which is what I’d expect. Maybe one of the electrolytic capacitors is bad? There’s also a daughterboard that seems to contain the brains of the operation. Let’s label some of those chips. 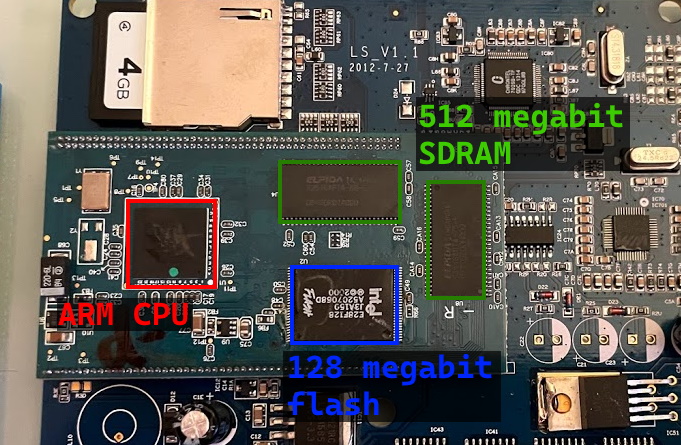 The CPU is a Marvell RTPXA270C5; this is an ARM CPU based off of the Intel XScale design, released by Intel in 2004. So this is quite an old CPU even at the time; your Raspberry Pi 4 would annihilate it. This is not really a system-on-a-chip like we’d know it now, but mostly just a CPU, though it contains some USB and serial controllers as well as built-in SD card support.

The flash chip, an Intel E28F128, appears to be 128 megabits; not sure what’s that for. It’s not even large enough to hold the 460 megabits of King of Fighters ‘97; I assume therefore that this is just for the board’s internal settings, like the software DIP switches.

The two Elpida chips, an S2516AFTA and S2516ADTA, are both 256 megabits of SDRAM. (The F and D are die revisions) 512 megabits are 64 megabytes, which is likely plenty of RAM. The old Pentium 200MHz I used in the PC-FX article had only half that, after all. Though I don’t know if that Pentium could emulate KOF’ 97 very well.

There are additional chips on the underside of the daughterboard, but with all the dense connectivity going to the mainboard I don’t trust myself to desolder it. The mainboard is dominated by passives and discrete logic, but you can also see:

Overall, I have to say there are a lot of components here; I’m half-tempted to buy the modern one to compare, I wonder if they’ve reduced the parts count; the modern version has HDMI, which definitely makes me expect a more modern system-on-chip is likely involved. Still, this board was nowhere near top-of-the-line even in 2012.

But the most interesting part is the SD card; a 4GB card definitely has enough room for a simple OS and a MAME port, especially once you consider that this only needs to play one particular Neo Geo game. So what’s on this card?

Just one game, kof97.zip. This isn’t the standard MAME ROM either, as far as I can tell. The zip file includes both the dump of the game’s ROMs as well as the ROMs you’d find in neogeo.zip in MAME.

Still, I wanted to try one game in particular in here: Neo Turf Masters. This well-regarded golf game is a good test of emulators because to have the perspective effect while you shoot it does raster effects where it modifies the sprites during the horizontal interrupt, which isn’t frequently done on the console.

But as it turns out, any attempt to modify or replace the contents of the SD card, or boot without it, was met with something even more unexpected:

This is Ranma Bomberman all over again!

First, we get the same boot screen, with King of Fighters ‘97’s title screen. That tells us that the boot screen is not hiding somehow in that zip file, which I’m not surprised to hear, though it does make you wonder.

It’s what comes after this that I wasn’t expecting: 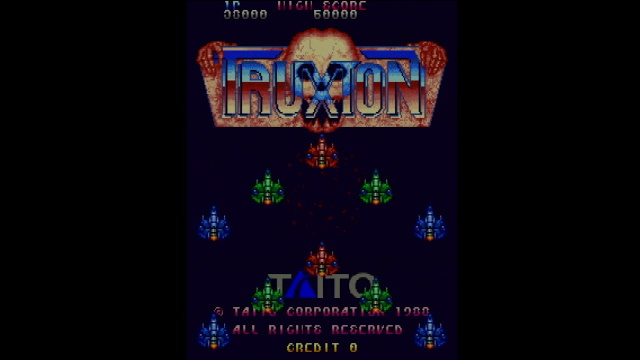 It’s Truxton by Taito! And even odder, it’s running in a rotated mode; this isn’t great at this resolution, as this is usually a “tate mode” game. And it plays perfectly fine, using all the JAMMA buttons including coin, and even supporting the service button the side. I’m tempted to leave it like this; I have several ways of playing KOF but no other device that plays the arcade version of Truxton.

This isn’t the first time we’ve found a strange bootleg on this blog, and it probably won’t be the last. This one is definitely mysterious though.

Somewhere, probably on the bottom of the daughterboard, must be some kind of ROM or larger flash that contains the OS, the copy of Truxton, and the emulators. So in theory, the SD card would allow making a ton of these boards and swapping out the games. But the firmware is also game-specific, since the boot-up screen shows King of Fighters ‘97; so why is the game ROM on an SD card at all? One possibility is that this was to allow various hacked versions to be swapped out, but I’m not really sure.

One thing that is for sure is that I don’t recommend this as the best way of playing King of Fighters ‘97; if you’re going to use an emulated version, you should just get it from Steam. If you’re running an arcade, there’s little difference between this and a JAMMA adapter for a Raspberry Pi– well, except that the Raspberry Pi has much better hardware. But hey, you do what you have to. 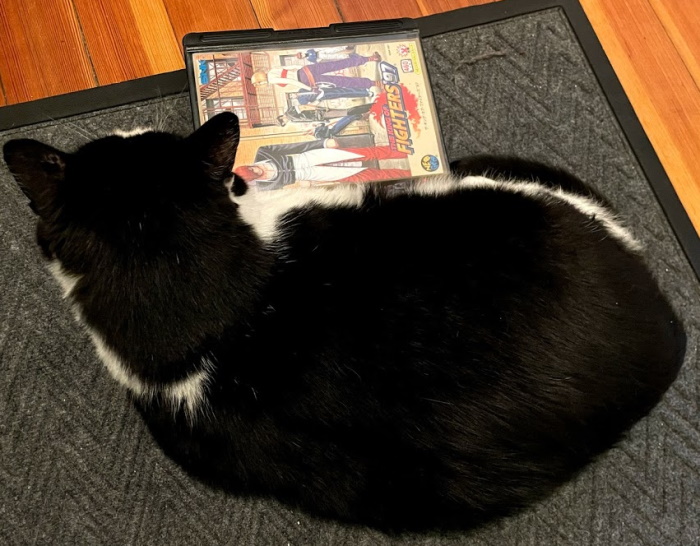