For some reason, I felt like I should explain a little bit about what the Atari 8-bits were, but I don’t feel like I need to explain this machine. The Apple II series (calling it the ‘Apple 2’ just seems wrong), though feels like it needs no introduction. This particular machine is an Apple ][ plus, the 1979 update. This makes it about as old as the original Atari 8-bit; while the 130XE was a product of the latter half of the 80’s, this thing is a true throwback.

And what a machine it is! 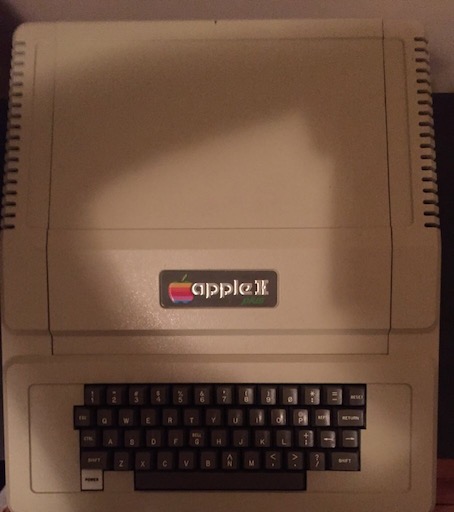 Compared to yesterday’s XE, the Apple ][ plus is a beast. It’s huge; the product of FCC regulations regarding permissible RF levels, the power supply being inside the case, and most of all, Steve Wozniak’s desire for an expandable machine. No interior shots right now, but that lid comes right off (no screws or latches at all! Apple has changed so much), and this machine came with a Microsoft RAM expansion and a floppy controller card.

A floppy card, you say? 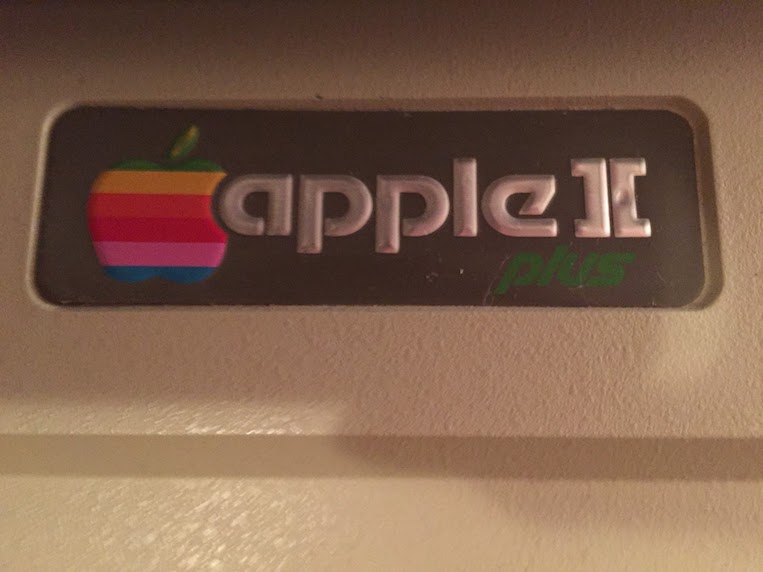 It’s a whole setup! Forget not having a cable to connect the floppy, this includes the cable, the floppy, and even a green-screen Monitor ///. And it all works! The floppy drive is a much later Apple 5.25” Drive, not the classic Disk II, but hey, newer hardware has its benefits too. (And look how small it is!) 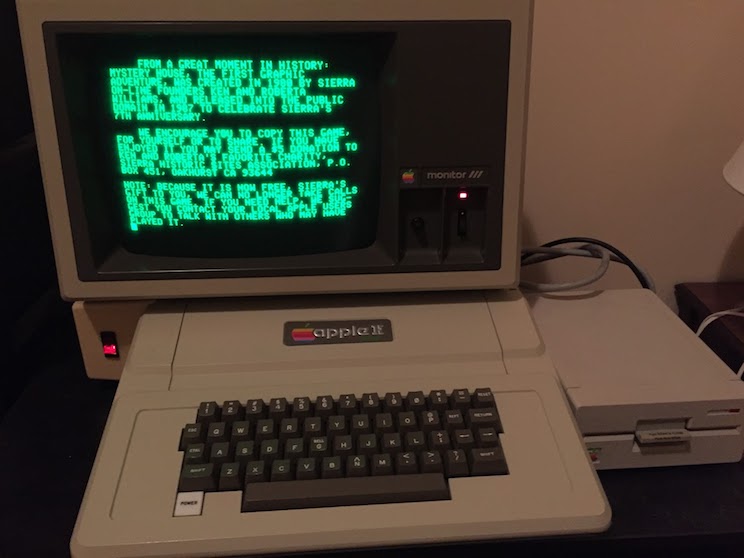 Don’t quote me, but my understanding is the Apple ][ plus dates from the era of Apple using painted metal cases (those pesky FCC regulations), that would be replaced with color-impregnated plastic during the era of the Apple //e. It definitely gives it a very different feel, and for me, a lot of nostalgia for the computers in my elementary school.

UPDATE: I hope you didn’t quote me; it’s painted plastic, not painted metal. Apple actually avoided the FCC regulations of the time by not including an RF modulator, or even manufacturing one; they left that to third-parties, who did need to get FCC approval but only for their add-on boxes. 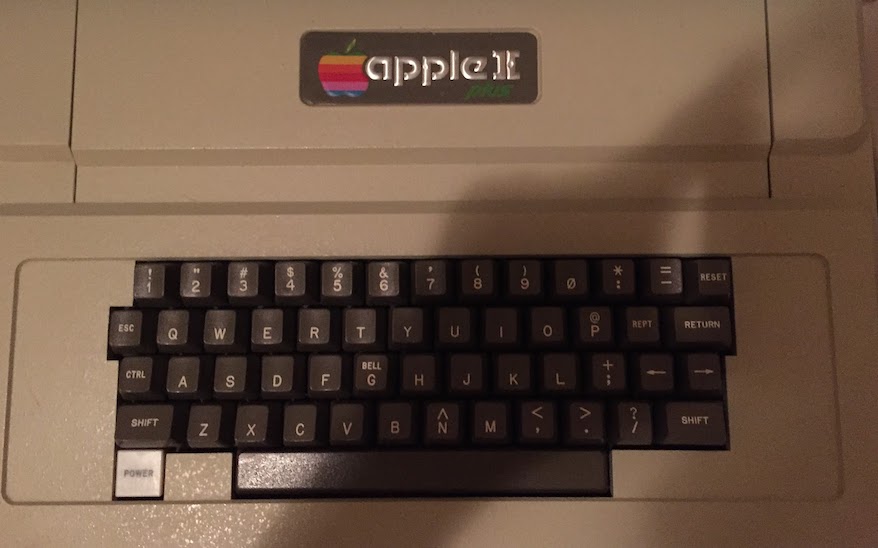 The keyboard works well for the most part, the S key is a little finicky, but it works. Probably the hardest thing to get used to is the lack of a proper backspace key; instead, the practice is to use those arrow keys to go back and overwrite your text. Makes sense, but not how a modern text input works, so it’s a bit surprising. (Notice that this is a difference from the Atari too, which has no arrows at all and a more usual delete key)

That’s right! This particular lot on eBay came with a Monitor ///, the CRT (of course) monitor Apple designed for their ill-fated Apple /// machine. (I’m in no hurry to buy one of those) It really scratches that retro itch with its crisp, perfect lines. It’s really the ideal machine to play Mystery House on; makes On-Line Systems’ lineart look almost like a vector monitor. 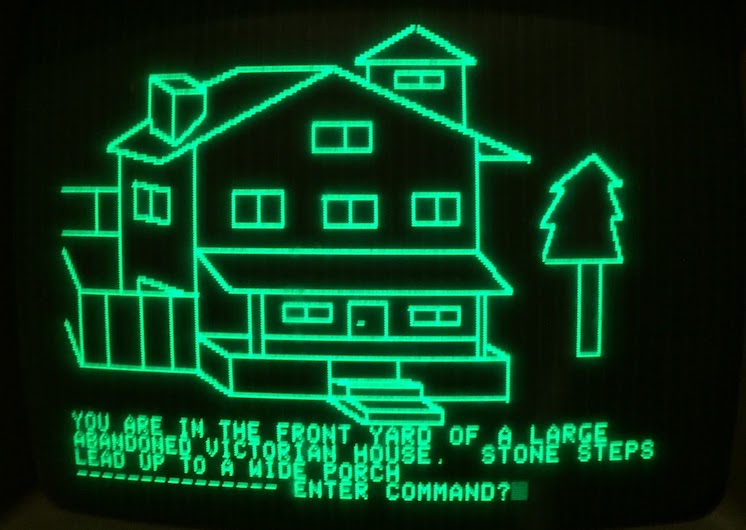 But it’s a really weird choice for this machine. The Monitor /// was popular with Apple II users mostly for its business applications, and its support of 80-column text mode. All the included disks I got with this were games, and the ][ plus has no inbuilt 80-column mode, and didn’t come with a card for it either. So, it’s cool, but I have to ask why?

This was a really nice lot I won, with a bunch of games on disk. So for now I’m pretty happy with it. I’ll probably pick up a controller of some sort, as the lack of arrow keys is a pain (and even if it had //e-style arrow keys, who wants to play a game with those?), and look into using the audio line in to pipe in some cassette games.

In the longer term, though, I think I’m going to sell the Monitor ///. It’s cool, and really provides a feel that a modern screen is going to struggle to do, but it’s heavy, and I’m not using it to its full potential. I’d like to play some games in color, and plugging an Atari into a monochrome screen just feels like a sin. For my purposes, it’s just not a good fit. I’ll probably pick up a cheaper color screen that I can share across my older hardware.

But hey, for now I can bask in the green glow, and get completely stuck in Mystery House gods damn it Roberta Williams why would you do this to me