The whole world has moved to solid-state media; my laptop, a 2017 Apple MacBook, has an SSD, no fan, and runs perfectly silent in nearly all cases. With floppy drive emulators, the benefits of solid state and modern media types can be brought to older machines as well; but sometimes that silence can be a bit unnerving. So what can we do about that?

There are two main reasons. The first is of course, nostalgia, that “classic feel”. For example, the Disk ][ and its successors on the Apple boots up with an alarming burst of clacks due to it not having a sensor to determine the head position; the Floppy Emu, an otherwise great replacement for those drives, just flashes a little LED.

There is a practical reason, though. Old machines can be slow; floppy emulators don’t speed them up, either; they need to convince the hardware they’re interacting with that they’re just a floppy drive, and give the expected timings. So having some sound while you look at the screen can be reassuring.

And because I want to, damnit!

The Gotek and the Piezo

On my Commodore CDTV, an Amiga 500 set-top box, I’ve attached a Gotek-branded floppy emulator running the FlashFloppy firmware. This allows you to attach a USB thumbstick (I choose a very low-profile one) filled with disk images, and switch between them on the fly. It’s very nice, and a definite recommendation. (Though maybe not a recommendation on the CDTV, which is kind of a strange beast)

FlashFloppy actually takes support for aural feedback into account, providing a signal on the Gotek’s header pins that can be taken by a simple piezo speaker. All you have to do is attach one of those speakers (which can be had very cheaply from eBay) onto a two-pin header, and there you go.

This sounds nothing like a floppy disk drive pic.twitter.com/VvIP6HuywI

Ignore the fact that my drive is in pieces at the time, I hadn’t put everything together yet. As you can hear, though, this provides good audible feedback, though at the cost of not sounding quite like a floppy drive, Still, it’s certainly better than nothing, and passes the time while waiting for Workbench to boot.

Onto the Apple, and a twist

I contacted Big Mess O’ Wires, who makes the aforementioned Floppy Emu, about whether it would be safe to attach a similar speaker to the Disk ][’s stepper motor lines. He said it likely would be, but that I might want to consider attaching a relay instead.

This was an interesting idea; the sound of a piezo just isn’t close, but a relay, a small magnetically controlled switch, would be much closer. Much clickier for sure. A downside, though, is that a relay can’t just run off the line directly; it needs a transistor to allow the output to control a more powerful signal, usually 12V, that itself powers the relay. (The relay, meanwhile, can use that 8V to switch something at line voltage) 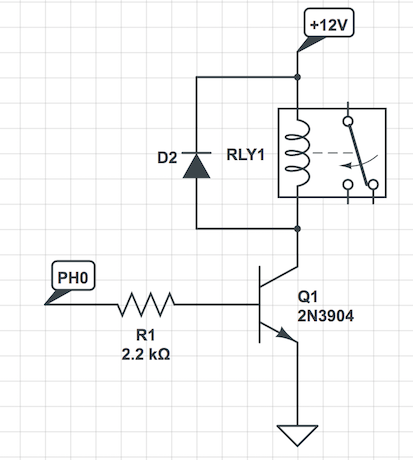 Relays, transistors, and the like are easily obtainable. I used a Panasonic JW1FSN-DC12V, but it doesn’t really matter. Similarly, any 2N2222 (what a delightful part number) will do for the transistor. BMOW recommended I check out this guide, which was pretty helpful, but this isn’t too complicated by any means. Remember that the resistor you want will depend on the specific parts you choose, don’t just blindly copy my diagram.

Did you build it? 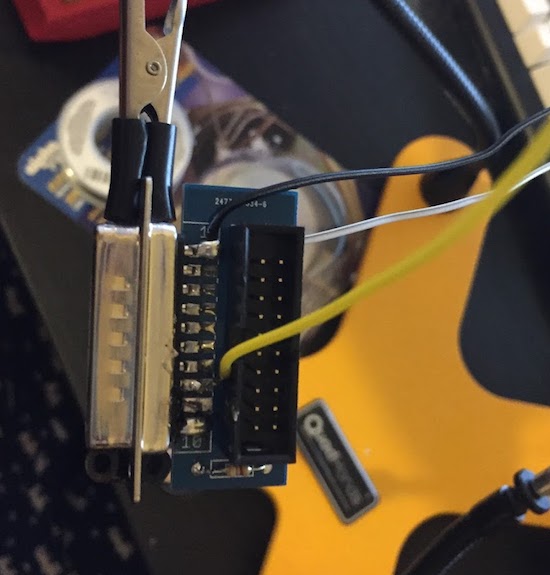 Yep. You can see above the hardest part of this for me, which was attaching some extra wires to steal some signals from the disk connector. (I’m well out of practice at soldering) I used PH0 pretty arbitrarily, I think any phase signal of the stepper motor will work just fine. The Apple2 wiki has a useful pinout here; all the signals, including 12V, are here. 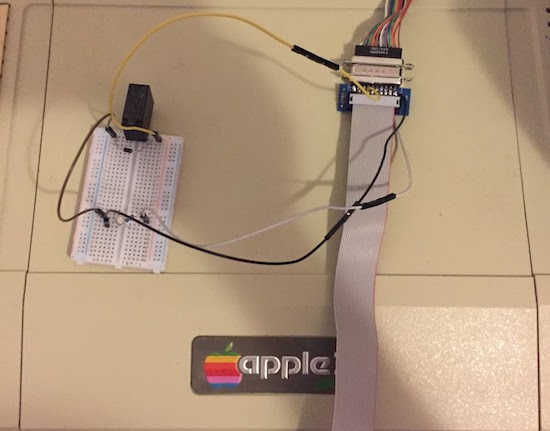 And there it is! It’s a very, very simple circuit, after all. But you don’t just want to see it, you want to hear it as well– and therefore we shall turn to my favorite video hosting service, Twitter.

I’d say that’s a big improvement over the piezo, and definitely over silence!

For now, I’ve just placed the little breadboard inside the Apple’s case (there’s plenty of room). But eventually, I’d like to solder it onto a more permanent board, and probably give it its own cute little box.

I also wanted to try to attach a similar relay to the Gotek drive, but the cable I use to attach the Gotek to my CDTV doesn’t actually pass the 12V signal; in fact, its connection doesn’t even have metal there. This makes some sense as the Gotek only needs 5V, but it means that this approach won’t work, or I’ll need to build a new cable. 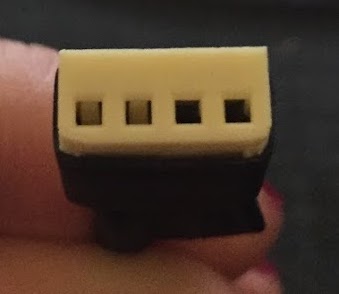 For now, though, I’m very happy with how this turned out; it wasn’t too difficult and I like it a lot more than silence.