Here in my home country, the United States, the postal service often has problems with the huge volumes of mail and packages at the end of the year holiday season; this year, things are even worse than usual thanks to, well, everything that has made 2020… unique. So a few titles I wanted to cover in the first Neo Geo CDZ article just didn’t arrive in time. Initially I was just going to not cover them in an article, but hey, let’s pad out the article count for a year/start off with an easy one! (Editor’s note: choose which ever fits when you publish this) 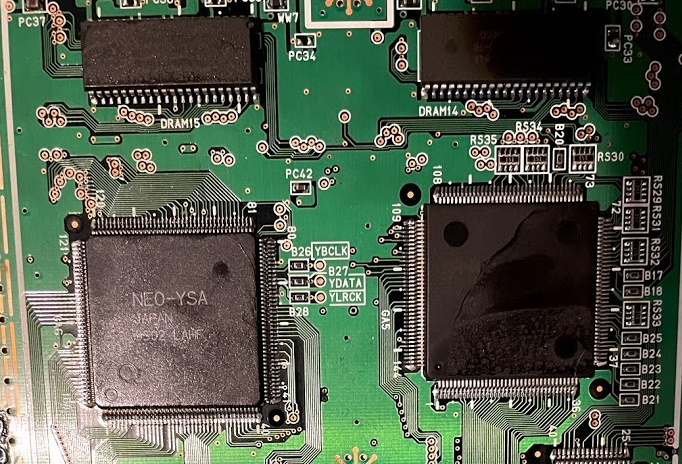 The Neo Geo’s unique audio capabilities are provided by the Yamaha YM2610 synthesizer. On later systems, including the Neo Geo CDZ we covered last time, the YM2610 core is integrated into a combined chip called NEO-YSA, but that doesn’t really matter. The capabilities are the same. It’ll be useful to know these when we dig into the differences, as audio RAM becomes a limiting factor.

The datasheet here is a bit strange, but not complicated. The YM2610 features the following capabilities:

We’ll focus on those sample channels, because that’s where the Neo Geo CD really struggles compared to the base system. You might be tempted to compare the ADPCM-A channels to the Commodore Amiga’s 4-channel Paula PCM sampler, or the later Super Nintendo’s SPC700, which has 8 channels of ADPCM samples. But there are some interesting differences in the nature of those samples.

When the Neo Geo was released, early games like Magician Lord tended to use the console’s internal FM and SSG synthesized channels for music, while the ADPCM-A channels were used to provide simultaneous sound effects. (Notice that in Space Ava 201, sound effects cut out when another sound effect starts, because the TurboGrafx-CD only has one channel that can play them) This is why early Neo Geo games can sound like Genesis games. ADPCM-B was more often used for speech, so that it could be stored at a lower bitrate.

Over time, though, this changed. The “V” ROMs in which samples were stored got larger and larger; King of Fighters 2000, the first King of Fighters game to not be released on the Neo Geo CD, contains a maddening 16MB of V ROM. With such a large amount of space, not being able to change pitch isn’t a big problem. Bankswitching is used to use the same ROMs for ADPCM-A and ADPCM-B; the cartridge pinout expects separate ROMs. If you leave ADPCM-B at 18.5 kHz, it’s essentially a seventh ADPCM-A channel.

What about the Neo Geo CD?

The Neo Geo CD was released in 1994, at the beginning of this transition in Neo Geo audio. As noted in the prior article, it has 1MB of DRAM used for ADPCM-A samples, and 0MB– literally nothing– attached to the ADPCM-B address bus. So it can’t do ADPCM-B, and only has 1MB of space for ADPCM-A. This is pretty low, and can’t even handle many launch titles. But that didn’t matter, because the Neo Geo CD had an obvious trick up its sleeve: a CD-ROM drive, and CD-DA digital audio. CD audio doesn’t need to be loaded into RAM (though of course it can’t play while the CD-ROM drive is being used for data), plays back at a whopping 44kHz, and isn’t synthesized at all. It just is. 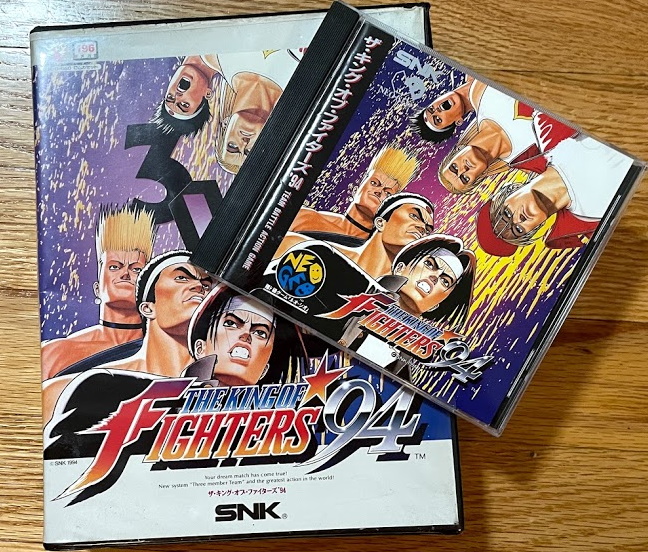 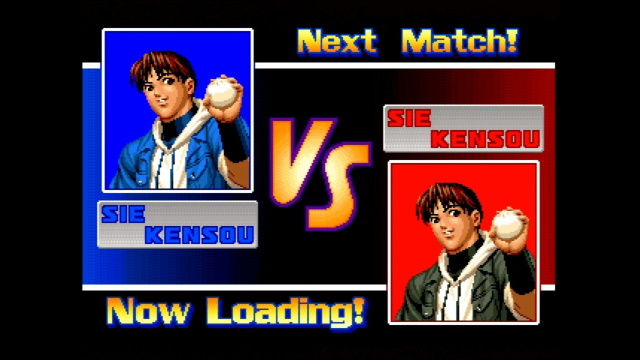 Let’s look at how some other games handled the issues raised by the Neo Geo CD. 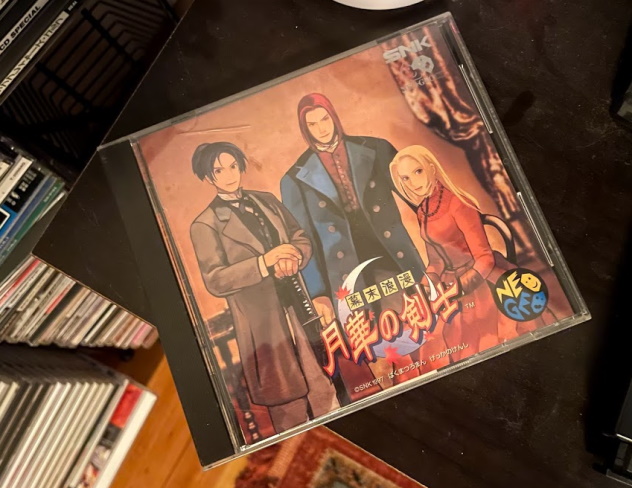 The Last Blade is the last blade, commemorating that sword manufacturing stopped and no new blades exist. It’s a weapons-based fighting game, sometimes called a spiritual successor to Samurai Shodown, though Samurai Shodown still gets new titles whereas there hasn’t been a new Last Blade since 1998. Still, it’s a lot of fun, and has a very strong aesthetic, set at the end of the Tokugawa Shogunate. 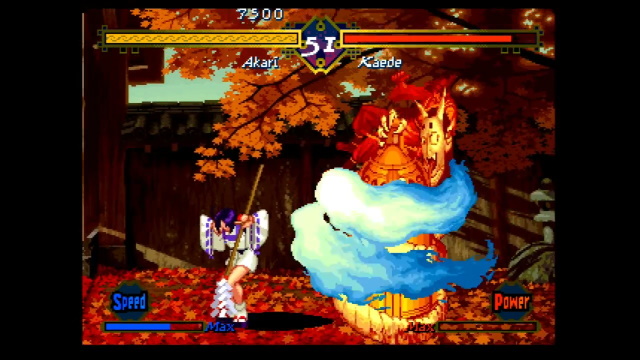 When given the task of converting a game like this from a 474 megabit ROM cartridge to a CD-based format, there are a lot of ways you could go about doing it. It’s important to remember, though, that the Neo Geo CD was a niche console for a niche audience, who wanted the exact arcade experience. So, let’s see how this game goes, starting at the title screen. 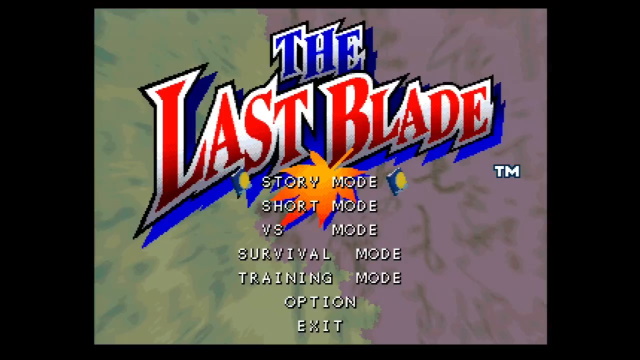 Like King of Fighters ‘94 and many other Neo Geo CD ports, the attract mode is replaced with a menu to provide a more home game experience, and a shorter initial load. Choose story mode, therefore, and there’s another load. 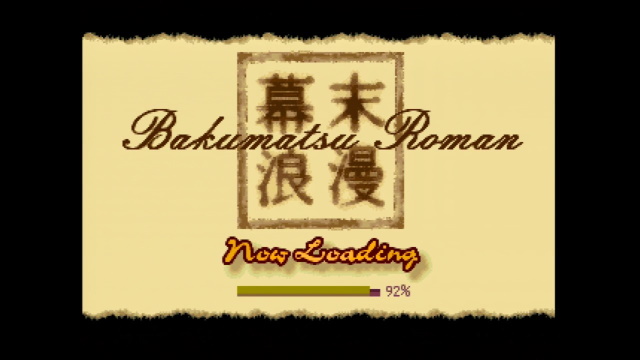 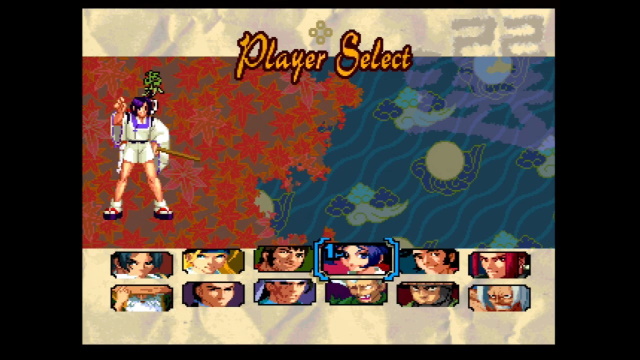 Select your character, and also you can choose a sword fighting style. I generally use the fast mode. 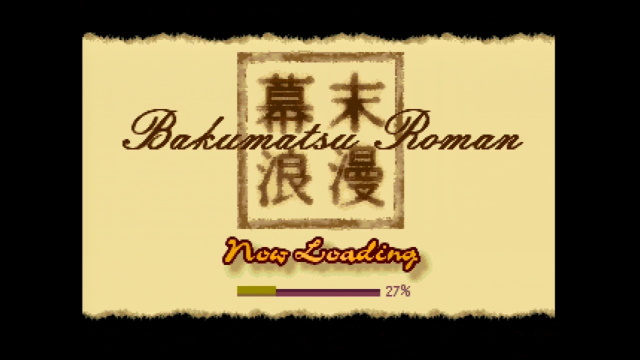 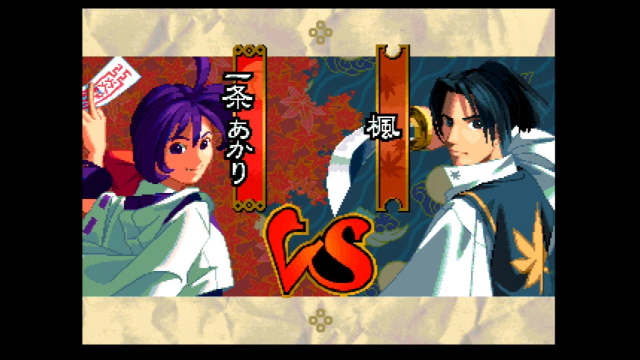 We get to see the characters who are fighting! This lasts only five seconds as it reads the names, thus taking less time than it took to load. 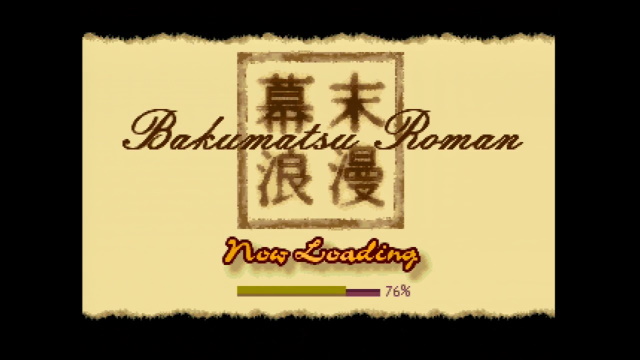 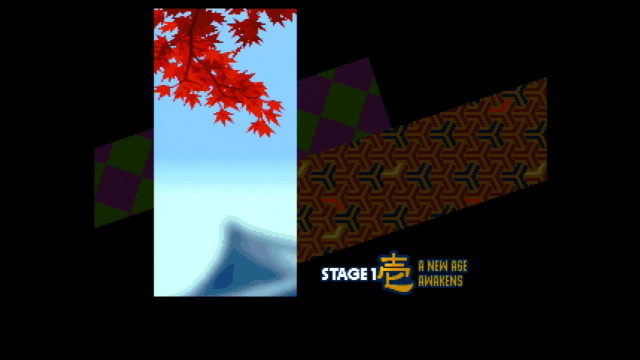 Because we’re in story mode, we get this nice stage intro as well. It’s pretty neat; the Japanese style house has a Gaussian blur out which is a pretty nice pre-rendered effect, and maple leaves fall. It lasts about as long as it took to load, though, before we hit… 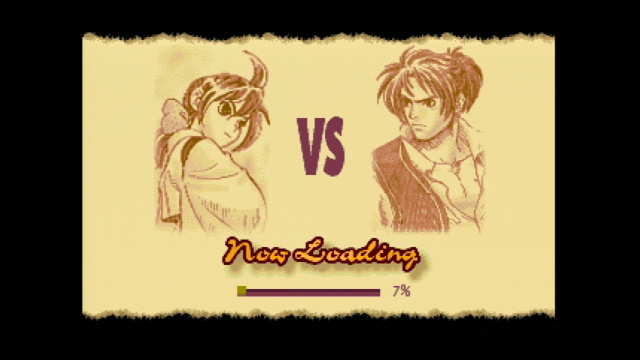 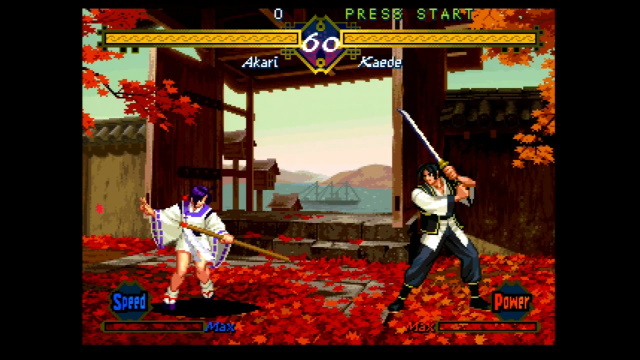 The characters face each other and taunt! The fight is on! 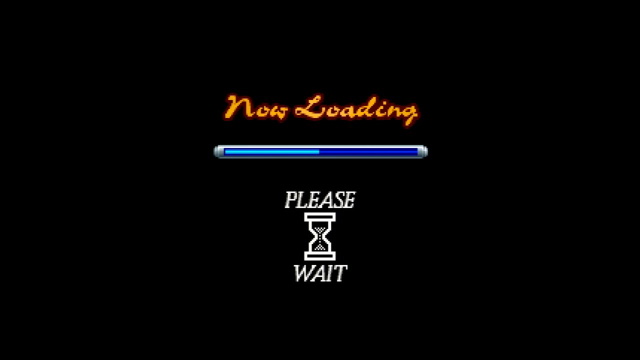 Well, just one more pre-battle load. My guess is there isn’t enough audio RAM for the fighting sound effects and the pre-battle taunts, but this is pretty painful; you just saw the battle screen! This is the last one before the battle, though!

Even SNK knew this was a bit ridiculous; The Last Blade features a “Demo Cut” option which removes most of the pre-battle scenes entirely. They really contribute a lot to the aesthetic of the game, though, so it’s a shame. (Basically necessary if you don’t have a CDZ, though) Looking online, the contemporaneous PlayStation port does have a lot of loading as well. By the late 1990s, Neo Geo games were taking more and more advantage of the possibility of giant ROMs. But remember, the Neo Geo CD version does have an exclusive CD-quality soundtrack. 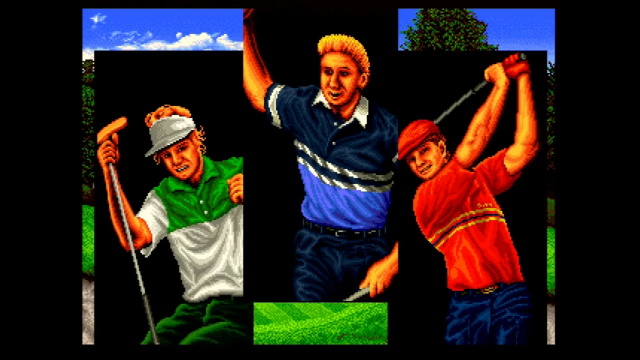 Top Player’s Golf was a Neo Geo launch title. It was reasonably well-received at the time, though given that it’s the only golf game by SNK on the console, it’s easy to dismiss it as just a title SNK released to give MVS multi-slot machine owners more variability. But it’s actually a pretty fun arcade golf game, with fast gameplay and a lot of voiced dialogue. It’s also a lot cheaper than the other golf game on the Neo Geo, Nazca’s excellent Neo Turf Masters. 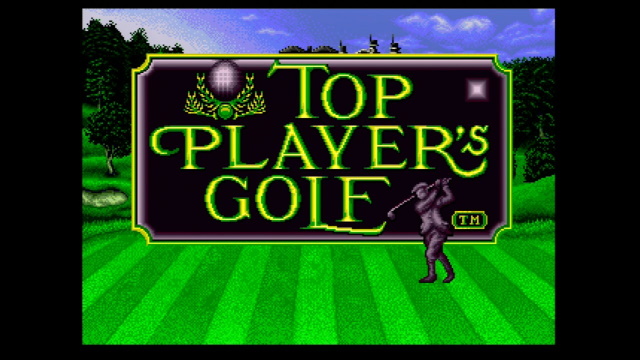 So, why is it here? Well, for one thing, Top Player’s Golf is the first game on the Neo Geo CD to feature an arranged soundtrack, which is to say, the music is different from the cartridge (home or arcade) version, mixed with actual instruments (or maybe just higher-quality synths) in CD quality. It’s quite good, with a nice calm pleasant tone that wouldn’t fit, say, King of Fighters, but is well-suited to golf.

But how about that digitized voice? Before each hole, your caddie can tell you about the course. Having this much dialogue in a game was pretty impressive for the time. Let’s listen in to how it sounds on the Neo Geo MVS cartridge system; unfortunately, my AES is out of commission right now, so this video is recorded from MAME; I hope you’ll forgive me.

Now, let’s compare that to the same segment on the Neo Geo CD. This is recorded from real hardware and the audio is a bit lower than the above one; I tried to amplify it but apparently not enough.

Why did they change the audio quality? Look at the description of the ADPCM-A and -B above; to get a lower bitrate, the cartridge version uses ADPCM-B for the caddie’s speech. You can actually check this yourself; with a legitimate copy of Top Player’s Golf, if you dump the ROMs to the MAME naming scheme, the files with “v2” in the extension are the ADPCM-B ROMs. They contain, among other things, the caddie’s dialogue. I’m not quite sure what the frequency is, but it seems to be around 12kHz.

However, ADPCM-B doesn’t exist on the Neo Geo CD, only the 18.5kHz ADPCM-A. Top Player’s Golf therefore may be one of the few ports for any system where hardware limitations resulted in needing to use better quality assets. This also necessitates a quick load halfway through an eighteen-hole game. Overall, you can tell SNK put some real love and effort in the conversion of this game; clearly, someone on staff was a fan.

So, we’ve looked at some games where the Neo Geo CD resulted in changes being needed; additional loading, or changed sound effect assets. So let’s cut the poor CD system a break, and take a look at what happens if you go the other way. 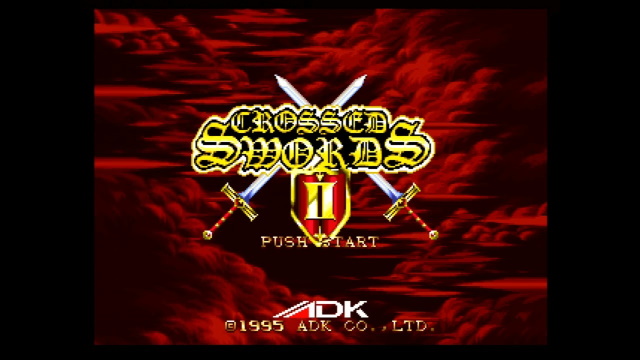 Crossed Swords II, released in 1995, is the sequel to ADK’s 1991 game Crossed Swords. It’s an interesting action RPG which plays a bit like a swords-and-sorcery version of Punch-Out!. The Neo Geo CD port of the first game is nothing to write about, being very similar to Magician Lord in having CD recordings of the game music for audio, and a large initial load. Crossed Swords II is a bit more interesting, since it not only greatly improves on the gameplay (making it feel like less of an unfair quarter-muncher) and adds additional characters, but also is a Neo Geo CD exclusive. 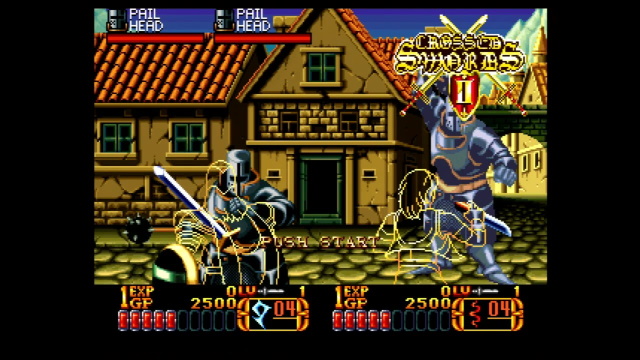 I’m not sure why this game was only released on the CD system, and if any plans were made to release it elsewhere that fell through, possibly because arcade operators in 1995 only wanted fighting games. It’s also interesting that the game was released only in Japan, but has a full English soundtrack should your console be in an English-speaking region. (This isn’t true of all Japan-exclusive Neo Geo games)

In 2015, that all changed when Neo Geo community member Razoola in association with Neobitz released an unofficial conversion of the game to MVS. The work that went into this is really impressive; Razoola even fixed many bugs in the game. You can see a preview that he released in 2014 here:

An interesting thing here is that the audio is entirely the audio of the first game, Crossed Swords. This is a bit of a shame; Crossed Swords did not exactly have the best audio, and the arranged soundtrack of Crossed Swords II is far better. However, it’s an inevitability of using the same cartridge boards as Crossed Swords did; obviously you can’t play CD audio from the YM2610, and even if you converted it all to long ADPCM-B samples, the board wouldn’t have enough ROM space. 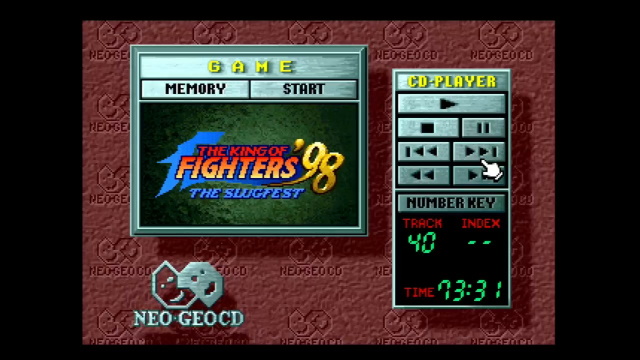 This is probably it for the Neo Geo CD on this blog. It’s a really interesting system, and with the arranged soundtracks, I’m actually glad to have some games in this format. Top Player’s Golf, for example, I would argue is better on the Neo Geo CD than the original thanks to the new soundtrack, even with the tiny amount of added loading.

It’s interesting that in some sense, the Neo Geo CD was, despite being most decidedly a home system only, the future of arcade machines. RAM was more expensive than ROM, but as computers got faster, ROMs that could keep up got more and more expensive, whereas RAM has benefitted massively from the economy of scale. Arcade machines like the 1998 Sega NAOMI had some games come on GD-ROMs that were entirely loaded into RAM. This made the experience just like that of an early Neo Geo CD game like Magician Lord; of course, the long boot-up load happens when the operator first turns on the machine in the morning.

Now if you’ll excuse me, I need to go beat a furry cat in a round of The Last Blade. Let’s hope he doesn’t fall asleep during the loading. 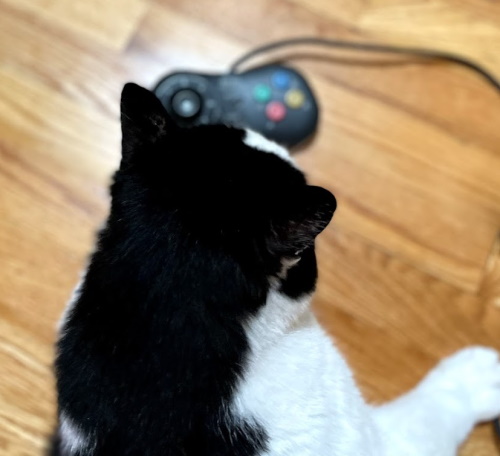