Though you might not know it from my blog, I’m told by very reliable sources that there are countries outside of North America and Japan! In some of these countries, they encode their analog video in a different way, at a different frame rate. But what if you want to bring 8-bit computers across the video encoding border? I’ll talk about my experiences and give some techniques I’ve used!

We have to address the pedantic concerns. See, common online shorthand for “the European (outside France) video standard” is PAL, and “the North American and Japanese video standard” (which are slightly different) is NTSC. But technically there are two major issues here that can cause issues, and only one is PAL and NTSC related. I’m only going to briefly touch on this because it can get complicated fast.

This has some interesting consequences! A black and white TV, or, say, an Apple Monitor ///, has a composite video input, but it knows nothing about PAL or NTSC; those are only for color encoding. Still, the differing signal timing can still cause issues. 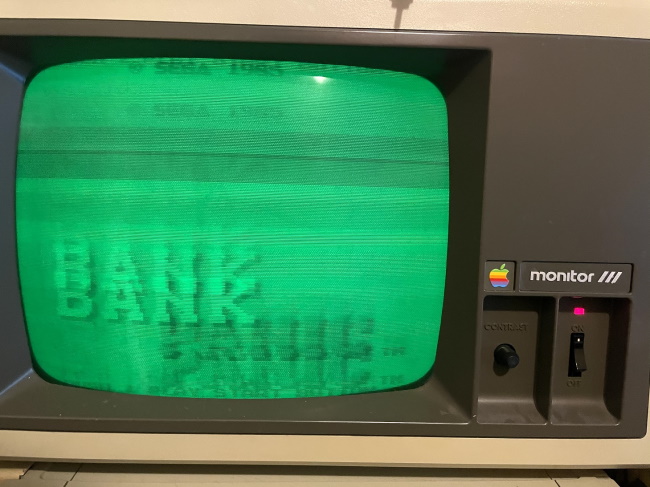 Additionally, in Brazil, a standard known as PAL-M was used, which uses PAL color encoding on top of 60Hz video timing. In theory, you could have an NTSC signal with 50Hz video timing, but in practice I don’t know of anyone actually doing that. PAL is generally seen as superior to NTSC; regions that adopted NTSC either did it because they adopted color TV first, or because they bought equipment from countries that did.

Also, SECAM, a standard used in France and the former Soviet Union, exists. It’s interesting and encodes color in a different way than PAL or NTSC, but I’m not going to talk about it here. Except to let you know that the SECAM Atari 2600 was a thing that existed. (I need to get one of those…)

Our first contestant has already made its appearance on this blog two years ago. It is a Sega SC-3000, sold to me with the claim that it was NTSC; alas, as a model sold in 50Hz Thailand, it is PAL through and through.

The Sega SC-3000 is a home computer designed by Sega which uses the Z80 CPU and the TMS9928A soundchip; a Sega SG-1000 with a keyboard, its hardware is comparable to the MSX1 computers and the ColecoVision game console. In this case, there is basically no reason to want a PAL or European machine, except that the black color scheme looks awesome. Most commercial software was designed in Japan, though the PAL version did see some market success in Australia and New Zealand. 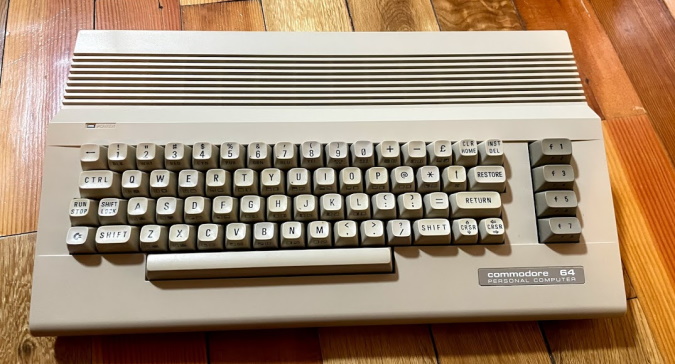 And our second contestant is a machine that, surprisingly, has not shown up on this blog before. The 8-bit heavyweight, the undisputed world sales champion of its day, Jack Tramiel’s baby, the Commodore 64. It carries a 1 MHz 6510 CPU, the VIC-II graphics chip with 16 colors and hardware sprites, and the famous SID sound chip. Since this is a PAL machine, its CPU is actually clocked at just under 1MHz; ouch! Good thing the 6510, a modified 6502, is so efficient. Perhaps we should run the Nicole Simulator on it some time.

You might wonder why I’m calling this machine PAL, when it uses a white keyboard with doubleshot keys and front-facing legends, which seems to be more common on NTSC Commodore 64Cs. Well, for one thing, I have access to the video output. And also, just look underneath: 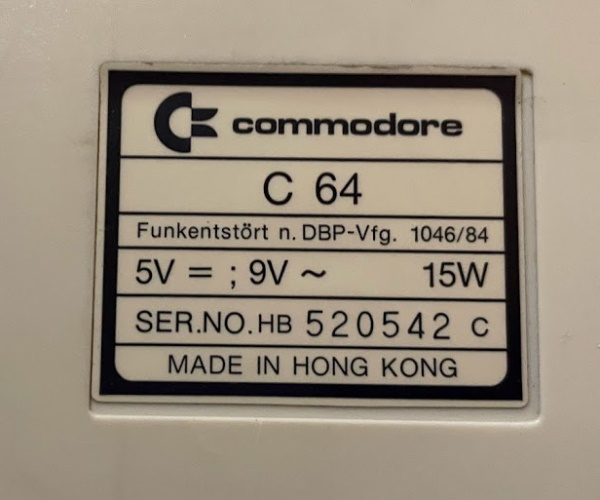 No German-speaking countries use the NTSC television standard or 60Hz power rates, so that’s a sign right there.

Now, like the Sega above, this is a machine designed for and initially released in NTSC regions. So since I have an NTSC Commodore 128, what do I need this for? Well, unlike the Sega, the Commodore 64 was a huge success in PAL regions, especially Europe. European developers realized– and still realize– that thanks to the 50Hz speed, you have more time between frames to update your code. European games and demos take full advantage of this, and many can’t run on NTSC hardware. 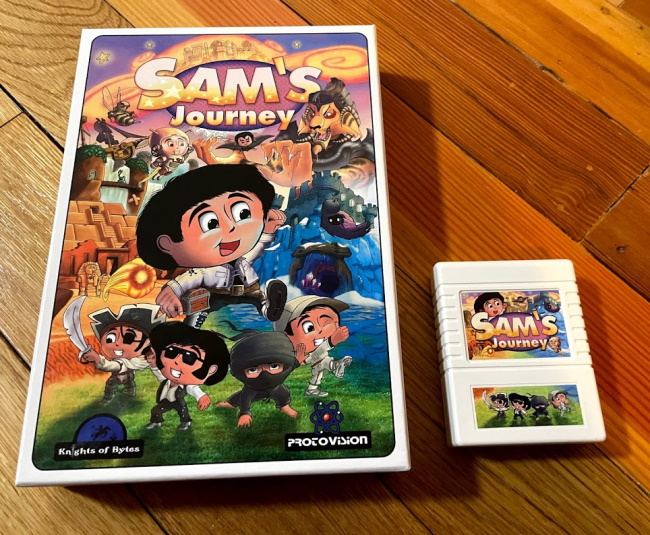 One example is Sam’s Journey, a modern homebrew game from ProtoVision. It’s amazing, and comes on a cartridge if you have a PAL machine. Certainly, they do have an NTSC release, but it requires a disk drive and extra hardware (a relatively rare Commodore RAM expander) to make up for the faster frame rate leaving less processing time.

One more thing. You might have noticed above that I mentioned that 50Hz video had a higher vertical resolution. That’s true. However, that doesn’t mean software can use it. Let’s look at Sam’s Journey’s title screen on both my NTSC Commodore 128, and my PAL Commodore 64. (While the cartridge doesn’t get to the game proper on NTSC, it does get to the title screen) 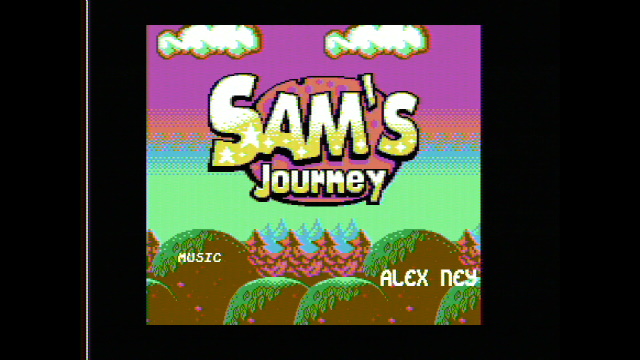 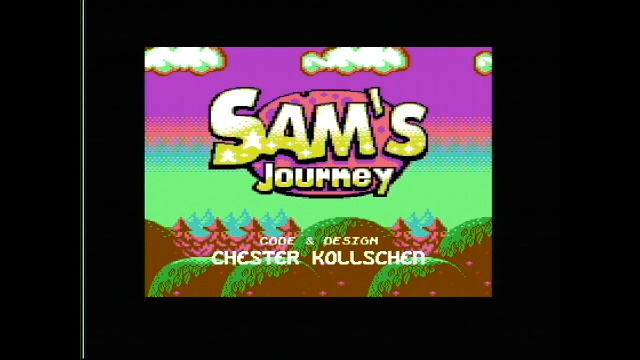 Since most software wasn’t designed to take this into account, things can look stretched when played on a region whose region they weren’t designed for.

Looking at the video

Powering these machines is easy; both can use the same power supplies as their 120V counterparts, though I’m not sure if the Commodore 64’s CIA real-time clock is impacted by the different frequency. Audio is also easy; both machines offer standard audio line-out (they’re both mono), and that doesn’t differ between regions. No need for RF here. It’s video that’s the problem. 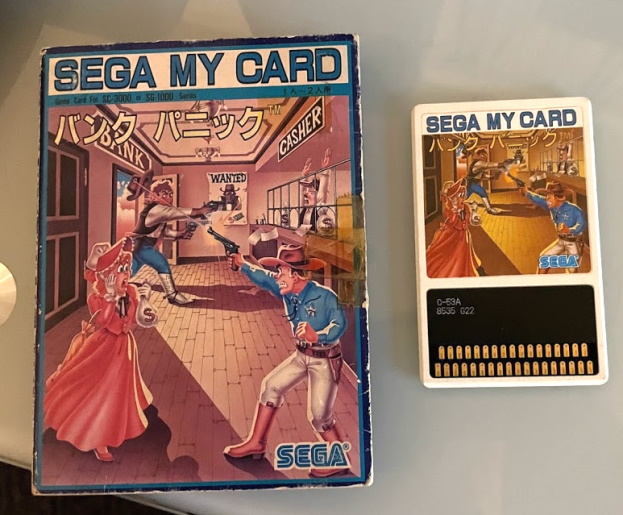 For testing, I’ll use the SC-3000, and the game Bank Panic. This is mostly because I have a few power supplies that can power it, but only one that can power the C64, so this one is easier to move from room to room. Bank Panic starts the game even if you don’t press any buttons, so it’s easy to get a gameplay screenshot.

You might remember that in the distant past, I used to capture most screenshots by taking a picture of the TV. Welcome back to that era! This is a Panasonic TV-VCR I got for free a few years ago. It’s definitely been well-used, but it still puts out a pretty decent picture; it’s also the best color CRT I own. It’s the only one. 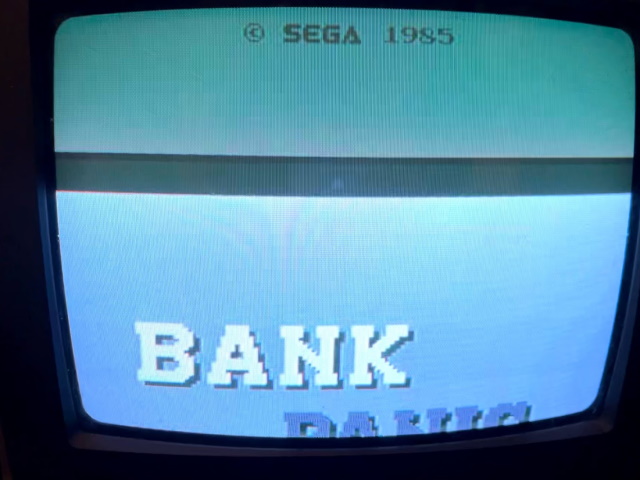 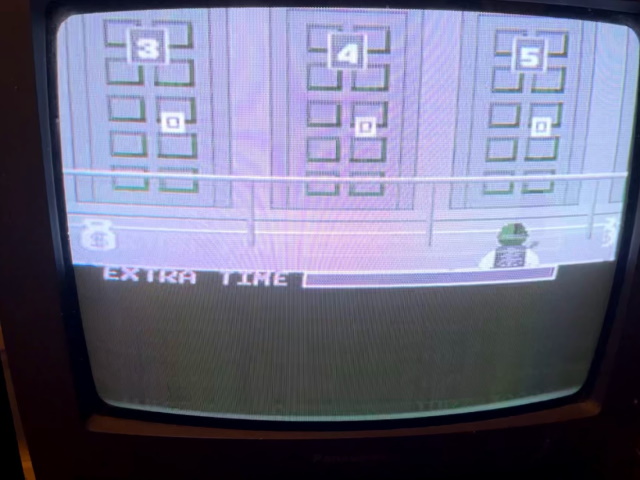 What you don’t see from these still shots is that the screen is constantly rolling; it’s expecting a 60Hz signal (or 59.97), and while they are designed to be able to lock onto slightly-off signals, they can’t synchronize with a 50Hz one. Similarly, the circuitry inside can’t decode a PAL color carrier, so there’s no color.

One benefit of this setup, though, is that the graphics aren’t squished. They’re actually the full size they’d be if this was running 480 lines. That’s because each line is being displayed as a line; of course, since there’s too many lines in a field, that gives us the scrolling effect.

This is a 1080p Westinghouse flatscreen I purchased back in 2015 or so. It’s worked quite well for me, accepting many of the strange line-doubled signals the Open Source Scan Converter can output, for example. And many flatscreens, in order to simplify manufacturing of international models, apparently can decode both NTSC and PAL. 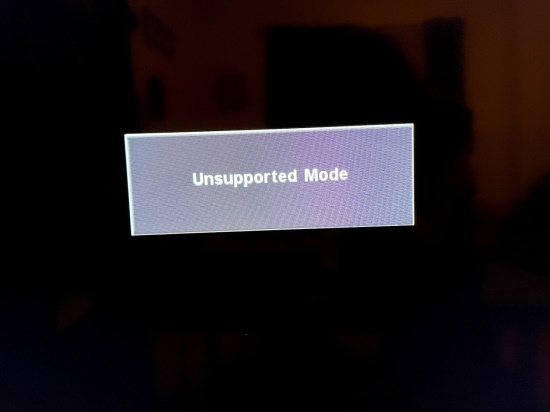 But my flatscreen isn’t one of them. 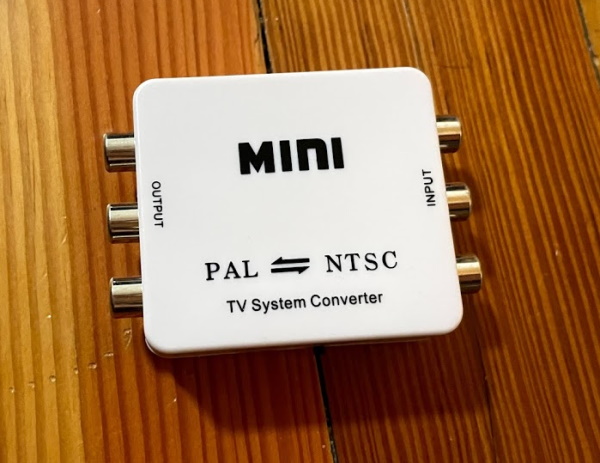 These little boxes were what I first turned to. They have three inputs, and three outputs; I’m not sure what the audio outputs do. Perhaps they adjust for the lag of conversion. These are cheap and ubiquitous, and will work even on a CRT, but they do have just one flaw when going from PAL to NTSC… 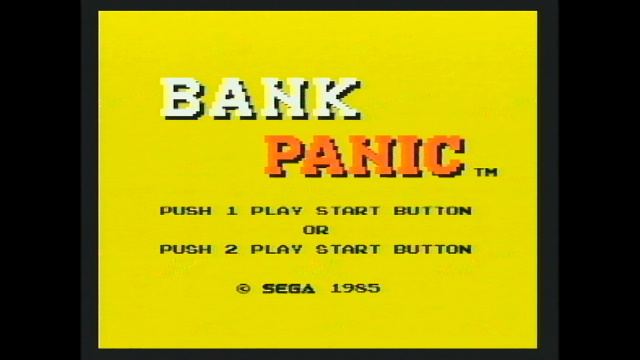 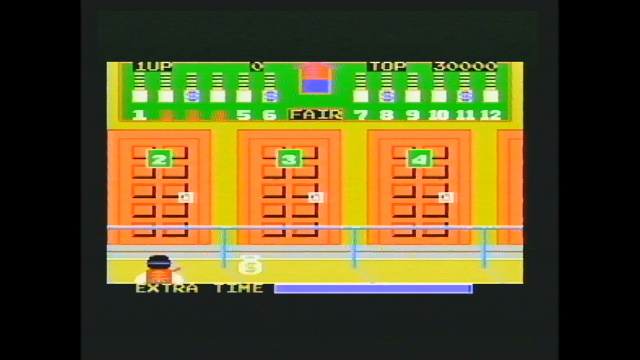 Do you see it? Perhaps a zoomed in version will help. This is captured by my Framemeister going into an Elgato capture card.

The NTSC artifacts hide it, but look closely at the thinnest lines; the central bar of the “P” or the “S” in “PUSH”. These letters are distorted and blurred; my guess is that this is outputting an interlaced signal, and probably detecting the input 240p as interlaced. (These cheap boxes pretty much always do) Even worse, because we’re converting from 576-line PAL to 480-line NTSC, we end up losing detail.

Still, while this is definitely adding lag and definitely less than ideal, these boxes are cheap and easy to get. If you want to use PAL composite video on an NTSC composite CRT, there really aren’t many other options.

A cheap Composite to HDMI upscaler

Above I mentioned that many flatscreen TV’s will be able to convert both NTSC and PAL to HD, even if mine can’t. Those chips in commodity TV’s are also repackaged in China to create cheap HD upscaler boxes. 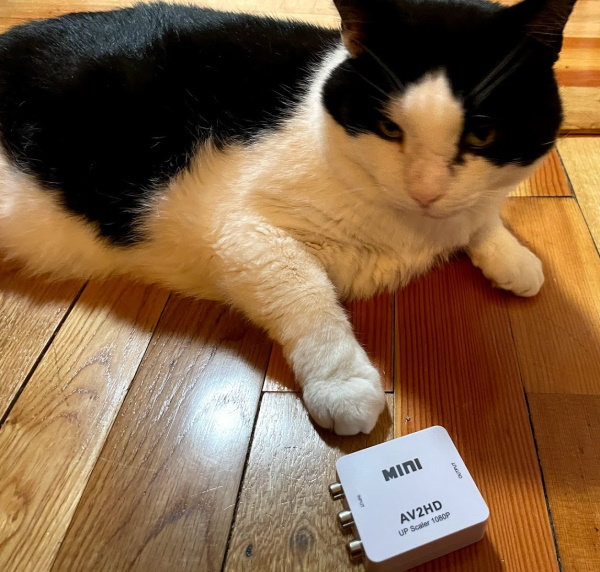 These boxes have the benefit of giving you an HD signal, which most modern TVs can take right-away. The downside is that they’re just as bad at upscaling as many TV’s, with 240p interpreted as 480i, 4:3 interpreted as 16:9, and more lag than many people like. They do, however, upscale PAL. These are captured using the same Elgato with a direct output. 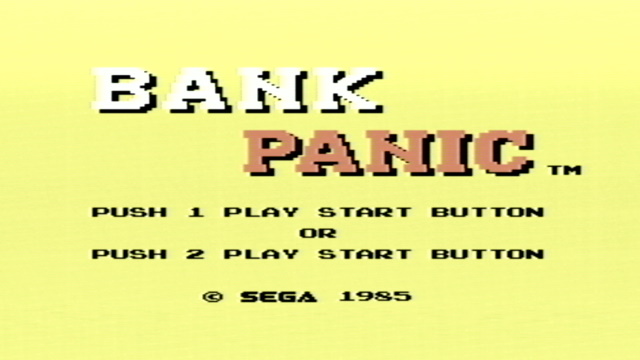 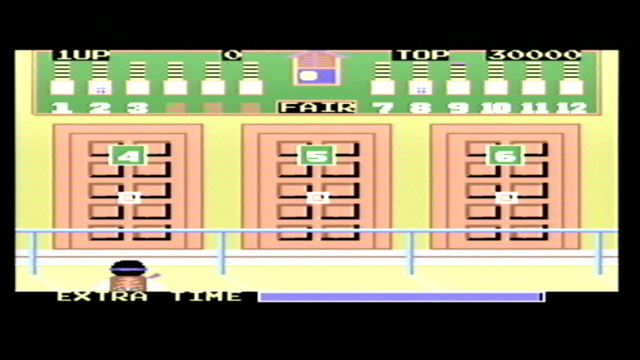 The colors are a bit more faded here; I’m not sure which is more accurate. If your TV has a correction that can fix the overly wide aspect ratio, though, this might be good enough for people who want the cheapest option and an HDMI. The signal also plays well with capture cards, which is nice. 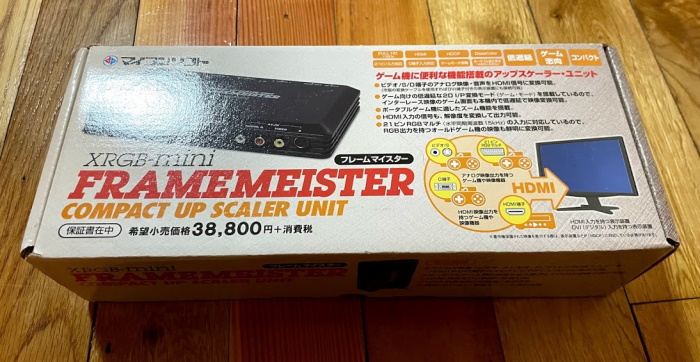 The Micomsoft XRGB-Mini “Framemeister” Compact Up Scaler Unit is what I use these days. At one time this was the darling of the retro game community due to its fast upscaling (adding only one or two frames of lag) and good handling of RGB video. However, the Open-Source Scan Converter (OSSC), a linedoubler, is more popular these days. This is both because it has less lag, and also because the Framemeister is discontinued.

The OSSC won’t work for our purposes, though, because it’s a linedoubler. What that means is that it doesn’t actually change the timing of the signal; that’s what allows it to be so fast. A 50Hz signal that comes in will come out 50Hz on the other side. The Framemeister, meanwhile, buffers each frame; this is why it has the small amount of lag it does, but it outputs a high-quality signal that nearly anything can recognize. Personally, I’m not sensitive to the lag difference.

Also unlike the OSSC, the Framemeister can accept a composite signal directly. So let’s see how it handles PAL. 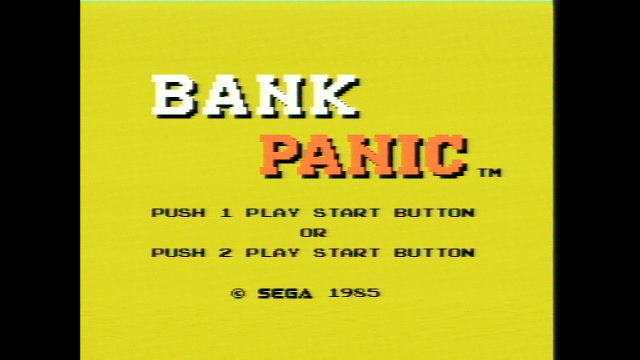 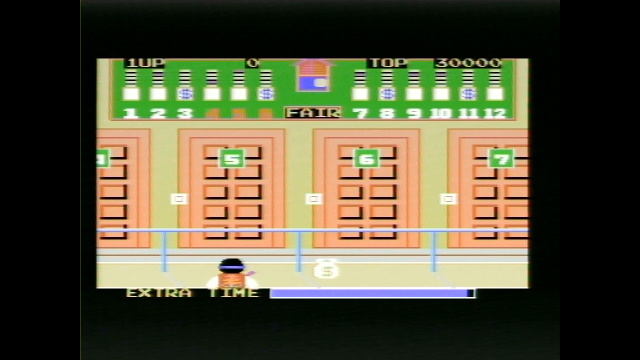 So this is a decent signal and probably the best of the lot; remember that this is still a composite signal. The Framemeister seems to be particularly bad at composite as well; I always see a lot of noise on it. The stock SC-3000 can’t output anything else, though it seems like RGB should be possible, at least on the PAL model; maybe something to look into.

The Framemeister does have another trick up its sleeve though, which is that it can also do S-Video, the best quality video the Commodore 64 can output. None of the other methods mentioned can, unless your HD TV has an S-Video input. Good luck; composite is still occasionally present but S-Video seems long gone. What’s nice is that it can also do S-Video with PAL timings; S-Video uses an encoded chroma signal, so it is still NTSC and PAL specific. 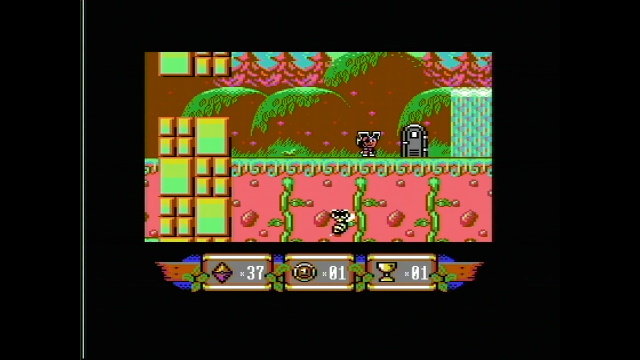 All of the Sam’s Journey screenshots were taken using S-Video.

I’m not sure if I’ll be adding more PAL systems to my setup any time soon. There are definitely a lot of interesting machines over in Europe; Acorn’s BBC Micro comes to mind as one I’d get if I saw it for the right price.

As noted, for now I’ll use the Framemeister for this. However, its composite input leaves something to be desired; I’m curious if other people have figured out better ways of handling this conversion. Perhaps going back in time to convince Europe and America to use the same power frequency?