SNK’s Athena is a game that’s lingered in the background of this blog. As we saw, her game board requires -5V to create audio, so when I first got the game, I had no sound. But we solved that issue, and so I should be happy to play Athena forevermore. It turns out I missed something. It also turns out my Athena board may have a more complex past than I thought. In Athena, nobody can hear you scream. Not without a YM3526, anyway.

Nobody corrects my errors

At the end of my blog post on the -5V charge pump, I posted the following video, showing off the working game audio:

The music is definitely there, but there are no sound effects! So what’s the deal?

Athena’s soundtrack is generated by the YM3526 “OPL” synthesizer. This is a 9-channel, 2-operator FM synthesis device that was the predecessor to the famous YM3812 “OPL2” used in the Soundblaster– that one added additional waveforms that could be modulated, but on the original OPL, it’s pure sine waves, the way the FM synthesis gods intended.

Let’s take a look at another photo from the old blog post. The point of this photo was to show off the three Z80s, but there’s an open socket in the bottom right… labeled YM3526.

So of course if there’s no synthesizer, there’s no sound. The clues were all there; I just completely missed it at the time. But there is sound. So there is a synthesizer.

Every board has a story

Let’s take a closer look in the area of the synthesizer. 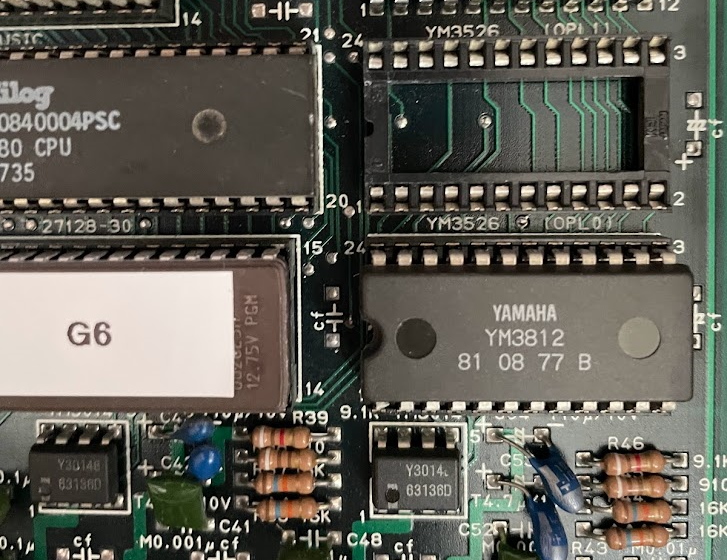 There’s an open socket, and a YM3812 beneath it. The Triple-Z80 was designed for dual YM3526s; and the YM3812 should be completely backwards compatible, and on its own, might just be evidence of a repair. But then I look at the EPROM to the side of it. SNK EPROMs on my other boards from the 1980s have a distinctive sticker with a two-letter code. Let’s take a look at the other Triple-Z80 I own, Lee Trevino’s Fighting Golf. 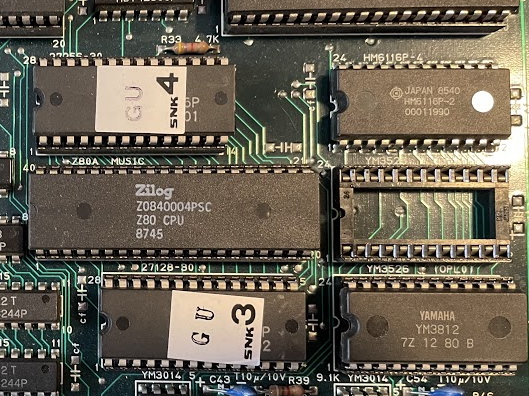 Now, Fighting Golf also has an empty socket and a YM3812. But if we look at the MAME source code, it was designed to work that way. (The YM3812 is pin and software compatible with the YM3526) Plus, Fighting Golf, despite the license from Lee Trevino. is a pretty common game and not super desirable. Definitely less desirable than Athena, which created the predecessor to popular character Athena Asamiya. 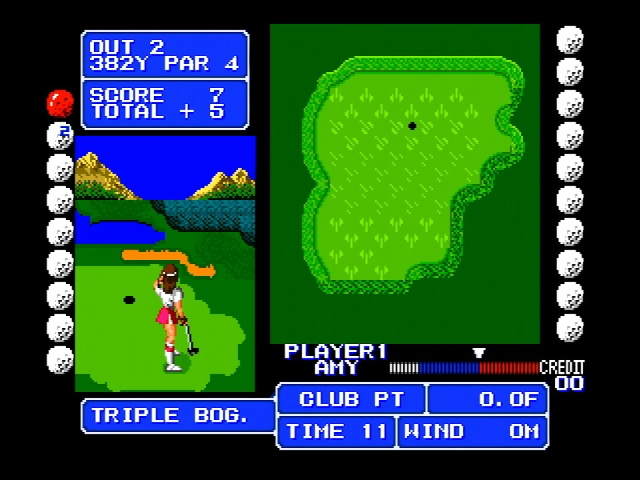 Now, this Athena is in the state I bought it in, unmodified– unmodified by me, at least. My suspicion is that as a naive buyer thinking she found a deal, I actually purchased a conversion; a Fighting Golf that copies of the Athena ROMs were installed in. Of course, this could’ve happened long enough ago that maybe the person I bought it from was the one who was tricked, and didn’t realize what they had. I mean, I spent months not noticing the sound effects, surely other people could too.

In any case, since I already have Fighting Golf, I don’t want to convert this Athena back. Instead, let’s finish the job.

Plop in the chip

So, you can buy YM3526s and YM3812s online, as it turns out. Since the YM3812 there seems to work, and is backwards-compatible, there’s no reason not to leave it in place. I decided to get a YM3526 to fill the other slot, though, as it’s more accurate. (Plus, I also had the hope that as a less desirable chip, it was safer to trust online sellers.) 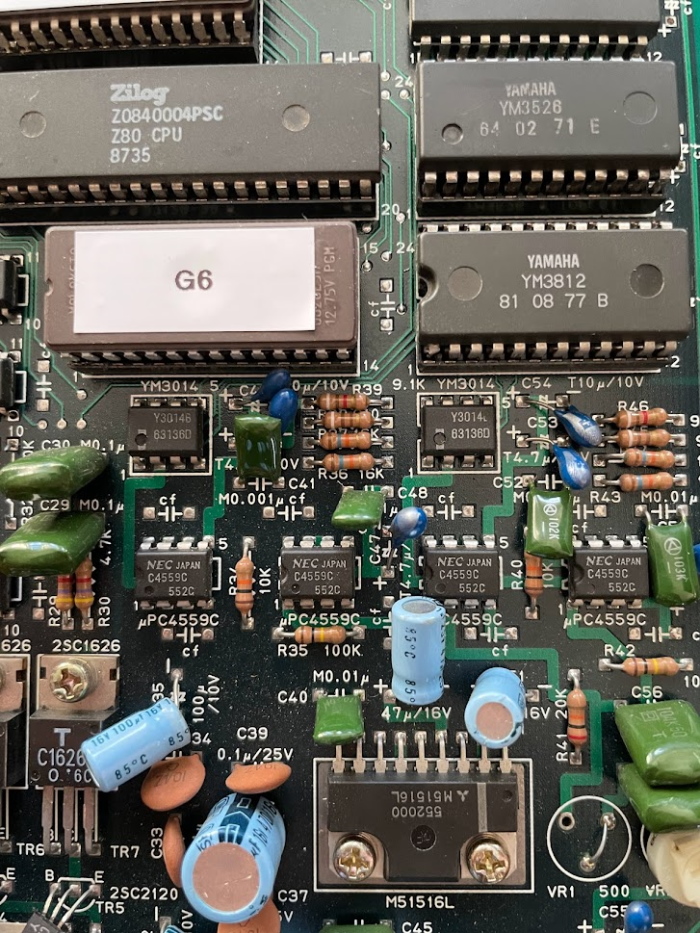 So with the chip installed, the problem is solved, right? Such an easy fix doesn’t warrant a blog post, I’ll just tweet and call it a day. Well, there is a post here, so it didn’t work. The audio still isn’t there. And all the clues as to why are already posted in the above image.

Back in the System C post, I noted that one way that board differed from the Sega Genesis was the use of a YM3438 synthesizer, whereas the original model of the Genesis used a YM2612. One way these chips differed was through output impedence; therefore, you might wonder if that is also the case for the YM3526 and the YM3812. What you might find interesting is not only that is not the case, it's impossible for it to be the case! The OPL synthesizers have only digital outputs; a separate DAC chip, the Y3014, is required to get analog audio output. 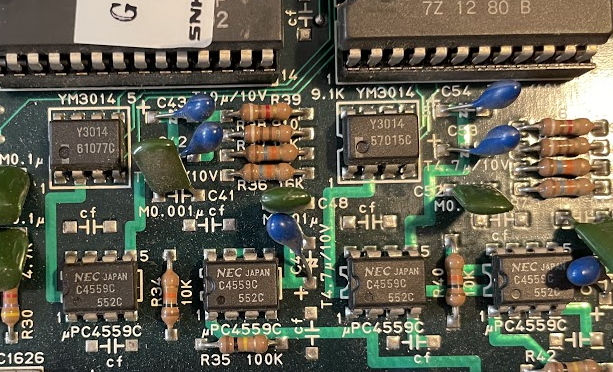 On this Athena and even on my Fighting Golf, both Y3014s are populated for the two synthesizers. This is pretty lucky, since otherwise this mod would be a lot more work.

When you have two chips, both outputting sound, how do you mix the sound together? You can’t just hook the two outputs together. If that was the case, imagine where one chip, the background audio, was outputting, and the other, the sound effects, was not. The voltage Vbackground audio would be output not only the amplifier, but to the output of the other, where the circuit is trying to keep Vsound effects at zero. So one thing an audio mixing circuit needs to do is to include resistors to provide a safe place for that voltage difference to burn off.

While plain resistors could be used, a potentiometer, or a variable resistor, is very useful here, because it can be used to adjust the audio balance. The downside of resistors here, of course, is that they’re going to make your audio quieter. Loudness was clearly a priority at SNK; as I discussed in the last post, that’s the main reason to feed -5V to your audio amplifier– a louder game could attract more attention in arcades, which are not known for being quiet as-is.

So on Fighting Golf, and presumably on other single-synthesizer games as well, SNK removed the potentiometer and replaced it with a jumper. 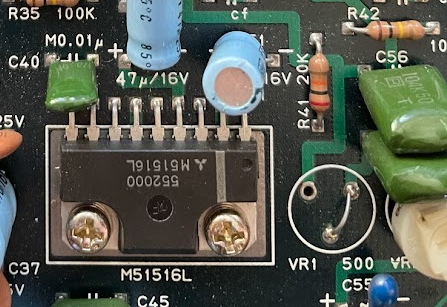 That jumper is present on the Athena conversion, and therefore, the sound from the second YM3526 can’t make it to the amplifier. 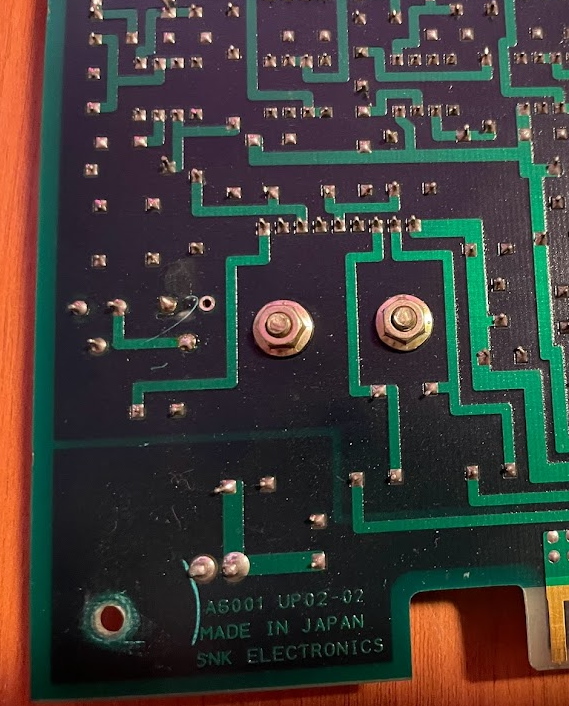 The Triple-Z80 is made up of two PCBs, and the audio circuit is on the front one. They’re both arranged so parts are on the outside, and the pins are on the inside, somewhat protected. So I was surprised to see a scratch on the back of the PCB, right where the offending jumper wire is soldered. It makes me wonder if the boards were all manufactured generically, and only when this one became a Fighting Golf was the jumper added later. 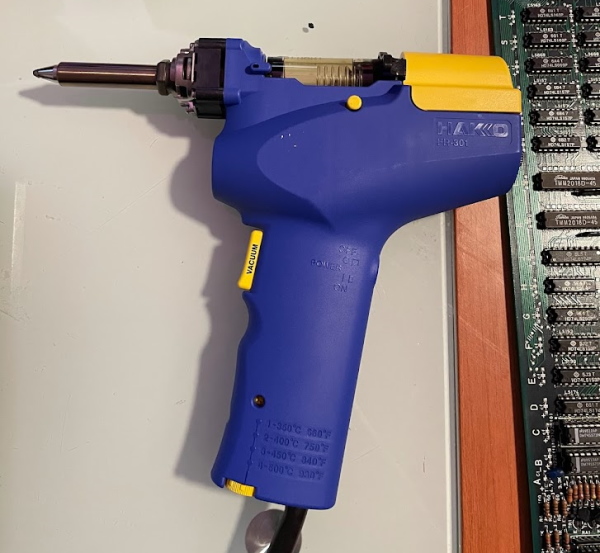 In any case, to remove the jumper, I decided to use my Hakko desoldering gun. It’s never made an appearance on this blog (the project I got it for being a bit stalled), and it’s massive overkill for this project, but hey, if you have it, why not use it? It does very clean work. 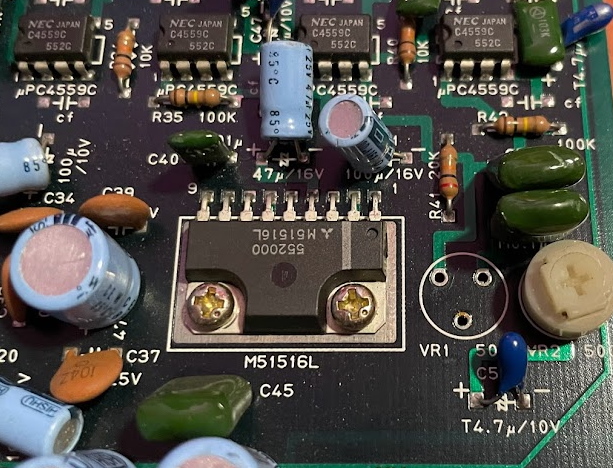 At this point, if I were to fire up the board, there’d be no audio at all. Which would be silly. So now we need a variable resistor. I went with 500Ω, because it had “500” written next to it, and because 500Ω didn’t seem unreasonable for a mixer that takes place before final amplification. If you happen to have a real Athena and the value of VR1 isn’t 500Ω, please let me know. 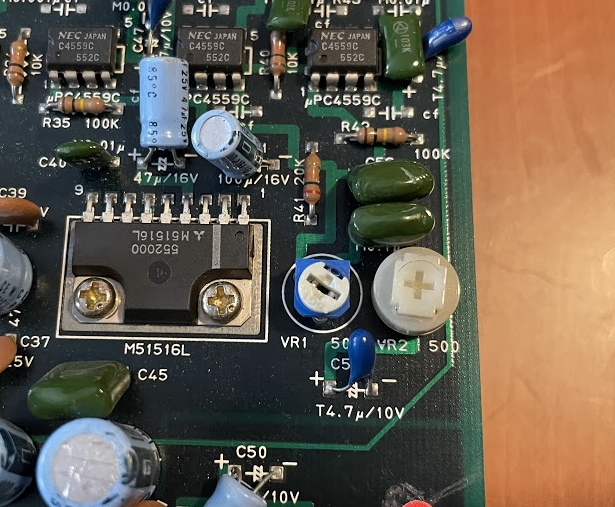 The new potentiometer is not the same color or style as the original volume pot next to it; I didn’t really think this was a huge deal, especially since this board is already likely modified. It makes this modification more obvious to have a different part there. That’s what I tell myself to sleep at night, anyway.

We now have both sound effects and music! This is a big improvement to the game, since its enemy collision is not generous and there’s not much knockback or invincibility. Having the aural feedback you’re being hit helps, and even though I didn’t notice, I do play better now. (Of course, in the video I’m not really playing)

Since that last charge pump blog post I’ve ditched the -5V charge pump entirely, and now use an Axunworks arcade power supply for getting negative voltage, in a case that (unlike a typical arcade power supply) I feel like I can leave on my desk without needing to risk touching 120V. Overall, this is a pretty solid setup for playing Athena, and was a very easy change to the board. I don’t support people converting Fighting Golf, but if you’re going to do it, do it right. 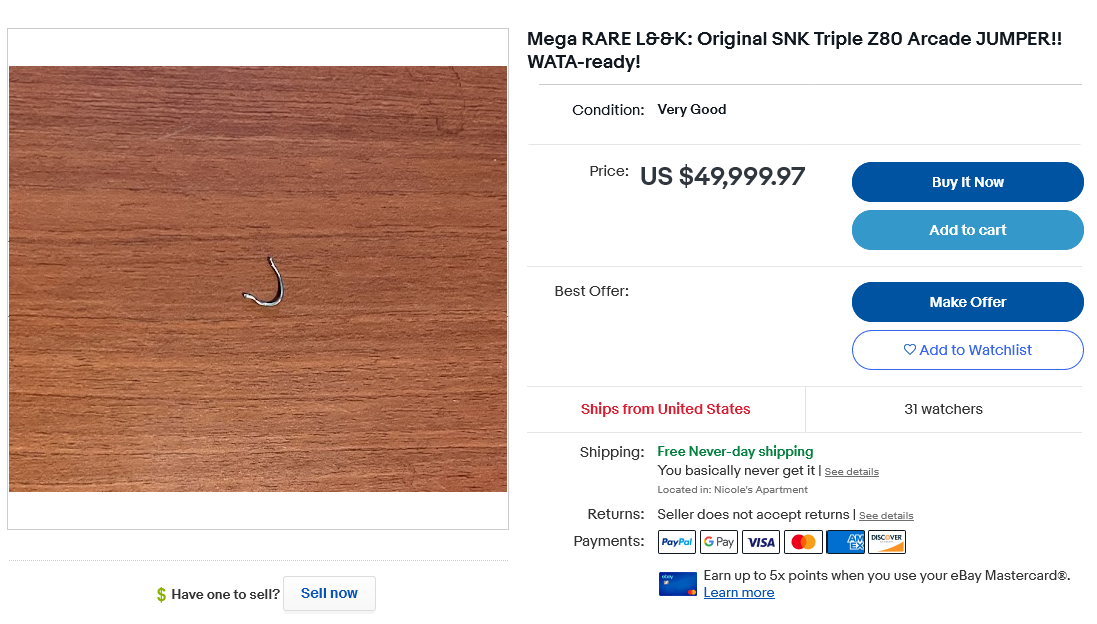