The Soviet Union was an ancient Eurasian empire based in the city of Moscow, a former Mongol vassal that came to make Mongolia its own vassal. Its state ideology of communism has caused almost as many wars as differing video standards have. But let’s face it, you already know all that. What about the video games? Surely they had video games!

During the Cold War, a period of conflict between the “Western bloc” led by the United States of America, which claimed to adhere to the ideology of representative democracy, and the “Eastern bloc”, which was led by the aforementioned Union of Soviet Socialist Republics. And we’ve already seen that two Western bloc powers, Japan and the Republic of Korea, were unable to mutually recognize copyright law, you can guess that copyright law mattered even less on opposite sides of these superpower-led blocs.

In fact, in 1971, the Soviet Union abandoned its in-house computer system development, which included some very interesting experimental concepts like balanced ternary, in order to adopt Western designs like IBM’s System/360. However, it’d be a lie to state that the Soviet Union didn’t have the production capability; even though the machines were produced to imitate western standards, they were wholly of domestic manufacture. 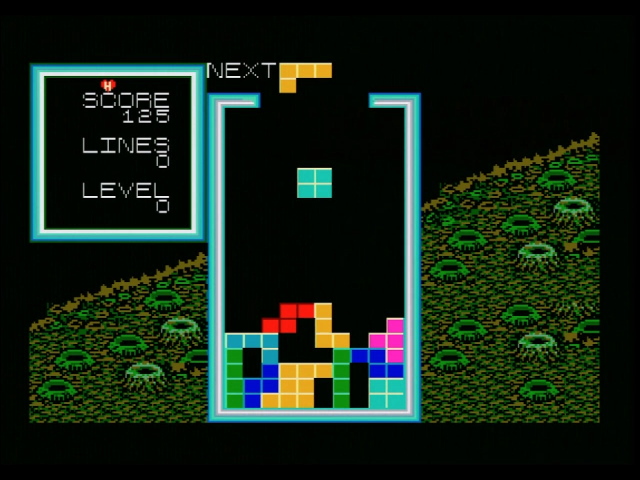 The famous game Tetris originated in 1984 on the 1978 Elektronika 60 computer. This was a clone of the DEC PDP-11, specifically imitating the 1975 LSI-11 model. (Well, the version above is running on a Korean pirate Master System-based arcade board, but that’s just for show) And what was Elektronika?

Elektronika was not a company in the usual sense we’d see on this blog; the Soviet Union was not a capitalist society, after all. It was the main brand name of Minelektronprom (Ministry of the Electronics Industry), a division of the Soviet government. And it was used by a huge scale of consumer electronics, from high-end computers, to various models of digital watches. Let’s talk about watches.

The humble LCD watch is a very impressive bit of technology. After all, it has to constantly power a display (LED watches already failed here), do the necessary conversion to display the time, increment the seconds, and handle user input for things like setting the time; and do all this with long-term battery life. 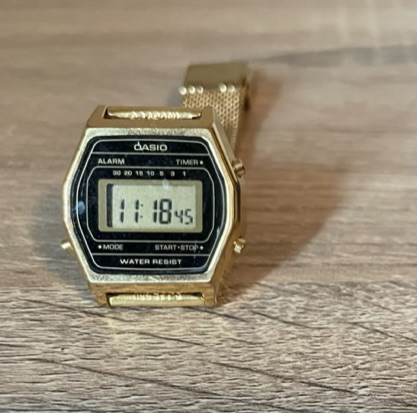 A watch like this is, in a broad definition, a computer. It has a program stored in ROM, a tiny bit of RAM, and a 32.768kHz crystal, which seems to have become the standard for real time clocks. Usually, as in the case of the Sharp SM5, a derivative of the TI TMS1000 series which powers the devices we’ll look at today, these are 4-bit microcontrollers. They don’t need to be particuarly sophisticated; in fact, sophistication would use too much power to let these things run.

When you have a computer like this, somebody’s going to want to use it to play games. In this case, that somebody was Gunpei Yokoi, engineer at playing card company-turned-toy company Nintendo Co., Ltd. Creating a game device using watch technology (even keeping the timekeeping element), this became the “Game & Watch” product line. 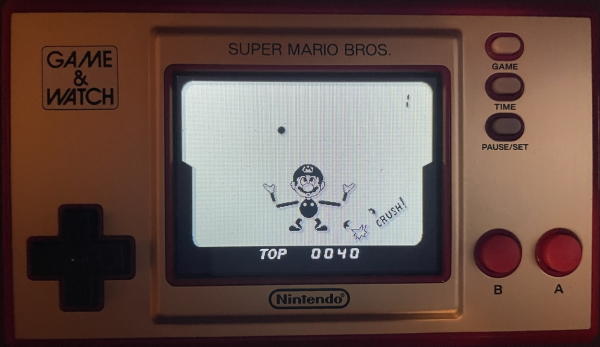 That’s not an original Game & Watch; you can tell because it has an LED screen, and doesn’t have a visible clock on-screen during gameplay. But that’s not important. What’s important is the concept of creating an LCD game like this. There are certain limitations the medium forces:

What this ends up meaning for game design is interesting. Game & Watch games are even more “pick up and play” than your average arcade game and are generally about score. Nintendo also aggresively pursued licenses like Mickey Mouse and Snoopy, because of the higher resolution art that made possible. This was an early example of a Nintendo philosophy known as “lateral thinking with withered technology” which we see even today, where their console uses an older mobile system-on-a-chip to successfully compete with much higher-end consoles.

But what this also meant was that any company that could make LCD watches could clone the whole concept. And remember who made LCD watches? 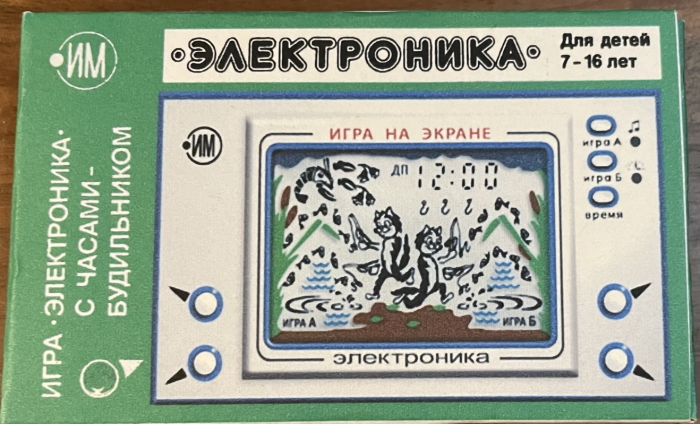 Here we have the Elektronika IM-32 (ИМ-32 in Cyrillic), “Kot Rybalov”, or Cat Fisherman. The concept is a cat who fishes by having fish jump onto his fishing rod; not quite sure if that’s how fishing works, but maybe things were different in the worker’s paradise. Much like the Game & Watch series, many of these Elektronika games were based off of popular Soviet cartoons; this is no exception. 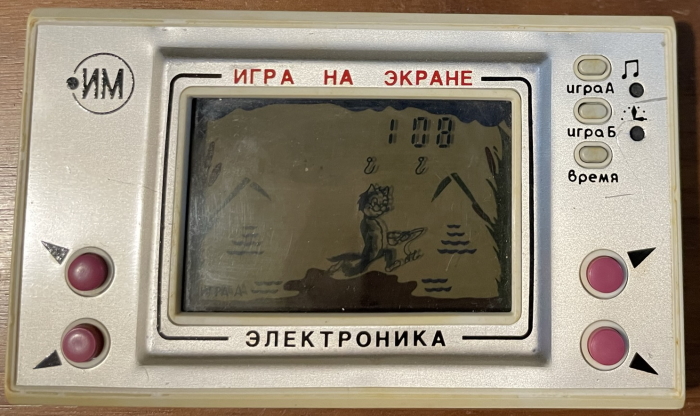 The four buttons allow you to move to four positions; of these, only three are used in game А, while all four are used in game Б. If you continually fail to catch fish, your game will be over.

The Game & Watch enthusiast probably already recognizes this game. It’s Mickey Mouse, which would be later released in a license-free form as Egg. (Egg is the version I’m familiar with, as I had it in Game and Watch Gallery 3, one of my favorite Game Boy games growing up.) In fact, MAME’s source claims the ROMs are completely identical. (Possibly, the entire die is cloned, but I haven’t seen confirmation of that and don’t have the microscopes necessary to do so)

But let’s take a look at the Nintendo game layout. I’m grabbing this one from MAME. 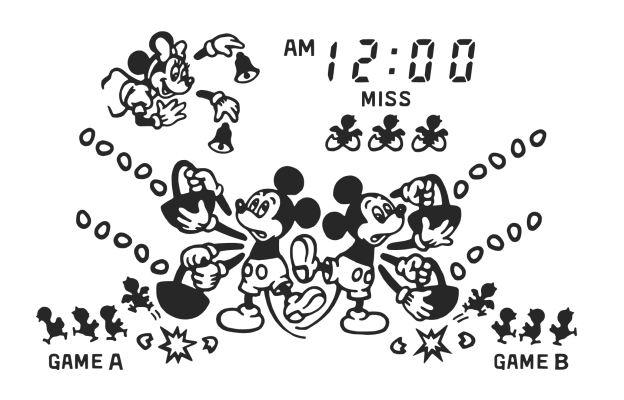 Notice that in Mickey Mouse as well as Egg, the eggs fall in straight paths. However, in Kot Rybalov, whose LCD layout is conveniently shown on the box, the fish move in high arcs. This does make it a little bit harder to tell where the fish are coming from, and increases the challenge a bit. And this change happened with no ROM difference; it comes solely from the LCD itself. 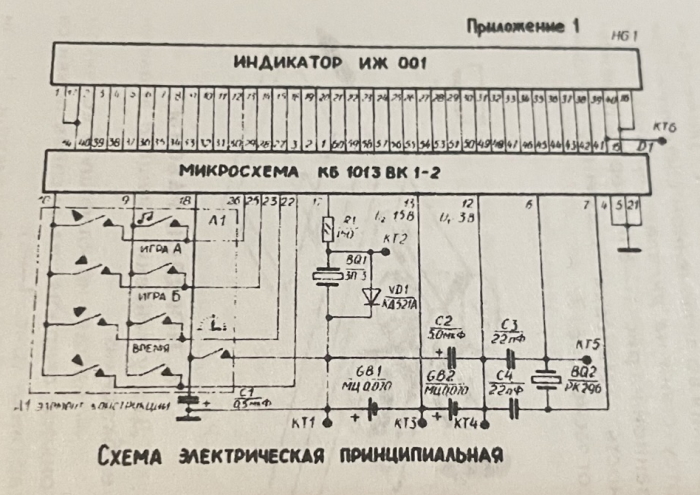 My particular example is not only boxed, it also came with the manual. And like many Soviet electronics, it actually contains a full schematic. While most of the work is being done by a single chip, you can see things like the buttons, which are on a simple 2x4 matrix. Of course, we can also just take it apart.

All of the components are on one side of the board. Initially, I thought the large silver circle was some kind of bizarre chip packaging scheme, but now I think it’s just the speaker, with the single microcontroller chip underneath. Other nice touches includes the hole for a surface-mount capacitor, with a protective layer of solder mask in just that strategic region. 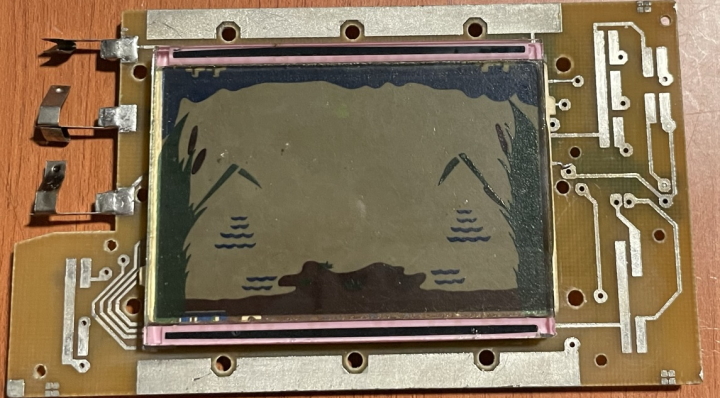 Here we can see the screen attached to the other side; I didn’t tear down more than this because I was concerned about damaging it. Note that the screen art is partially just painted on. This has the nice benefit of allowing for some color; later Nintendo Game & Watch games like Mario the Juggler would take this concept even further. 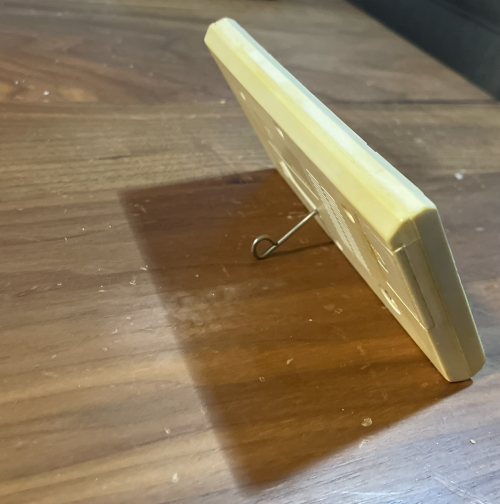 Closing it, we see the game can be propped up on a kickstand. It’s hard to play like this; the kickstand isn’t particularly stable, though that might be old age. However, since this is also a “watch” with a functioning clock, and the screen stays on at all times, it makes for a nice desk clock this way, playing an animation of gameplay.

End of an era

Let’s take a closer look at that speaker. Increase the contrast a bit. 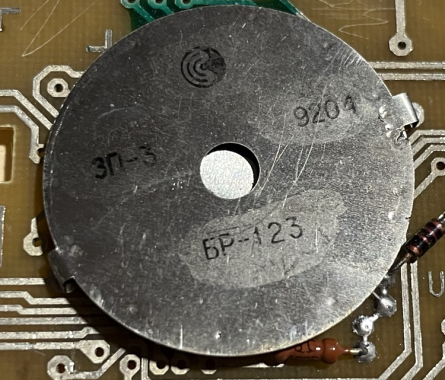 See the number “9204”? I’m not sure if Soviet manufacturing used similar datecodes to the west, but if so, that would imply the fourth week of 1992. In which case, this isn’t Soviet manufactured at all. The Soviet Union was declared to have ceased to exist as of December 8, 1991, as its former constituent republics declared in the Belovezh Accords.

I’m not sure when the line of Elektronika games ceased. Wikipedia notes that the ИМ line, of which this is a part, was succeeded by an И line post-1992. I’m also not sure where this particular example was made; it was shipped to me from Ternopil, Ukraine; so it seems possible that it was manufactured in the Severodonetsk Music Instrument plant in that state, which also made games in this line. But there were several other plants, and there’s no particular reason to assume that this game could never have crossed the Russia-Ukrainian border. 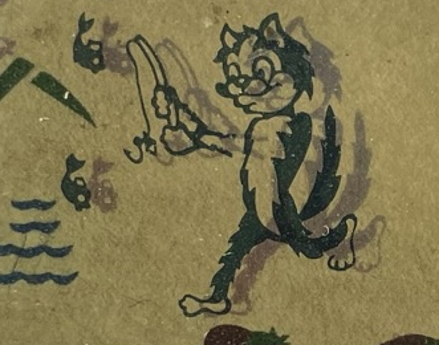 The line is gone today; the electronics industry of the Soviet Union had a difficult transition to capitalism. The Game & Watch, though, is not, thanks to Nintendo’s recent “Color Screen” revival series. And for now, at least, the cat keeps fishing.

It seems a bit crass to make a post about an item imported from Ukraine of possible Russian manufacture in 2022 without noting that at the time of this blog post, Ukraine is currently fighting off an invasion by the Russian Federation at great human cost. If this blog post made you want to donate to this blog, I really do appreciate it, but recommend that instead you give that money to an organization helping the victims of this conflict, like one listed here.