What’s the best-selling arcade game? The usual answer seems to be Namco’s Pac-Man. But there have been a lot of years since 1980. And so, doing a very scientific survey of one (1) barcade, I’ve found that there might be another competitor; at least, if we only look at boards. And hey, look at that– it even plays Pac-Man.

Have you ever heard of the 60-in-1? If you look around on the modern retro arcade scene, this is practically ubiquitous (can easily find at least one machine featuring on on my local craigslist with less than a minute of searching), but outside of it, I’m not sure that’s so. 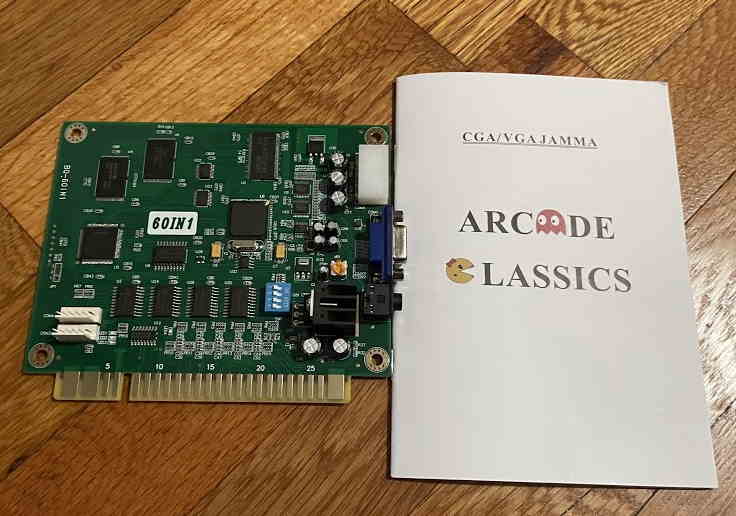 Mine came as a bare board with this adorable little folded-paper manual. (That’s half the size of a standard 8.5”x11” American sheet of printer paper, for scale) The board reminds me of the King of Fighters ‘97 pirate board I looked at a year ago. For example, both are powered by Intel XScale-derived ARM CPUs. 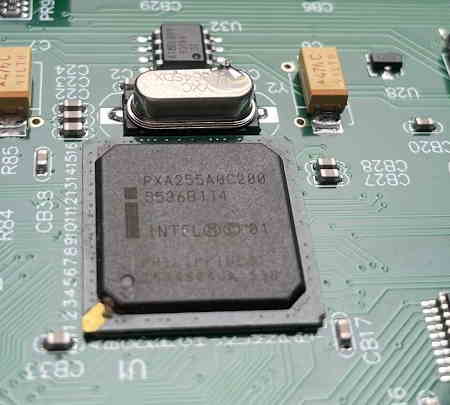 This here is a PXA225, which seems to be a little older than the PXA270 the King of Fighters ‘97 board used. I’m not sure if this is a new chip or a module that was salvaged from elsewhere. As a result, it lacks things like “Intel® Wireless MMX™ Technology”. Does that matter? As we’ll see, this board doesn’t need to do as much work as King of Fighters ‘97.

Another key feature of the 60-in-1 is its VGA port and PC Molex power supply ports. These allow for use of cheaper PC LCD monitors and power supplies, without the need of an upscaler. But the JAMMA edge is also fully populated, and can be used to provide a 15kHz signal. In the world of arcades, “CGA” means 15kHz analog video, rather than the digital “TTL RGBI” signal you might be more used to. That being said, all my captures are over the JAMMA edge.

The pin headers allow you to hook up trackballs for games like Centipede. These are still newly manufactured today; or at least, enough have been manufactured that they’re very easy to get. They’ve also been around long enough that MAME has some support for it and its predecessors; it seems to clock the PXA255 at 200MHz. It’s a bit amusing that there’s MAME support, as this thing likely runs MAME.

You might wonder how I identified this board at my local barcade. And the answer is simple; the menu is a dead giveaway. 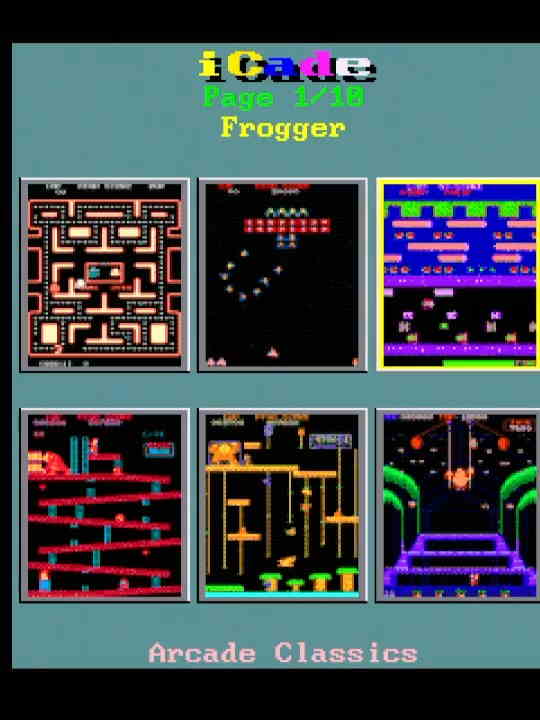 The 60-in-1 identifies itself as “iCade”, with a set of screenshots of various games, while playing a smooth musical tune. You can select any game, and even get a preview of the game– allowing you to see the attract mode without spending your precious coin. 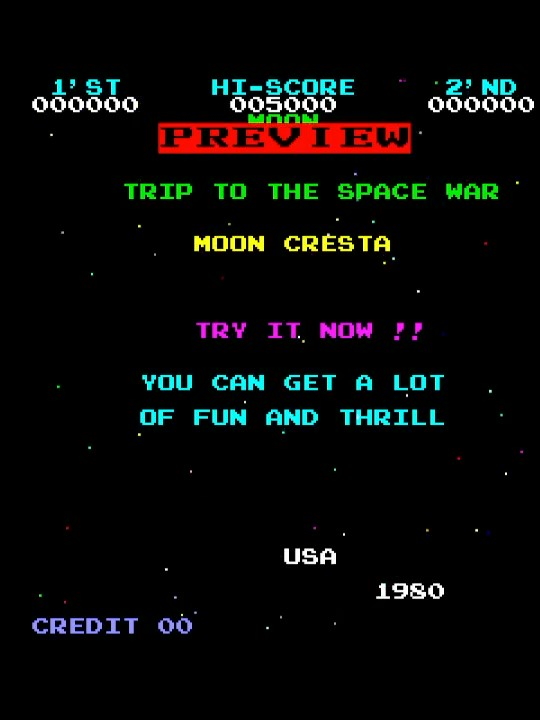 Of course, game manufacturer logos are generally removed. Even in this era where copyright treaties encompass essentially all nations, habits from the trademark era are hard to break.

That being said, most of these you see won’t be playing sixty games. For example, one I ran into was in a Donkey Kong cabinet, and had the options limited to Donkey Kong, Donkey Kong Jr., and Donkey Kong 3. This is all provided by a quite elaborate test mode, which also allows you to set the DIP switches. (The meaning of each switch? Why it’s in the manual) 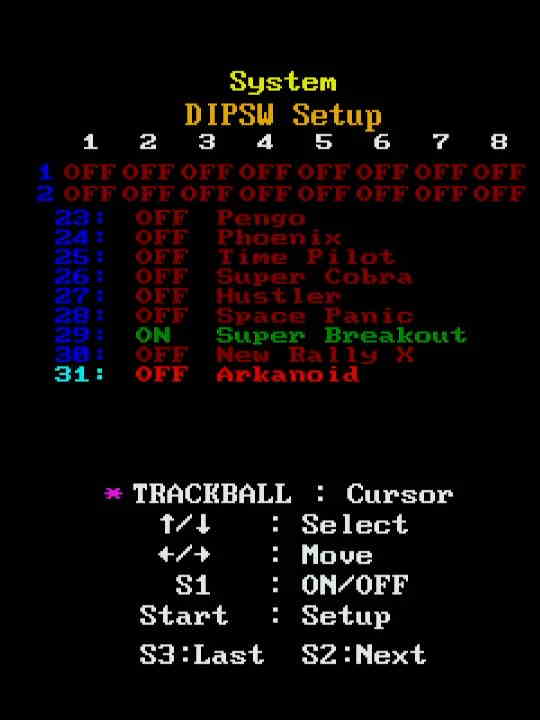 If you’re anything like me, you probably wondered what happens if you only enable one game. That gets rid of the iCade menu entirely; this board could be lurking in more places than that. For example, here I have created a board for a dedicated Super Breakout cabinet that, for some reason, uses a joystick. 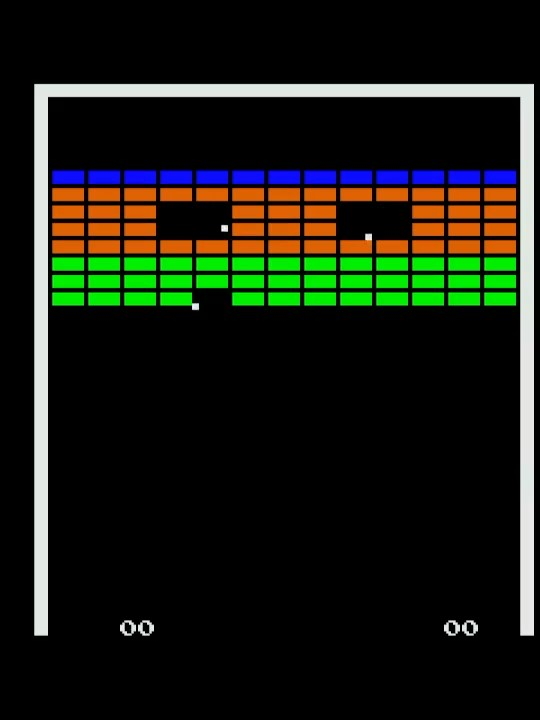 Disabling all games gets you all 60. A bit confusing, but better than an empty menu.

So this is basically an early 2000’s low-end ARM computer running an old version of MAME, right? And this means that the emulation is very hit or miss. Mr. Do isn’t bad. But take a listen to Gyruss. (perhaps consider lowering the volume of your headphones)

My poor ears! That is some clipping, and some clunky sound playback for sure. Of course, the game itself is playable, and since then MAME has improved quite a bit; but taking modern improvements might have compromised the ability to run on such old hardware.

A particularly infamous MAME inaccuracy is in Donkey Kong. A certain high score dispute revolves around the fact that the screen is drawn differently in software emulation, where it goes in chunks thanks to the screen buffering. Of course, the 60-in-1 replicates emulator behavior.

Does this mean that our hypothetical video game high score record holder was tricked by an arcade operator using a 60-in-1 board set to only play Donkey Kong? Probably not; his claim is that the board was actually examined, and I sincerely doubt anyone with a fragment of knowledge could confuse a real Nintendo circuitboard with the dimunitive 60-in-1. Let’s compare it to my Hero in the Castle of Doom, which runs on similar hardware, as it’s a conversion kit for Nintendo’s Donkey Kong Jr.. 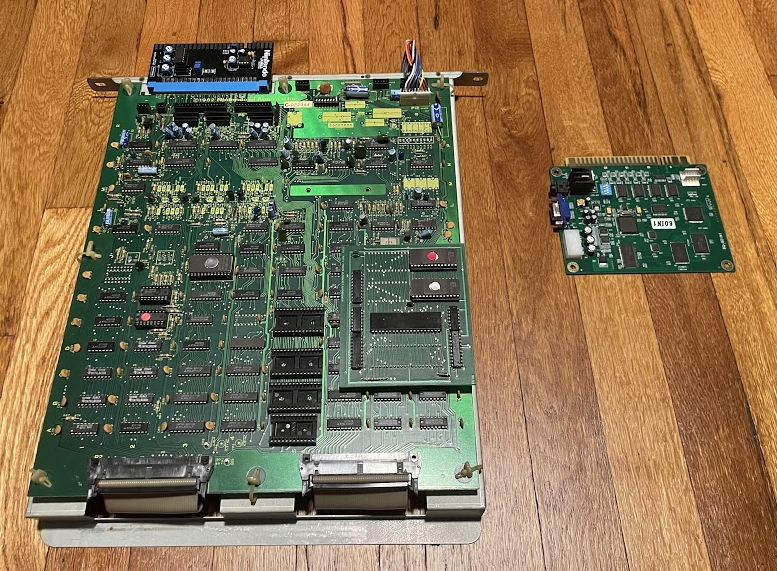 I will note that while the 60-in-1 has Donkey Kong Jr, it does not have Hero in the Castle of Doom. Mark one more up for original hardware.

One of the games on the 60-in-1 is New Rally-X. Not too surprising, right? I mean it’s a Namco classic. But something is a little weird here, and you’ll see it while playing. 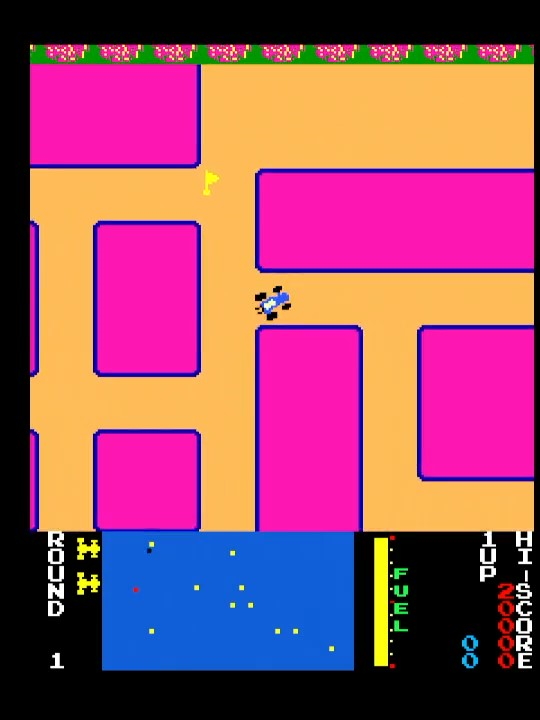 New Rally-X, you see, is a horizontal monitor game. You can take a look at it in MAME. 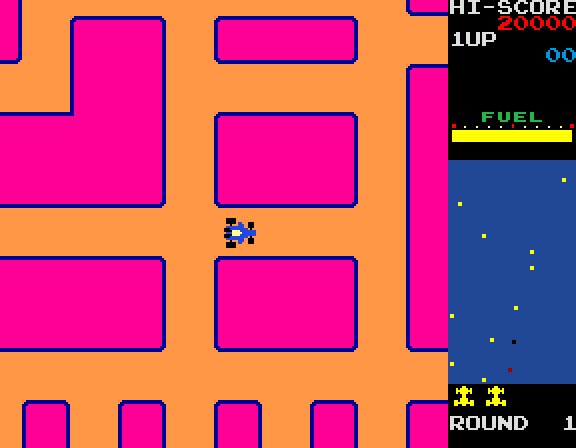 As far as I can tell, they just rotated the text to make it all readable vertically, and remapped the controls.

Note that Namco themselves would have a similar problem with their own Namco Classic Collection Vol. 2, a 1996 arcade title that included both Rally-X and New Rally-X, but with vertical screens. Of course, it being Namco and their own dedicated port, they rewrote the game more generally. 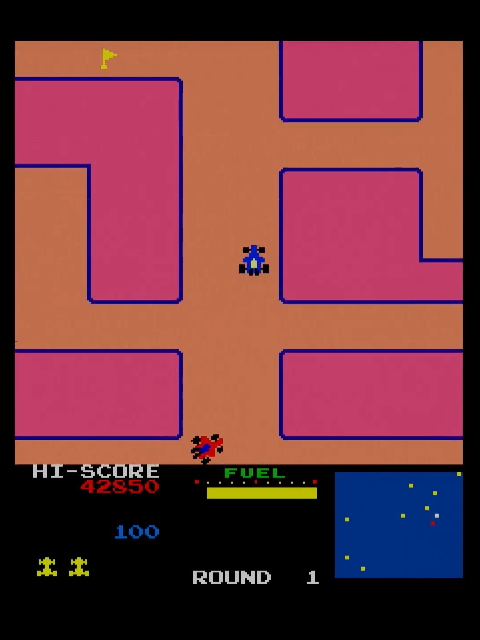 In the end, one thing everyone wants to know about for retro games is input lag. That’s a bit complicated to measure; for this, I’ll be turning to something not frequently seen on this blog; the Chinese CBOX supergun. 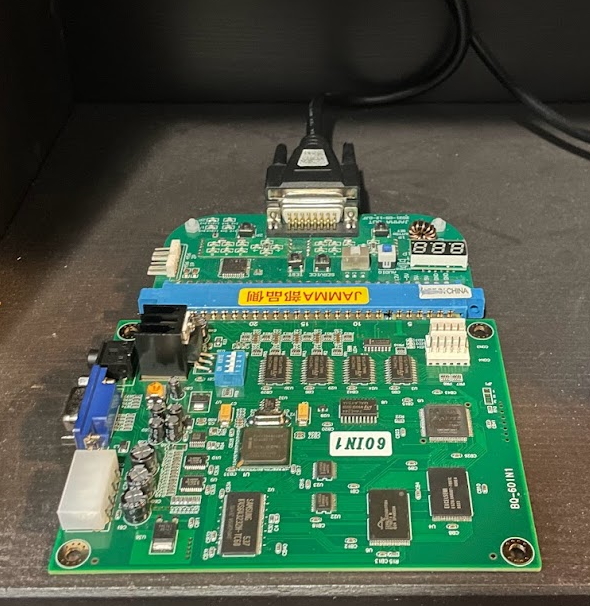 I bought this supergun to test it out awhile back because it is cheap and includes a consolized MVS; unfortunately, I didn’t like its power output, and its sound is also a bit finicky. These are both areas where it’s easy to damage equipment, so I don’t quite trust it. On the other hand, I don’t care as much if this particular board gets damaged. 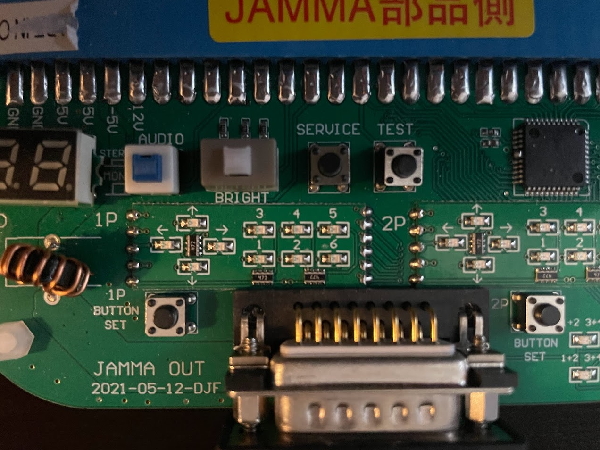 The reason to use it here is because the connector to the PCB features an array of LEDs; therefore, I can record myself playing this on a CRT, and use a camera to detect the number of frames. The video processing done by the CBOX (such as it is) is irrelevant. Playing Frogger I measured four-five frames before pressing the button and the frog beginning to move.

Is this bad? Four-five frames of lag is probably not the worst, and it’s certainly fine for Frogger. But that’s on a CRT. Add another one or two for an LCD (especially if a TV is used instead of a computer monitor), and choose a more time-sensitive game, like the speed-hacked Ms. Pac-Man that’s also included, and you will start to run into issues. And indeed, looking around online, it’s definitely the Pac-Man games that get the most criticism for lag. And if your machine has a modern eight-way joystick installed? Well that’s just too bad for you.

By comparison, I measured three frames of lag playing Frogger on my Intel NUC, running windowed on a 60Hz office monitor. So even in that situation, modern MAME on modern hardware will do better.

So, the 60-in-1 is, essentially, a chip weaker than a Raspberry Pi running outdated emulators. I would say it holds, essentially, no interest to enthusiasts beyond its ubiquity. It is, however, cheap and reliable, which is probably the main appeal to hobby arcade builders and modern operators.

I find it interesting, though, because in a sense this is the exact opposite mindset of the supergun. The supergun argues that the core of the arcade experience is the PCB; you can replace everything else with different equipment, and still get an arcade experience because you have the PCB. As a software developer, this is a natural mindset to me. The 60-in-1, though, presents the opposite, a more mechanical mindset.

The PCB is just another piece of the machine; the arcade experience is the furniture, playing a game at a cabinet. Replacing the PCB is like replacing the buttons. Is that wrong? Maybe. From my perspective, it degrades the experience. But I still go to the arcade and I’l even put a coin in an iCade machine, because it does have the wider experience.

Playing the 60-in-1 on a supergun setup, though? What’s the point?

game over - return of ganon

(mostly just a video test tweet, but damn that is definitely some audio emulation) pic.twitter.com/4lIJAhZnGK

And yeah, this board is what I was using to play Xevious, if you saw that tweet and was curious.