Have you ever become fascinated by a piece of hardware, even when it’s not objectively that useful? No? Just me? Well, that does explain why I have the LaserActive… Today, my fascination has turned to a few interesting arcade releases done by SNK Playmore in the dying days of the Neo Geo. And since I said arcade hardware, we’ve got to waste a few words talking about a “supergun”. No weapons, we promise!

We’ve talked about the Neo Geo a lot on this blog lately, mostly thanks to the Neo Geo CD. But we haven’t talked much about what made the Neo Geo its money; the Multi-Video System (MVS). Like the home Advanced Entertainment System (AES), the MVS used cartridges, and got its name from the fact that those cartridges were interchangeable, and from the fact that SNK put out arcade machines (in the United States, generally painted red) with multiple cartridge slots, as many as six games in a single cabinet.

SNK Neo-Geo motherboards generally are distinguished by a code starting with “MV”, then a number designating the number of slots, and then maybe some other letters after that. For example, the six-slot Neo Geo used the MV6 motherboard. The revised two-slot motherboard was called the MV2F, and was succeeded by the MV2FS. One-slot boards, which seem to have been the most common (and are popular with modern hardware hackers who “consolize” them for home use), all start with MV1.

So what does this code mean? 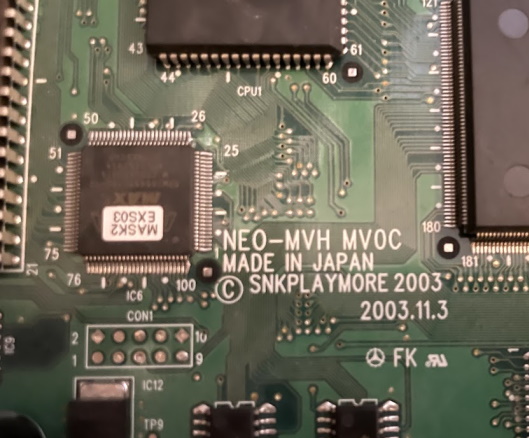 That’s right; in the dying days of the MVS as an arcade format, after the death of the original SNK, SNK Playmore decided to release versions of their last Neo Geo games as standalone motherboards, with no slot. And yes, these same games were available as AES cartridges, and as MVS cartridges. What on earth? 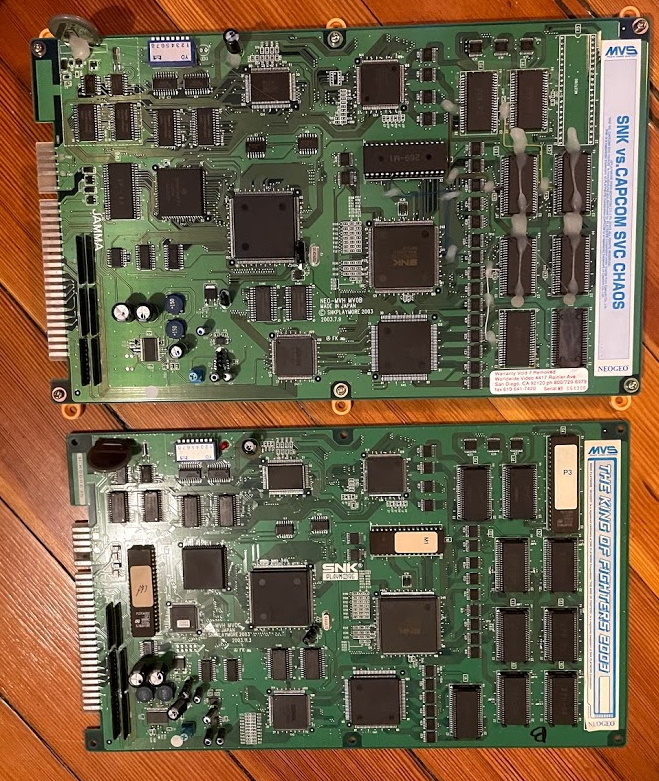 They don’t even have the same board layout! And look at the MVS cartrudge stickers applied to the side of the board, that’s adorable. 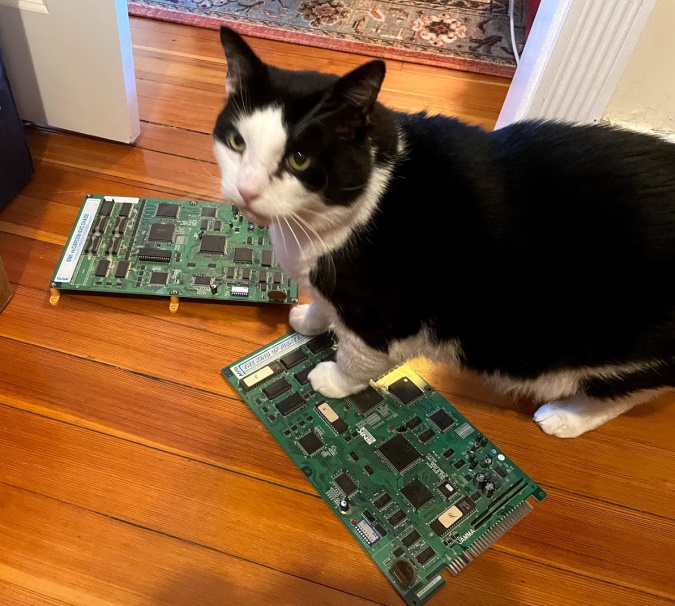 Marion, who you might remember from her appearance in the Aspect Star games, once told me that Roombas are just weird cats with a job. Arcade machines are similar. They’re weird game consoles with a job. And since they have a job, packaging is much more spartan than something sold for the home. 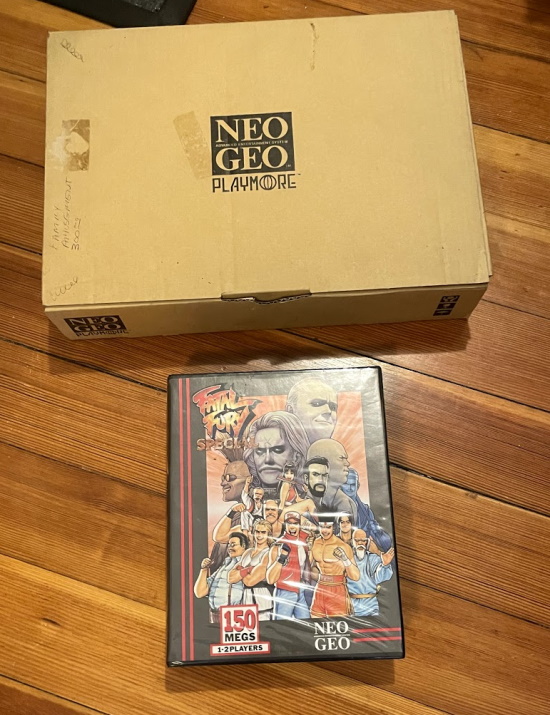 Standalone MVS cartridges also came in similar cardboard boxes. When you see them sold in AES-like colorful boxes, those are there because of aftermarket buyers. These boards were sold to people who intended to make a profit with them, and weren’t interested in the niceties that help make the AES so popular even today with collectors.

So, what do we get inside of this box? Well, to note, this is not by any means a new old-stock item; it came with a number of items inside, but I don’t know if this is everything that would have came from Playmore. I only have the board for King of Fighters 2003, so this is all from SNK vs. Capcom: SvC Chaos. 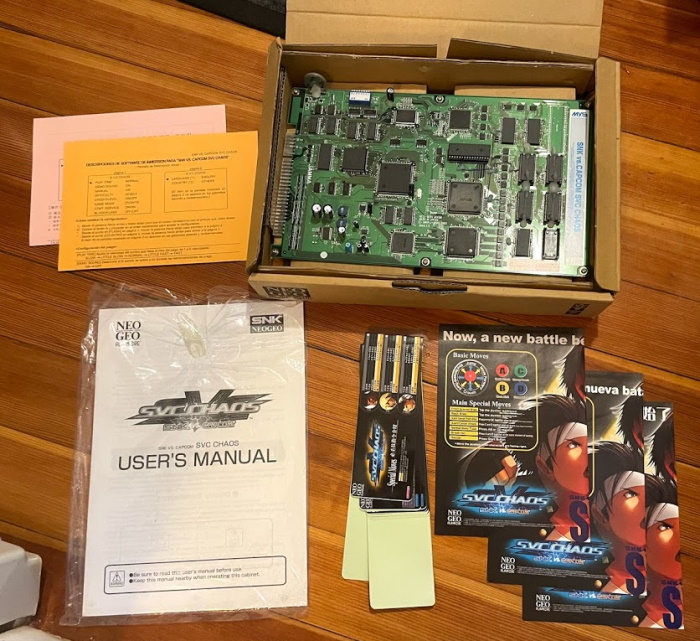 This is what’s called a “conversion kit” in arcade parlance. Rather than buy an entire new cabinet, which is a big heavy piece of furniture, game companies like SNK Playmore preferred to sell you a kit you could install into a pre-existing cabinet, thus “converting” it.

So, here we get an English-language user manual, and two colored pieces of paper, one in Spanish and the other in Chinese, describing the basic function of the menu. We also have arcade flyers and strips that have the control layout. My guess is that these would be intended for something like a Japanese “candy cab” arcade cabinet, where most of the branding was not game-specific. (Example photo from Wikimedia Commons, placed in the public domain) 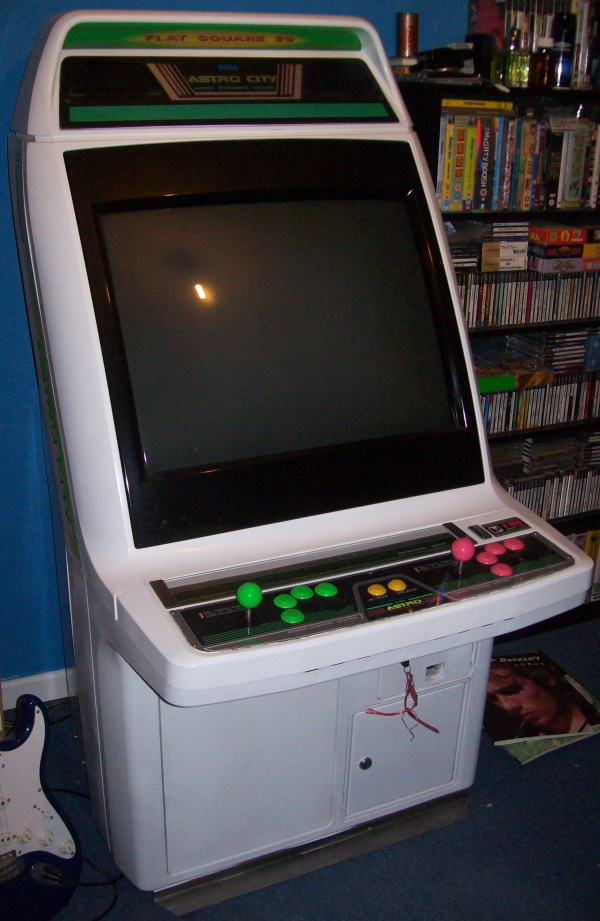 I’m not sure if SNK Playmore sold variants of this with marquee art. It’s actually pretty hard to find some good sources on how these boards were sold; you’d think this would be online (as it was 2003-4, after all), but what the Internet Archive has stored is pretty paltry. Since all of the documentation and branding are in English, Spanish, and Chinese, I’m assuming this was a generic “international” pack.

A conversion kit with nothing to convert

So here is the problem: I don’t actually have an arcade machine. No, the modded Arcade1up cocktail table doesn’t count; I’ve sold that, and anyway, it’s not configured for JAMMA, the standard these conversion kits were designed around.

So, what is JAMMA? JAMMA stands for the Japan Amusement Machinery Manufacturers’ Association, and is a trade group for the Japanese arcade industry. Actually, today they go by Japan Amusement Machine and Manufacturing Association, but that’s really not important. What’s important here is their 1985 standard for arcade machines; a pinout of a dedicated card-edge connector, which would allow game boards to be swapped like cartridges.

As it turns out, the manual of the arcade board gives the pinout as used by these cartridges (it’s a bit different than stock JAMMA, in adding a fourth button and not using the -5V pin). Remember this is work hardware, not play hardware. It needs to be repairable. Also notice that it handles both power input, controls, and audio/video output. 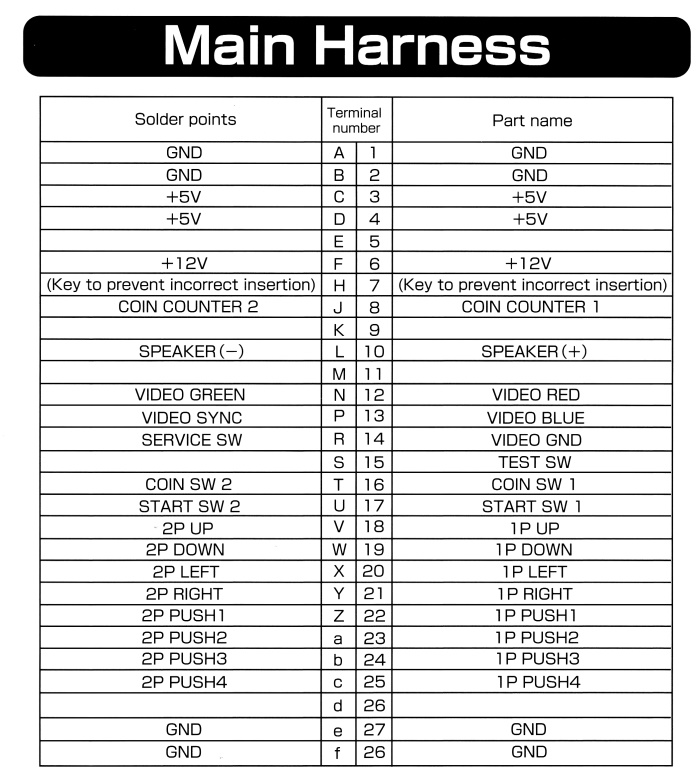 A nice thing about the SNK boards that follow this pinout (MVS boards with more than one slot often did not) is that no extra hardware is needed; for example, six-button arcade boards like Capcom’s Street Fighter series require additional wire harnesses for the three “kick” buttons, since the JAMMA standard doesn’t have enough free pins. (There is a later Chinese variant of JAMMA, used by the Pandora’s Box series of bootleg arcade boards, that repurposes a ground as a sixth button)

How does this compare to consumer RGB standards, like EuroSCART? The MVS boards also output video with a 15kHz horizontal sync timing and 60fps video. However, there are some major differences:

These differences mean that you can’t just take the signals off the board and feed them into something like a Framemeister, OSSC, or most non-arcade CRTs. In fact, these high voltages can be damaging! The amplified audio can also damage devices expecting line-level signals. Messing with arcade equipment at home is definitely a do-at-your-own-risk hobby.

Yeah, yeah, but I still want to do it

Not dissuaded? I was for awhile. After all, even once you’ve done all this, you’re not really getting the “real” arcade experience; a big standing cabinet is a key part of that. Nevertheless, eventually, I gave in. And got a Supergun. 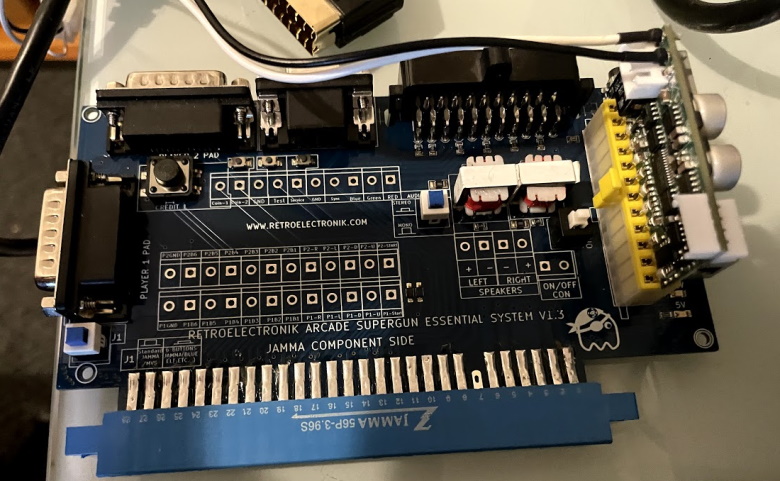 “Supergun” is the common name for these devices that take a JAMMA signal, and convert it to levels that are a bit nicer for consumer equipment. This one, the Retroelectronik Essential is, in true Nicole Express tradition, the cheapest you can get that seems to be of decent quality. For example, it just uses basic components to drop the voltage of the video signals, whereas high-end devices will include RGB amplifiers that output the correct levels. It accepts Neo Geo controllers, and is powered by a standard PC ATX power supply. Right now I’m using a beefy PicoPSU; this doesn’t have -5V, but SNK boards don’t use that voltage anymore.

I’m curious if a better Supergun will get me anything worthwhile; I’m also curious about the combined Supergun and consolized MVS that one frequently sees on Aliexpress. But this seems to do the job for now. Let’s turn these things on! I’m using the Framemeister without any SCART switchbox in the mix. 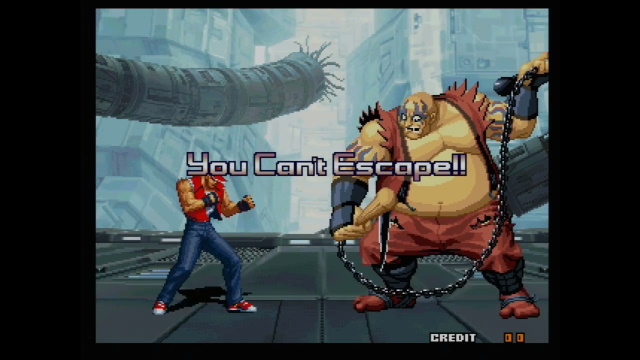 Digging into the boards

To note, this isn’t really going to be much of a review of the games. Both are late Neo Geo fighting games and SNK/Playmore was pretty good at those by this point. I’d say they both play pretty well, I enjoy both of them. 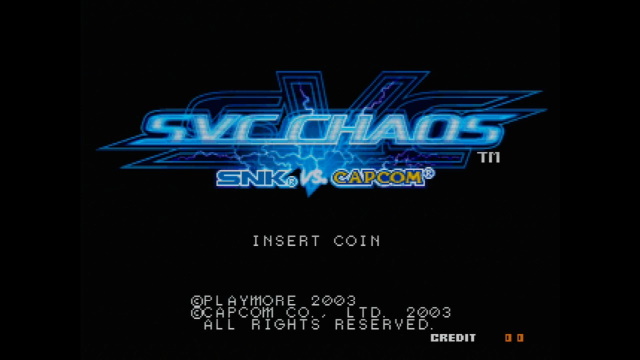 The game boots up without the familiar “Neo Geo” eyecatcher; a game this late would’ve used the “GIGA POWER” variant which was generally created on cartridge itself. Instead, it goes right into the game, though before it starts, it does show the “green glitchy garbage” that many MVS BIOSes seem to show. I don’t know why that is. 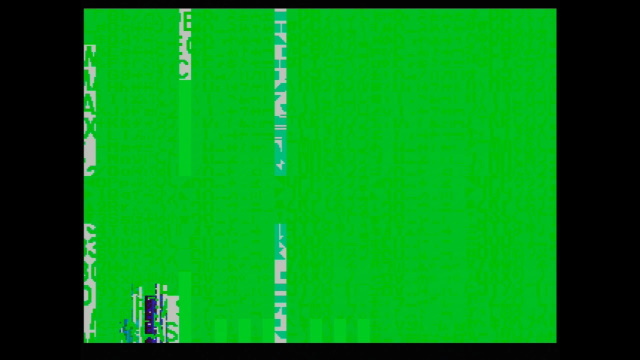 Let’s go into the service menu by booting with the first DIP switch changed. Judging by the multilingual contents of the box, I suspected this was an “international” region game. 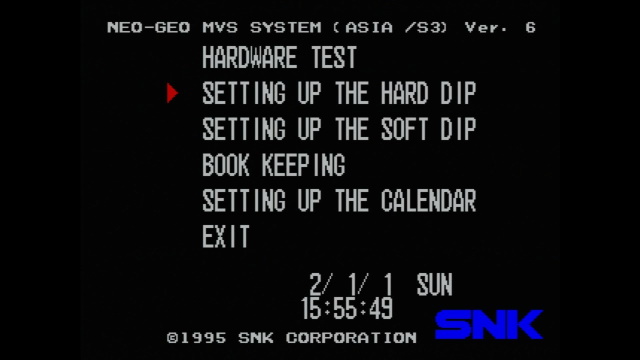 The BIOS is completely identical to that you’d find on a stock MVS board. It lists the region as “ASIA”; I think all regions outside of Japan, US, and Europe were classified as “Asia” but I’m not sure. One nice thing about being a non-US and non-Japanese BIOS is that it has the language selection in the software DIPs. It’s worth noting that despite being a fixed slot, it still has separate settings for the game software DIPs and those associated with the hardware. 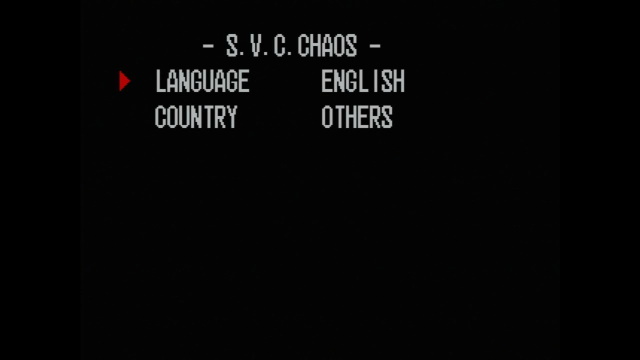 The only options are “English” and “Spanish”; the only options for country are “USA” and “OTHERS”. Maybe this is an American board after all… I’m a little surprised there’s no Chinese-language option, since there were Chinese versions of the documentation included. 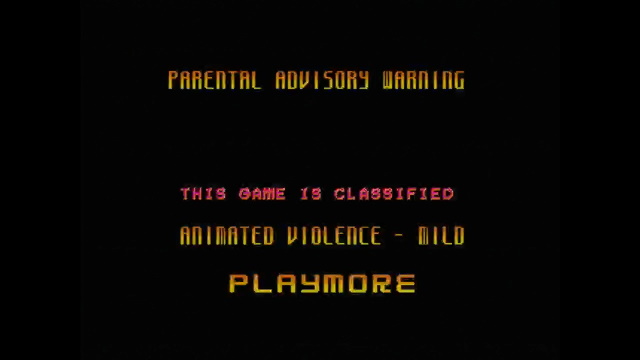 Changing the country setting to USA allows you to see this amazing parental advisory. I guess parents in other countries don’t need to be warned that a fighting video game contains animated violence. 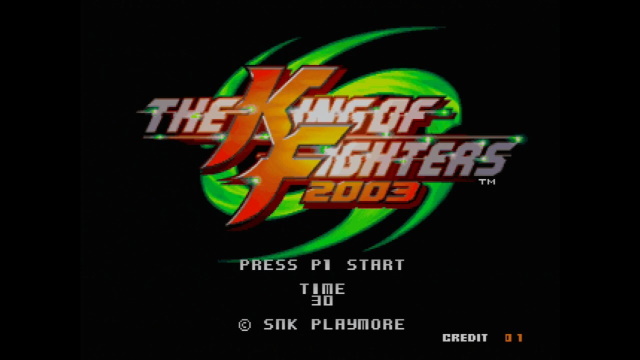 King of Fighters 2003 is a pretty good game. If you do not have another way to play this game, the MV0C board will allow you to play it successfully, and possibly even host it in your arcade to allow other people to play it.

Now, let’s look at that picture of the board again. Specifically, the top. Compared to, say, the side of a Japanese copy of King of Fighters 2003 for the AES. 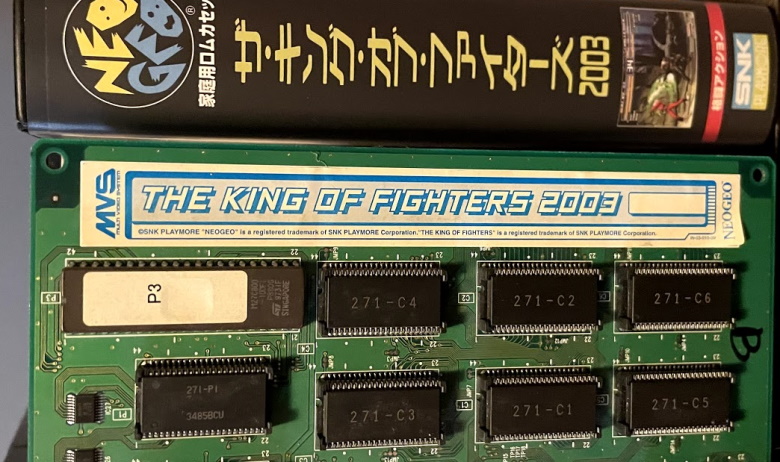 So imagine my surprise to see this: 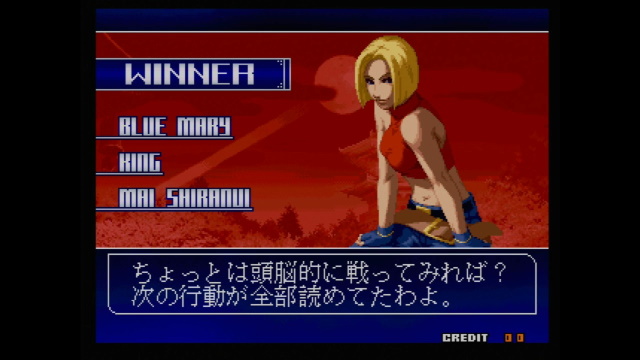 Yep, this is a Japanese version of King of Fighters 2003. It even has a fully Japanese BIOS, without a language selection. 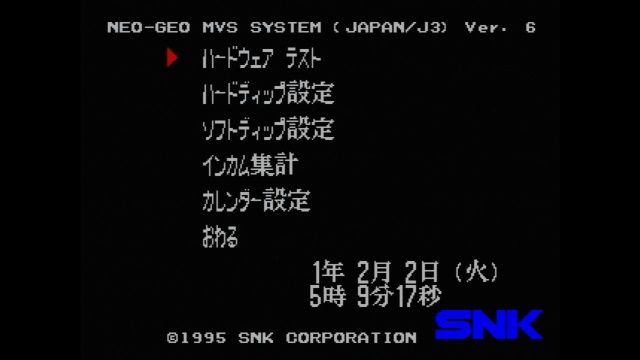 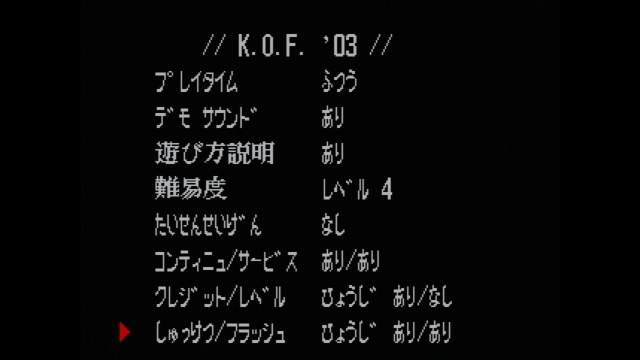 I guess Playmore wasn’t too picky about what sticker to put on things? You might think from the peeling in the photo that another sticker is underneath, but that’s not the case; though I guess someone might have replaced it.

These are, to me, pretty neat boards. They’re a snapshot of history; up until this point, buying an MVS system meant you’d be assured further software support. People who read this blog might be retrogamers, but arcade operators are not; they want the latest, because the latest will make the most money. So buying an MVS in 2003-4, when SNK Playmore was already giving up on the platform? Please! 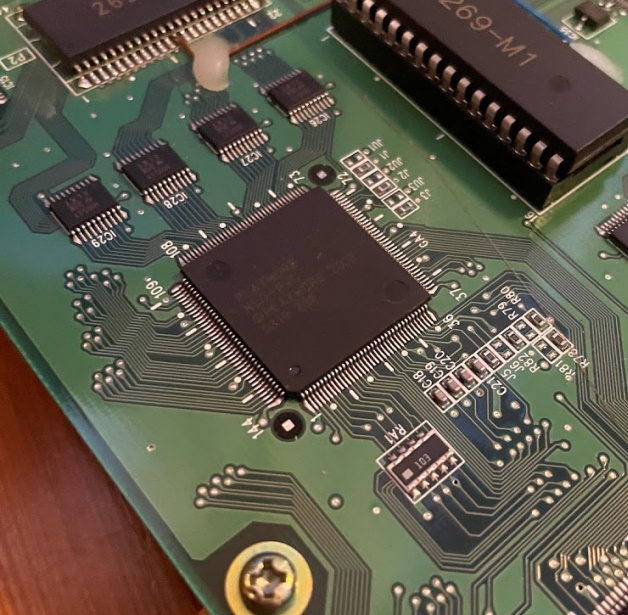 Another possible motivation was likely security. MVS bootlegs were rampant by the early 2000s (and are still rampant today); all MVS games that were used on MV0 boards included the NEO-PVC security chip, and apparently for King of Fighters 2003 parts of the the BIOS were altered and the game made to depend on them, so the ROMs couldn’t be decrypted and used on bootleg EEPROM-based MVS carts.

In any case, their time in the light was short. And if anyone has more definitive information on why these were made, I’d love to hear it; like I said, it’s hard to find. And now Nicole Express has access to arcade boards in the quest for interesting hardware! Surely these won’t be the last. Truly, a new battle has indeed begun. 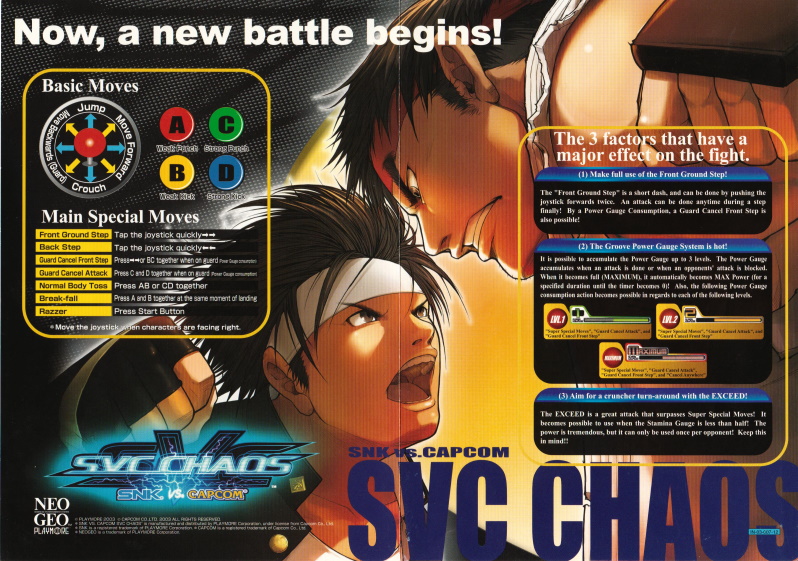