To capture a composite video signal and display it on my computer’s output, I need to use an upscaler that converts to an HDMI signal, then an HDMI capture device which in turn communicates with my PC over USB. Then, I can overlay my stupid face over it and send it to Twitch or something. But what if it was 1984? Of course, Twitch wouldn’t exist, nor would HDMI. So what’s the next best thing? 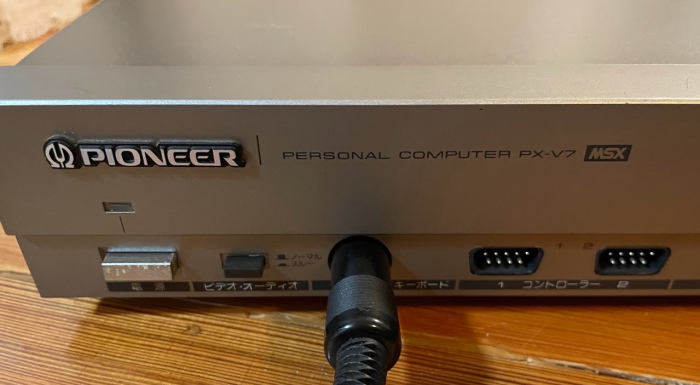 Today, we’re talking MSX. Surprisingly, despite making a lot of use of it in my Pitfall II blog post, my usual MSX, an MSX2 Panasonic FS-A1F, has never had a dedicated post on this blog. Perhaps it’s just not interesting enough.

Quick overview: MSX stands for Microsoft Xtreme. Well, the Xtreme part is iffy, and sometimes the Microsoft part is claimed to mean something else (“Machines with Software eXpandability” is a popular one), but it was in fact a series of standards promulgated by Microsoft Japan in collaboration with ASCII, creating computers that ran on a Z80 processor, using a TMS99xx video display processor (or later expansions) and a three-voice sound chip. If that sounds like an SC-3000, cool. It was exactly the popularity of incompatible but similar PC standards across Japan that led to the creation of the standard, after all. 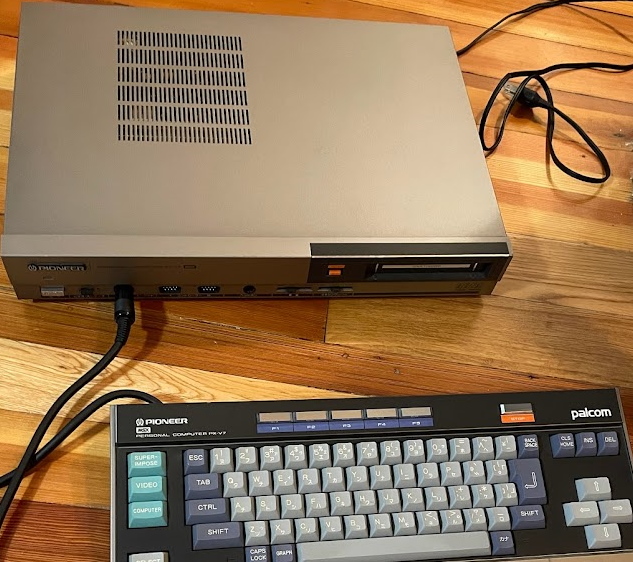 The Pioneer PX-V7 is a hefty machine, a solid metal box with a detached keyboard. Most MSX machines, by comparison, and my FS-A1F included, were much smaller affairs. You might wonder if that’s a floppy disk or tape drive on the right side. Nope! It’s a cartridge slot. A reset button is next to it, and in fact there’s a microswitch inside so to make sure you can’t “hot-swap” cartridges; which is to say, it will turn off the power. Still best to avoid it.

Still, this girl has some tricks up her sleeve that the FS-A1F could only dream of.

Like most MSX machines, the PX-V7 has a built-in second cartridge slot. From the beginning, the cartridge slot was the main method of getting that software eXpandability on the MSX, and the FS-A1F has two of those too. It’s all the other ports that are more interesting. Since this is an English-language blog, let me translate.

This machine can take both an input and an output for audio and video. It’s also worth noting that the use of a left and right audio channel is also interesting; even my FS-A1F only has mono output.

The machine also has an RGB output port; this is a digital output, which means it’s limited to eight colors, and I won’t be discussing it further.

How does it work? Ehhhh

I was curious how the circuit worked, so I cracked open the back. As it turned out, there is quite a lot of logic here. 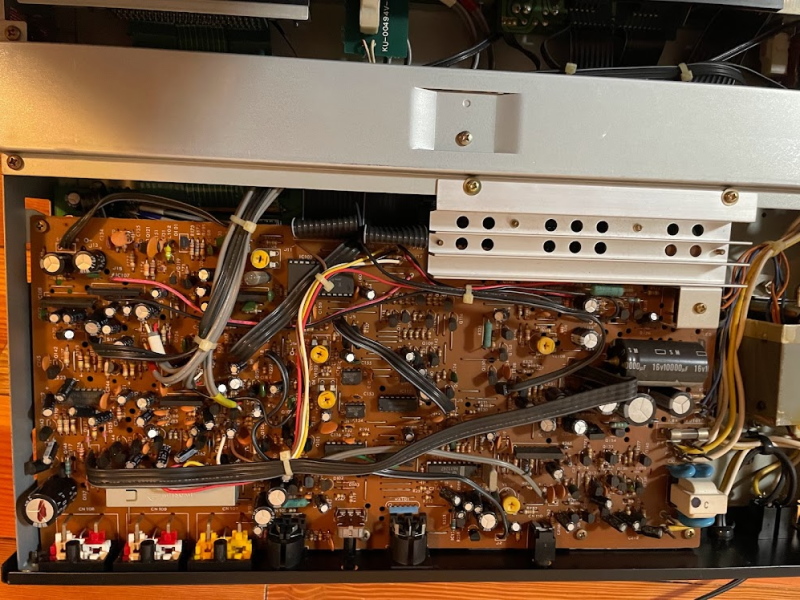 That analog board is quite complex! I had figured there had to be a decent amount of logic in here when I learned that the TMS9928A was used as the graphics processor.

The TMS99xx series of processors is a bit confusing, but I’ll summarize the major models with a grid.

I’m ignoring things like the TMS91xx series, the existence of the non-A TMS9918, and other complexities. But the key thing to note is that the composite variant has an EXTVDP signal. This is a signal designed for attaching a second TMS9918A chip and overlaying the video signal. This signal doesn’t exist on the TMS992x series, because the pin is instead used for one of the component outputs. 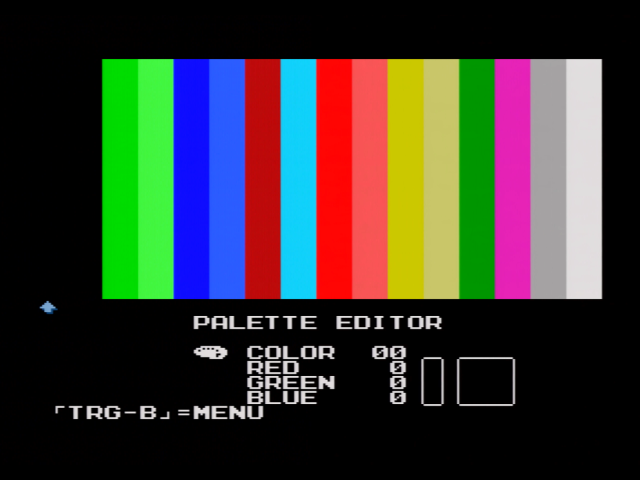 Remember the 16-color TMS9918 palette on the FS-A1F? You might notice that this isn’t a 16-color palette. There are 14 colors, plus black. Color 0 was reserved for this external overlay functionality; therefore, you’d still have 15 colors to work with, including both black and white.

However, a quick look at the TMS9918A datasheet shows that the TMS9918A wouldn’t work anyway. The EXTVDP signal is very specifically designed for an external VDP.

You see, the whole problem of overlaying two video signals is one of sync. Sure, they both might be at 60Hz. But what if one is at the NTSC standard of 59.94Hz, and one is at 59.95Hz? What if they are perfectly in sync, but vertical sync pulses don’t line up? TI doesn’t handle any of these questions with the EXTVDP pin. Instead, they just have you use exactly the same chip, exactly the same crystal, and most importantly of all, exactly the same reset signal.

So EXTVDP doesn’t work for overlaying a VDP’s output over an arbitrary signal. (In fact, I’m not sure if EXTVDP was really ever used in any major applications) In that case, one might as well use the TMS992x variant, since it will give you RGB.

The reason for the "component-like" signal (it predates actual component video as a standard) seems to be to both output something that could be used to create a higher-quality signal, but also was for the European market. Because both PAL and SECAM existed there, the TMS9929A was designed to output a signal that could easily be converted to either composite standard.

But that means you need to solve the sync problem by resetting the VDP and creating its timing to exactly match the input signal, which could be anything. And hence, you need all those analog electronics.

The Pioneer PX-V7 boots up with a standard MSX version 1.0 screen. Without an auto-booting cartridge, though, it doesn’t just drop you into BASIC. It instead shows an option screen. 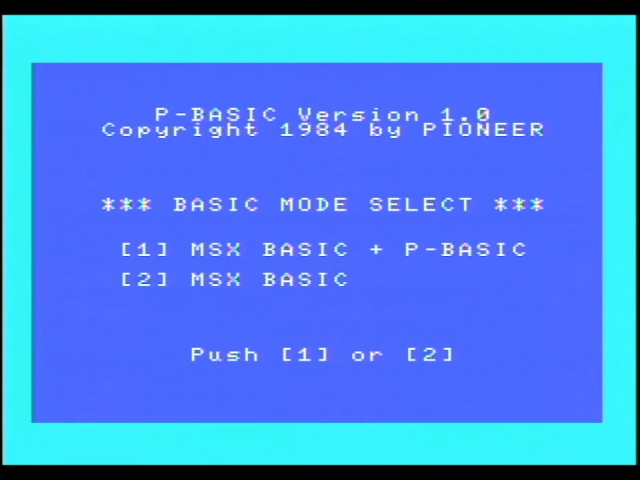 This computer gives you a choice between MSX-BASIC + P-BASIC, or just MSX-BASIC. What is P-BASIC? Well, the manual is available on the Internet Archive, but to summarize: P-BASIC is what makes the Pioneer PX-V7 interesting.

Essentially, P-BASIC is just a small set of additional commands that can be accessed from the normal MSX-BASIC prompt; these are all accessed through the CALL command (which can be shortcutted as _). Let’s do a quick demonstration. I have a Nintendo Famicom attached to the inputs. 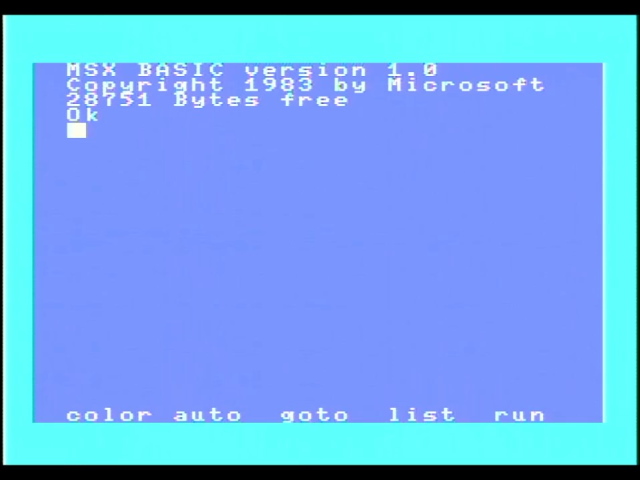 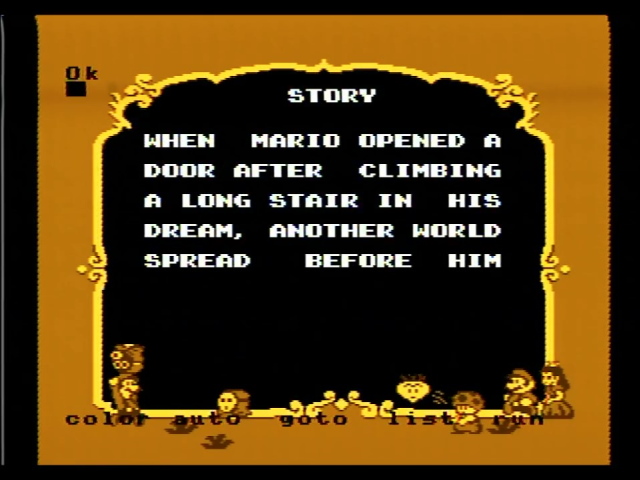 At this point, we have exactly what it looks like; the composite input (in this case, Super Mario USA) running with the BASIC prompt overlaid on top of it. We can also access the game audio using the CALL MUTE command. CALL MUTE OFF will “un-mute”; the PX-V7 has internal speakers, and this will route the game audio over them. (This is a “stereo-modded” Famicom; CALL MUTE L and CALL MUTE R also work) 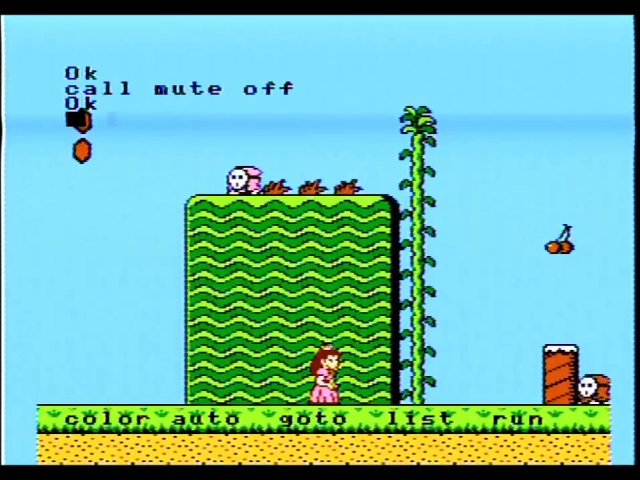 This is pretty much all you need to start doing simple things like, say, overlaying text on a VHS video, something that would be very hard to do back in the 1980s. Of course, you’d just record the output onto a new tape, so you’d probably need multiple VHS decks, but the PX-V7 wasn’t cheap either. 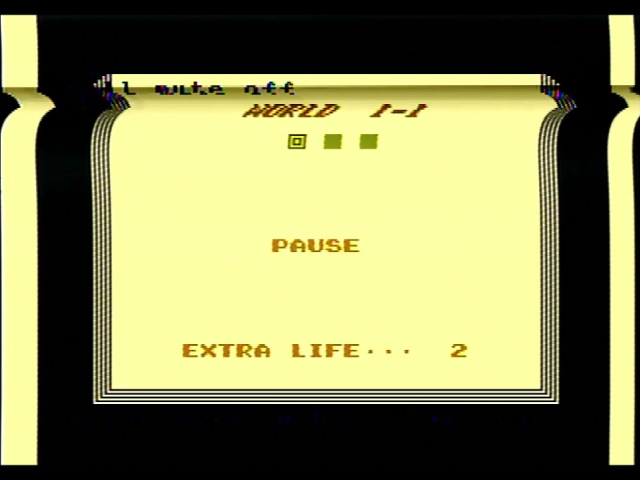 I noticed some nasty distortion on the pause screen, among others. The Famicom’s video signal is infamously out of spec; I talked about the timing a little bit in my post about the RetroUSB AVS. It’s 60.1Hz rather than 59.94Hz. I’m not sure if this is throwing off something. The distortion region is also distorted on the same row. 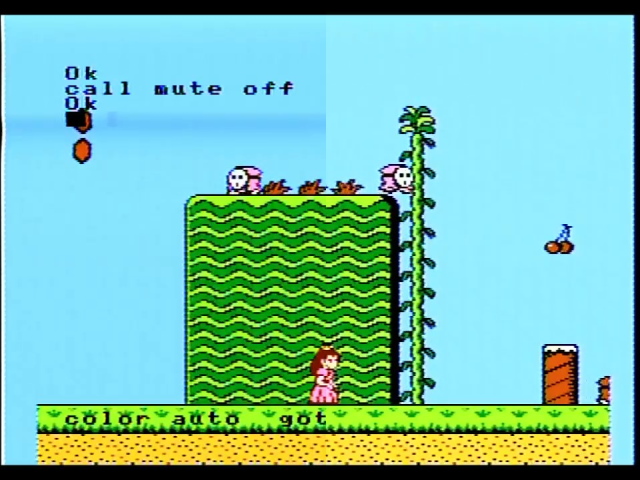 I decided to take a comparison screenshot showing half on the Famicom’s plain composite output (with a mod, as this is an original model) and half going through the MSX. You can see that the colors are a bit darker.

This distortion did not happen in the same way when I turned everything off and back on again. This makes me suspect that the relative timing of the two signals is to blame here. 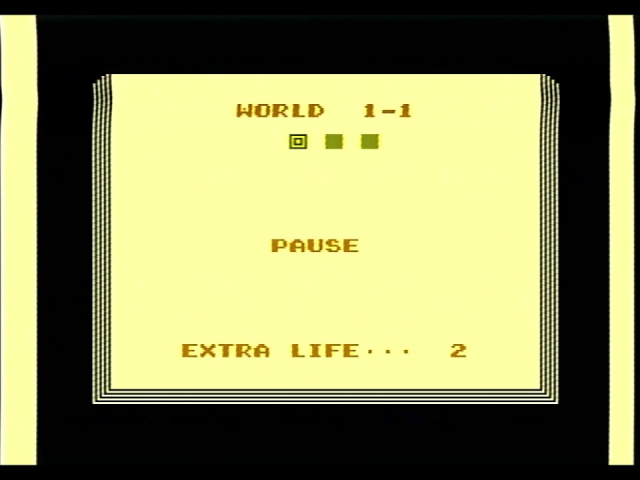 That talk of video timing made me wonder how the Nintendo light-gun might work with this system. So I hopped over to the TV, where I immediately found that even my composite CRT was having trouble with the sync signal this time. 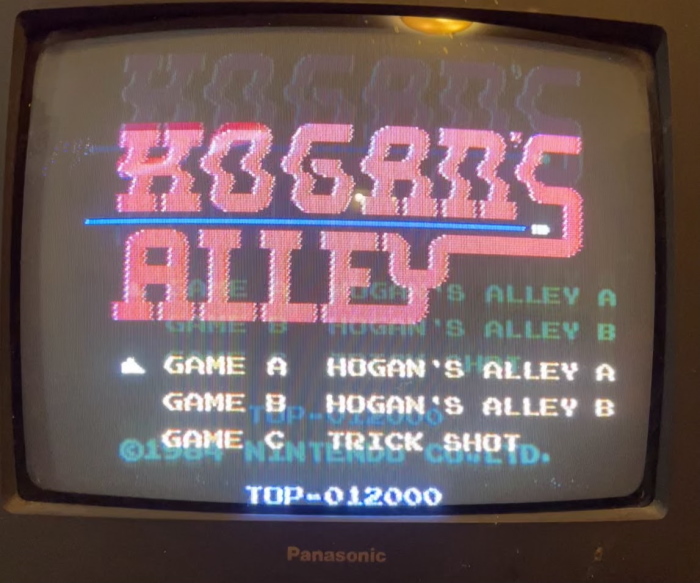 It only really happened on screens with a large amount of black, which makes me wonder if it has something to do with the differences between NTSC-U and NTSC-J (which is solely in the black level), though I’m a little surprised that Panasonic would use electronics that wouldn’t work in Japan. Once I get a better oscilloscope I want to take a look at these signals. 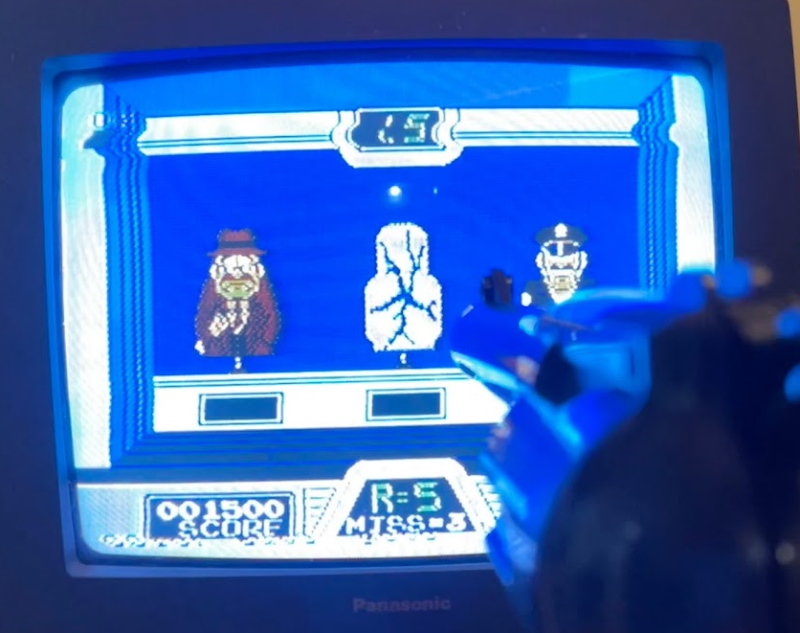 I did manage to successfully shoot a target in Hogan’s Alley, which implies that the signal is probably not being significantly delayed by the overlay. (This is using a Japanese setup, as noted, which is why the plastic gun is more “wild west” than “Buck Rogers”) You can see more of that nasty distortion near the top of the screen, though.

We’re not done yet!

So, this has been a quick overview of some of the video and audio overlay capability of the Pioneer PX-V7. But we’re not done yet. P-BASIC can do more than just overlay a BASIC prompt over your high school graduation, and there’s a reason this machine also bears the brand name Palcom– a brand name of video game giant Konami. Let’s all just hope the mail gets here quicker!