This is going to be a bit out there for Nicole Express, but I have to let you all know the truth. A terrible truth that only I, Nicole Express, could have discovered. A dark secret that shows that everything the ever-ominous they have told us about our world and our place in it is a lie. A truth that, yes, can be revealed only through 1980’s arcade boards. Maybe it’s not so out of place for this blog after all.

Today we confront our greatest fears, and with any luck, will come away from it stronger and greater than before. For today, we meet… Mr. Do. The arcade machine that proves it’s all wrong. After all, whether he’s eating, throwing, or crushing, Mr. Do is always very active. “Mr Do” in Jewish Gematria matches “I am an Imbecile”. As an imbecile myself, I obviously had to dig in to learn more. 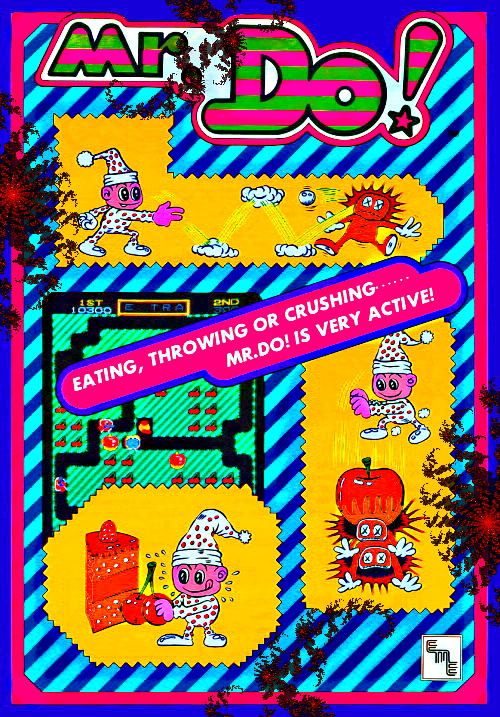 According to the supposed history, Mr. Do was released in 1982 by Universal. But this isn’t the Universal we all know and love for revealing the plans to resurrect the dinosaurs. Oh no, this is a much more sinister Universal… whose modern entity, Universal Entertainment, is the same company that when known as Aruze is responsible for the death of SNK’s original incarnation. 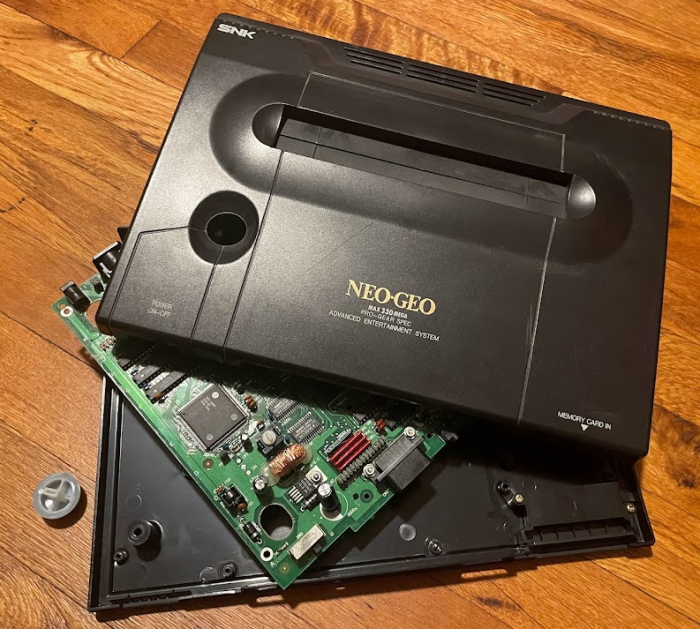 And yet the one whose quest we must understand today goes further than that. You see, Mr. Do’s first game was released in 1982– this is questionable, as we’ll see, but the sequence of events is the same. After releasing several more Mr. Do games, though, Universal was forced to flee the video game industry entirely in 1985. By 2005, they had been corrupted enough to merge with Aruze. What did you do, Mr. Do? 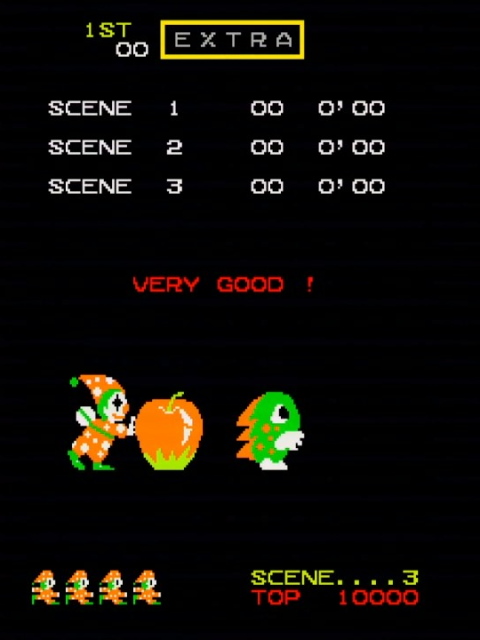 Before we can look upon the acts of evil itself, we must first look at its source: the Mr. Do PCB. It is here where the reality of what this board represents, what it means, starts to show up. 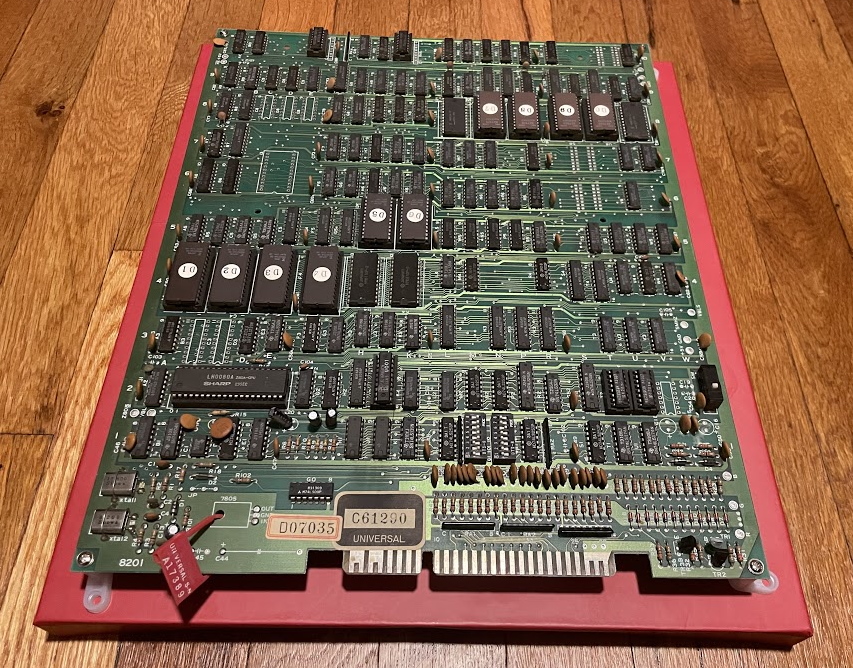 The Mr. Do board connects to its cabinet using an edge connector that looks suspiciously like JAMMA. But JAMMA came out in 1985. Suspicious, that… The edge connector, of course, is not JAMMA at all, and in fact, requires an adapter that includes audio amplification. The bulk of the board is discrete logic, with resistor ladders that are presumably for the video DAC, as they’re labeled R, G, and B. 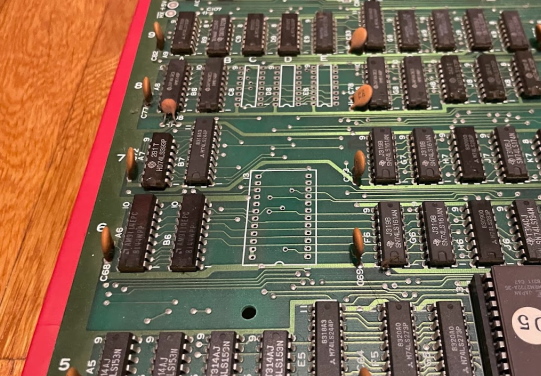 A quadrant of the board is left unpopulated. While this is normal on arcade boards, where capabilities not needed by a particular game were often just left off (why pay for the extra parts?), one can’t help but look upon this particular game having this characteristic as being a bit off. It’s unfinished, and as such, doesn’t it remind you of the unfinished pyramid on the back of the Great Seal of the United States? 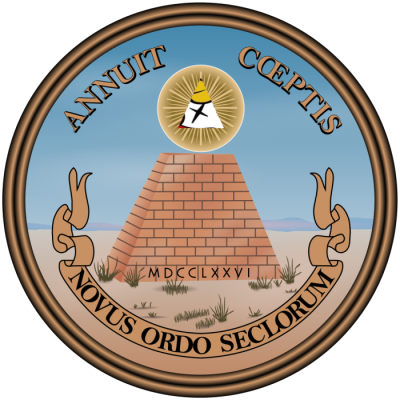 New world order or not, the capabilities of this board are quite impressive. For example, look at this full-screen particle effect, shown across three frames. This is possible because the Mr. Do board can layer multiple tilemaps. 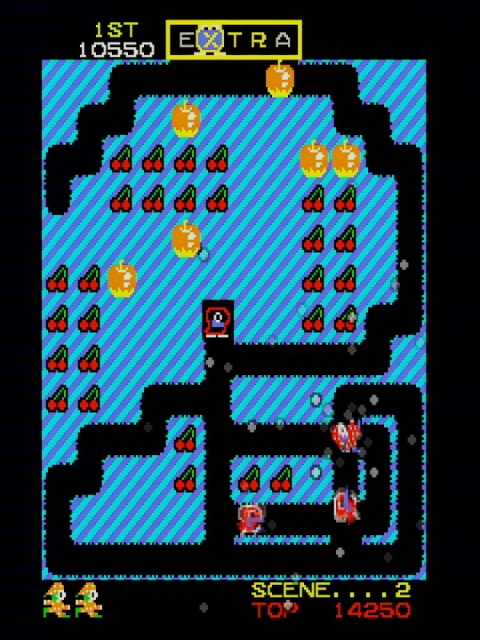 What kind of sinister CPU would power such a board? 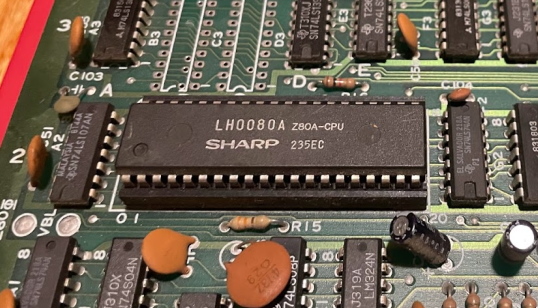 Think about it. The Mr. Do board uses a Z80 chip. Doing some research on the Z80, I learned some things that definitely weren’t taught in my elementary school:

In fact, they didn’t teach anything about the Z80 at all in my elementary school! They didn’t teach about the 6502 either, admittedly, but at least we had an Apple ][plus, which is pretty much a 6502 education in and of itself. Even if it’s just to give the kindergarteners something to play Number Munchers on and not to care so much if they break it. Kids are kids, after all, and I did go to elementary school in the 1990’s.

Speaking of children, and most shockingly of all, Zilog still makes the Z80. It’s even still used in products sold to students. Ask yourself: who benefits from your children getting indoctrinated by this dangerous processor? And are they to blame for the fall of the Austro-Hungarian Empire?! 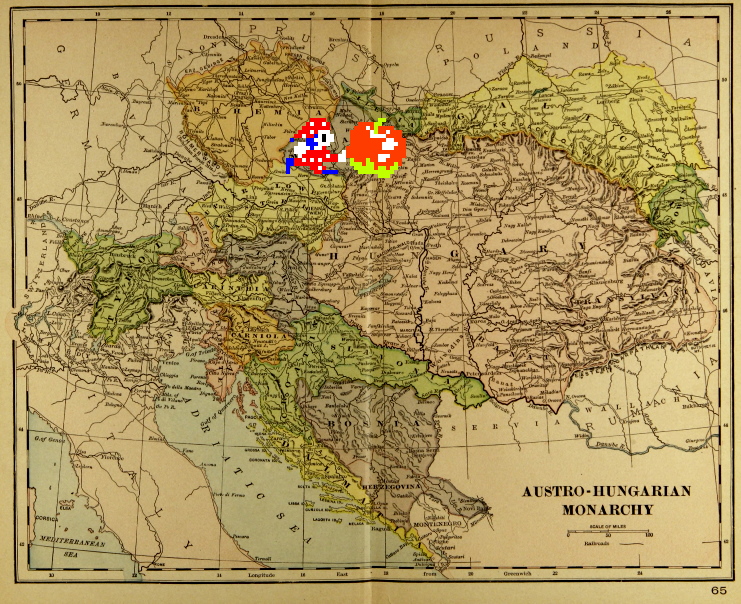 ...wow, I totally forgot this blog post was about Mr. Do for a second there. Sorry about that.

So to summarize, whenever you see a Z80 CPU, you should assume something’s up. But we’ll need to look at Mr. Man’s dossier later. Back to Mr. Do.

Mr. Do appears to be a simple single-screen game like the good old-fashioned American game Dig Dug. But one thing we see in its gameplay echoes the Georgia Guidestones. Mr. Do wishes to help us bring about the New World Order. It does this by presenting the three ways you can beat a level. 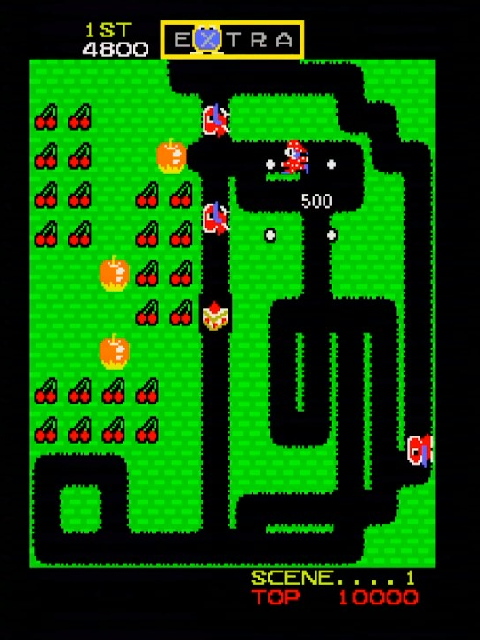 The first is by killing all the enemies, either with Mr. Do’s ball, or with apples. Apples are, of course, the very same fruit that in the Book of Genesis (if you use a Latin pun, anyway) led to the fall of Adam and Eve. This lets us know that this way of finishing a level represents feudalism, when Europe was at its most religious, and was governed by those who were strongest in war.

Notice that this is the only way to complete a level in Dig Dug. The implications are clear– Universal mocks their freedom-loving competition by calling them old-fashioned and feudalist. 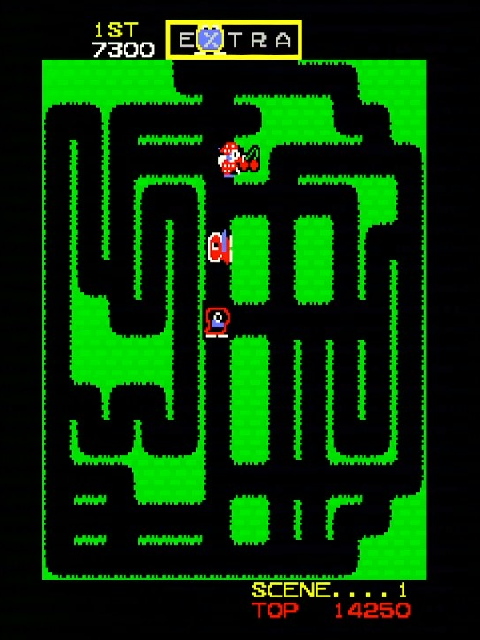 The second way to complete a level is to collect all of the cherries. Collecting all the items in a maze is the only way to beat a level in Pac-Man, and the analogy to consumption is clear. This represents capitalism.

Finally, the superior method is presented: collecting all the letters E-X-T-R-A, by defeating the correct enemies. (The enemies, as it were, of the People) This awards you with an extra Mr. Do, and therefore represents communism, since Mr. Do, with his capability for Action (“doing”), obviously represents the New Soviet Man. 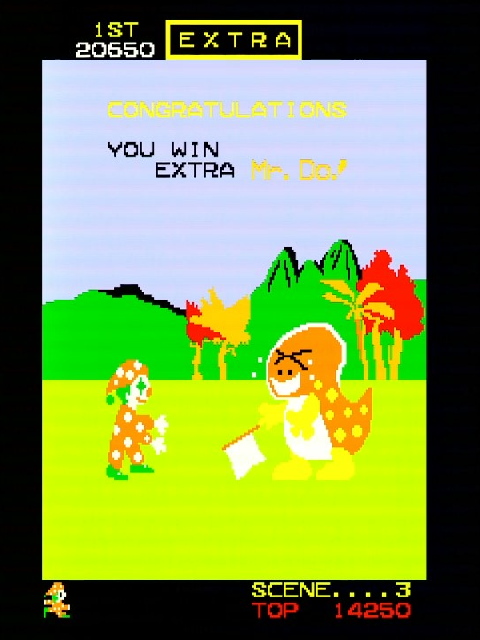 Notice that Mr. Do co-exists with a dinosaur here. Yet in their history books, they tell us that dinosaurs went extinct 65 million years ago, but the classic clown makeup design only began being developed at the beginning of the 1800s. This could never happen… unless the earth is much younger than we thought. And of course, Mr. Do’s world is a flat plane…

If you believe the history books, America at the time of Mr. Do’s release was in a cold war, dominated by capitalist forces like President Reagan, who would never have allowed such obvious communist propaganda to spread throughout American arcades. This means, obviously, that history has been falsified and the 1980s never happened. The earth is much younger than we thought.

Once all the enemies have spread throughout the map, they leave behind a cake. Taking this cake (the vanguard party) causes Mr. Do to take the “red pill”. The enemies he thought he knew stopped, and new enemies (consuming ghosts, a reference to Pac-Man and therefore capitalism, and one of the EXTRA letters) appear. The world turns red; Mr. Do is taking humanity down the path to hell. 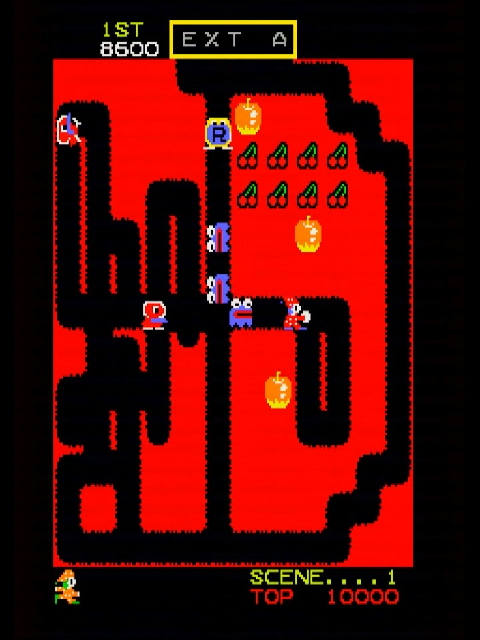 But you might ask yourself, how could Mr. Do, a game from 1982, reference The Matrix, a move from 1999? It’s completely impossible. But yet… Both the Wachowski sisters, who directed and wrote The Matrix, later came out as transgender. It’s often believed that the “red pill” is a reference to premarin, a drug used in female replacement hormone therapy in the 1990s.

And now we look at Neo Mr. Do, the sequel to Mr. Do, released for the Neo Geo in 1997. (Remember, Aruze-Universal would later destroy SNK to prevent this secret from getting out) In this game, there is a powerup that is a pink circle over a cross. Clearly, this is a reference to the ancient Egyptian Ankh, a symbol of life. It’s also visible in Ultima Exodus, which much like The Matrix, features an evil supercomputer. 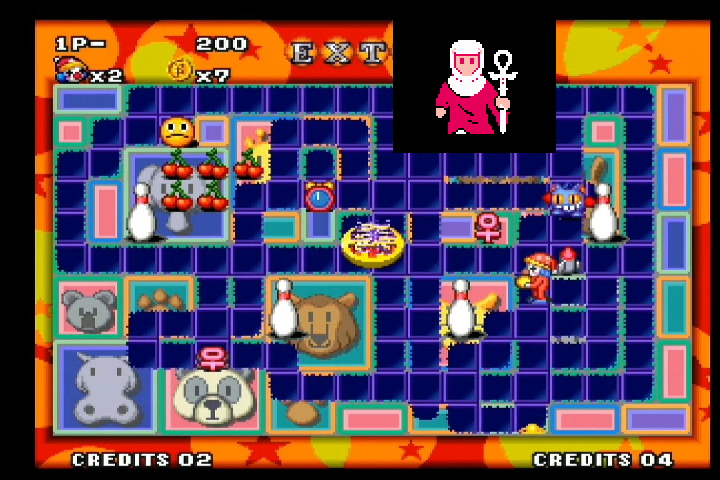 Collecting the Ankh transforms Mr. Do… into Mrs. Do. Well, Ms. Do, since I don’t think our titular clown’s marital status is confirmed in the game. 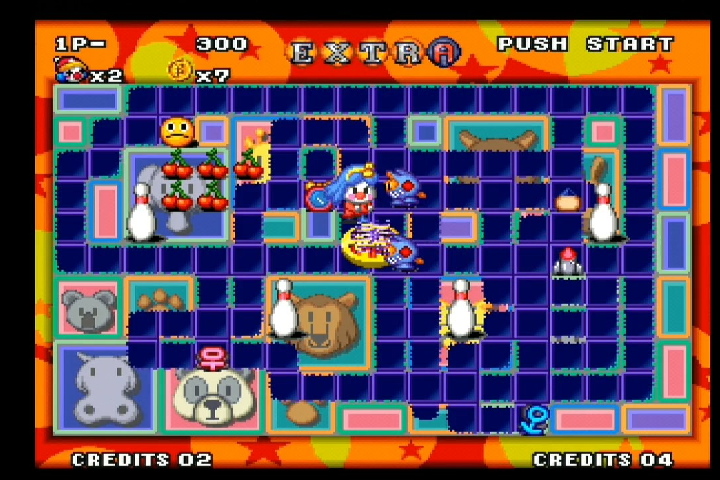 Do I need any more proof that our history has been falsified? Mr. Do is a clown. The purpose of a clown is to make the people laugh and tell jokes. But now the joke is on us. Why would they do this? They know that we could easily find this all out, they left the clues right there, yet Mr. Do smiles instead.

And if the 1980s never happened where did the Z80 come from? It’s enough to make you say 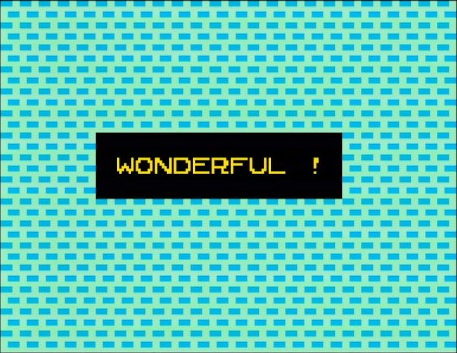