The shift into the 3D era of gaming was one of the most important changeovers in console and arcade gaming: powerful CPUs meant dedicated 2D game hardware was rapidly made unnecessary, but at the same time, the market moved away from 2D entirely: a new era was afoot, the era of the 3D polygonal-based gaming. And one name stands out there: Sony PlayStation, the grey box that broke the Sega/Nintendo stranglehold on the market. And you might wonder: what was happening in arcades? Did the PlayStation make a splash there too?

A major casualty of the 3D era was the decline in the number of companies making graphics hardware. The arcade game companies were particularly hard-hit by this; including Japanese arcade giant Namco. Namco did make a number of in-house 3D arcade games in the 1990s, but all of these systems were fairly complex and expensive, suitable only for the high end of the market– in terms of market positioning, perhaps most comparable to the Hyper Neo Geo. But for the mass market, what did Namco have? Without a home console arm, how could they compete with Sega’s mid-market Saturn-based ST-V cartridge system? 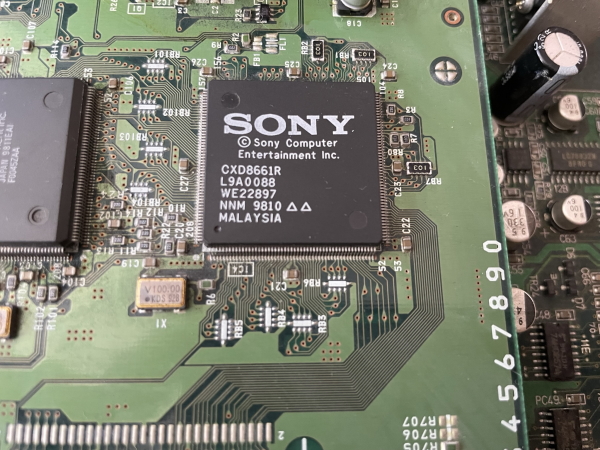 Enter Sony. Their PlayStation console was hitting the market by storm, but that didn’t mean they were adverse to sharing the tech in the arcades. Here we see the CXD8661R, an upgraded version of the MIPS-based PlayStation CPU. It would form the core of Namco’s new mass-market hardware: the System 12. 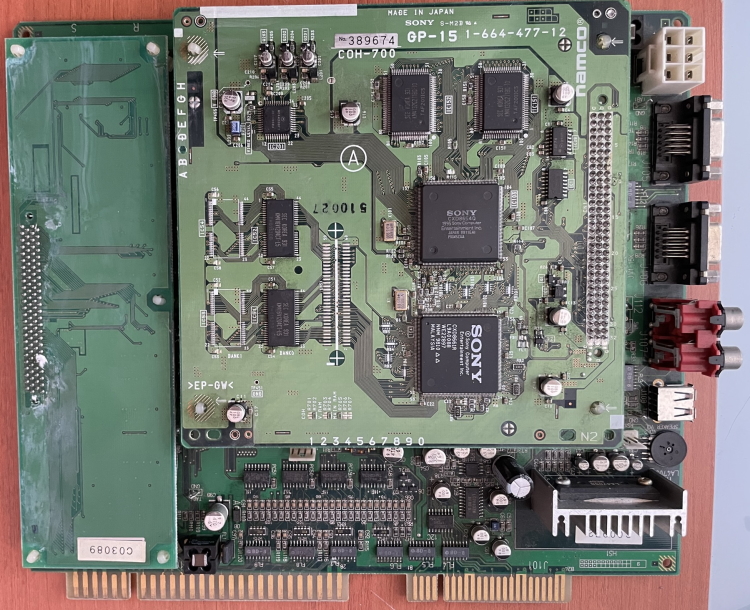 Let’s take a look at the specs.

As you can see, the System 12 is a modest upgrade, adding a faster CPU and additional video RAM, as well as custom Namco sound hardware. It’s also worth noting that unlike the ST-V, the Namco System 12 is not designed to have games swapped out.

It’s worth noting too that this Sony collaboration was not exclusive. Sony didn’t have their own arcade arm, but they licensed their PlayStation-based technology widely; the CXD8661R would find its way to Capcom’s arm with their ZN2 system, used to power 3D games like Street Fighter EX2.

Another thing that changed in arcades over the course of the 1990s was the decline of the venerable JAMMA standard. Now, JAMMA systems survived well into the 2000s; see the PolyGame Master series for an example. But the technology had a number of major limitations.

The way around this was various extensions of JAMMA, either by repurposing pins, or adding additional connectors. But this could only take you so far, and it meant increasingly, the JAMMA standard was no longer as “standard” as it seemed. You couldn’t convert a Street Fighter 2 cabinet to an ST-V based Groove On Fight without rewiring– they used incompatible kick harnesses for additional buttons. And at the same time, sit-down “candy cabs”, designed to quickly swap out games without repainting and rebranding, were becoming the standard in Japanese arcades.

And that’s why the System 12 has so many connectors on the side. In 1996, the Japan Amusement Machinery Manufacturing Association (JAMMA, what did you think it meant?) put out the new JAMMA Video Standard, or JVS. The System 12 boards were designed to be compatible with both.

JVS uses a series of connectors; video, for example, is now sent through an “HD15” connector similar to VGA. (Though like the Atomiswave’s VGA connector, sync is usually combined, so this isn’t VGA-compatible) Of course on the Namco System 12, they’re just on an exposed circuitboard, but in the future, this makes the boards much easier to enclose. But that’s not the only change; the biggest change is philosophical: in JVS, the arcade cabinet has to do a lot more work. Audio is no longer amplified, and is output on stereo RCA jacks. And the biggest change of all is that USB port.

See, JVS was designed to be future-proof. Rather than just expand JAMMA to six buttons and call it a day, they wanted a connector that would be suitable for everything, from driving games to eight-button games to whatever unknown things might be created in the future. So the concept of a “JVS IO board” was created; a smart intermediary that would handle all peripherals. And that’s what the USB connector is used for.

Unfortunately, it seems USB 1.0 was not acceptable to the JVS committee, so while this uses USB connectors, it uses a completely different protocol based on RS-485. This is pretty annoying! Don’t have USB ports that aren’t USB! But that’s the decision they made, and we’re stuck with it. Modern PC-based arcade hardware like the Taito Type X series and Exa-Arcadia continue to use JVS to this day.

I was hoping to do a mixed setup, using both the video and stereo audio from the JVS ports, while powering and getting controls from my usual Axunworks Supergun Mini over JAMMA. However, the Framemeister did not like the video from the VGA port. It’s worth noting that to get video out of the VGA port, it needs to be plugged in when you power on the board. 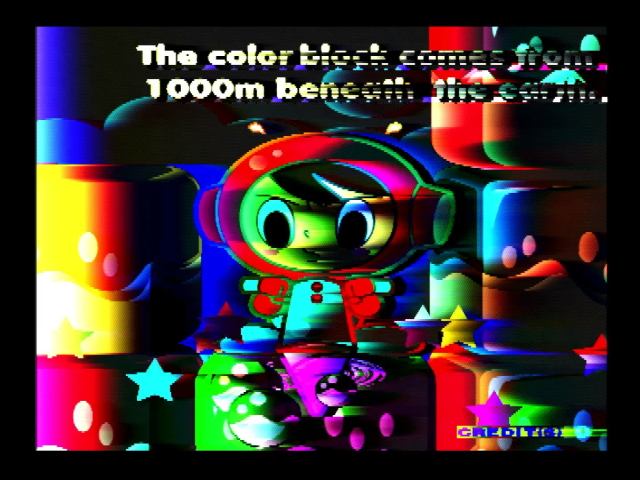 Over the JAMMA edge connector, video was nice and crisp. Note that this particular board set offers options for interlaced and non-interlaced, but it’s always 15kHz. Some JVS boards offer higher resolutions, but not this one. (Though it does offer separated sync in the settings, which might be nice for some people, but you can only choose that option with a JVS IO board plugged in) For the game in question, I don’t think interlacing or not makes a huge difference. 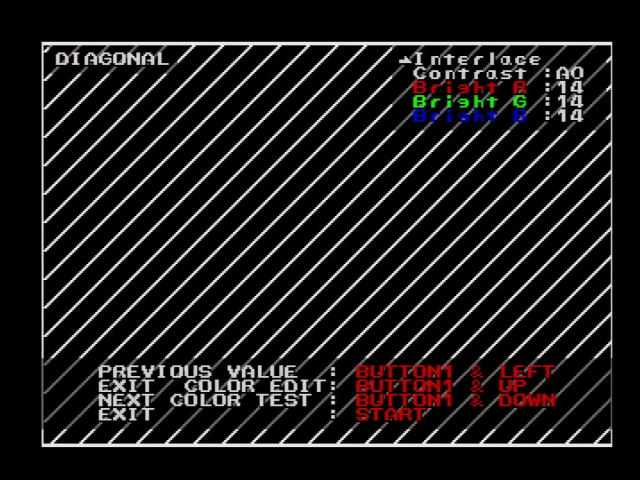 You see, yet again I’ve chosen to demonstrate a 3D arcade platform using a 2D game. 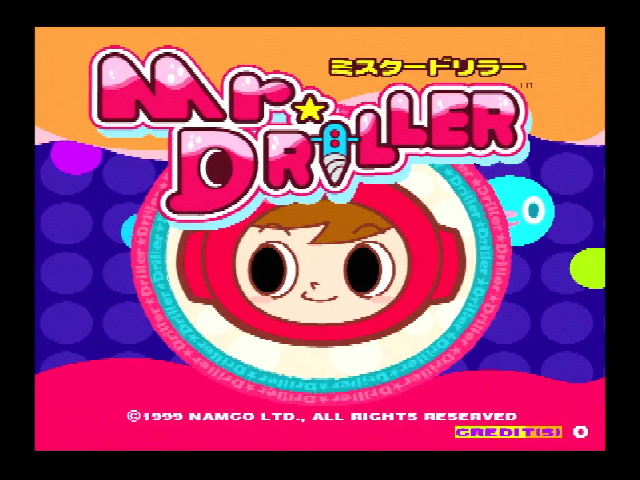 Mr. Driller is a quintessential arcade game. It’s definitely a favorite of mine; you dig deeper and deeper in a grid of colored blocks. Each dig action destroys all blocks of the same color as it that are touching it, and causes the blocks around it to fall. When five blocks touch each other after falling, they disappear, so there are chain reactions. You want to get as deep as possible as quickly as possible, as you also have an air meter, but your character will die if a block falls on him. Easy to learn and challenging to master. 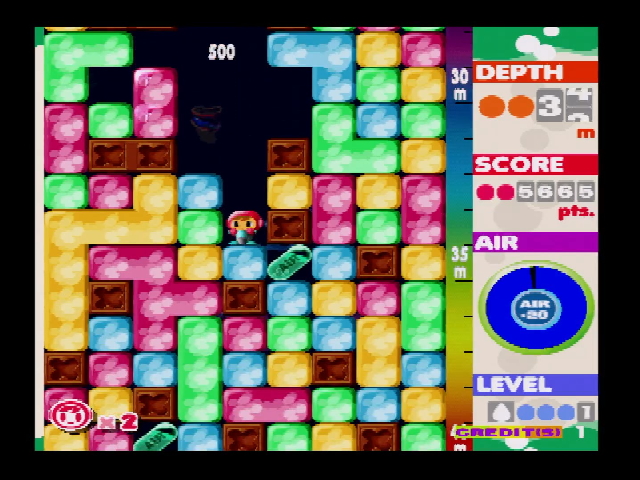 But I’ll be honest here: unless you specifically want to play it on a cabinet, there’s very little reason to play the System 12 version. There was a release on the PlayStation, and it’s pretty much equivalent. These are captured from a PlayStation 2; I’m using the Japanese release to match the Japanese arcade board, but it did get a western release as well. 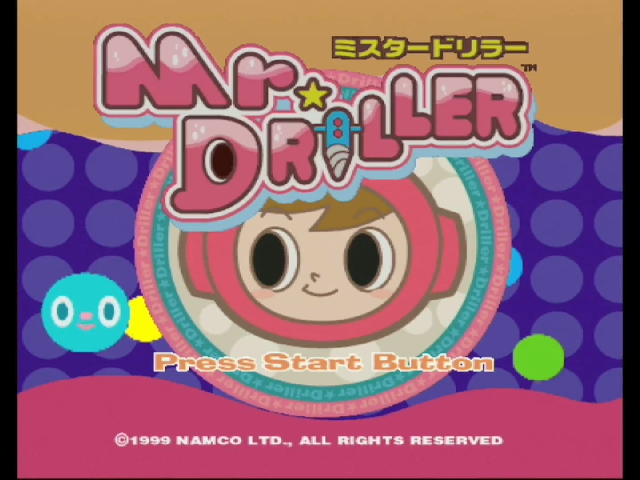 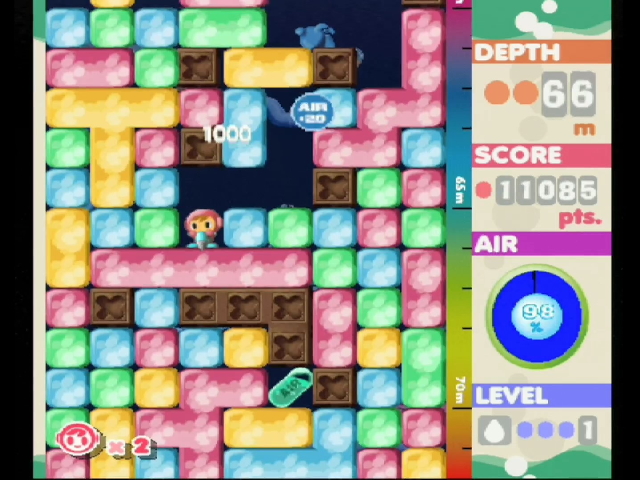 You might wonder if the more muted colors are a result of me having a bad setting. So I ran Mr. Driller in MAME. It looks like the brighter more contrasting colors are expected on the arcade version. (Also, notice that the circle around Susumu is a perfect circle with a 1:1 pixel ratio, even though no system it ran on has square pixels!) 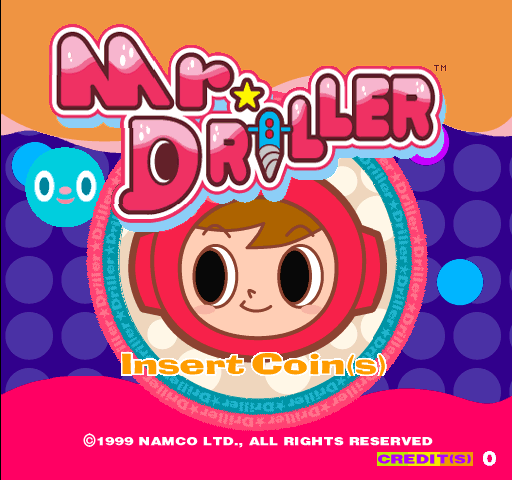 In any case, this particular game is simple enough that there’s no real reason it couldn’t be played on, say, the SNES. Namco just didn’t release it until 1999.

The Namco System 12 was used for 3D games as well, like the arcade release of Tekken 3 and Tekken Tag Team Tournament. Despite the numbers, it was followed by the PlayStation-based System 10, which is actually less distinct from a PlayStation, and also doesn’t feature JVS. I swear it came out later– it was used for the sequel to Mr. Driller, Mr. Driller 2. (As well as Mr. Driller G) 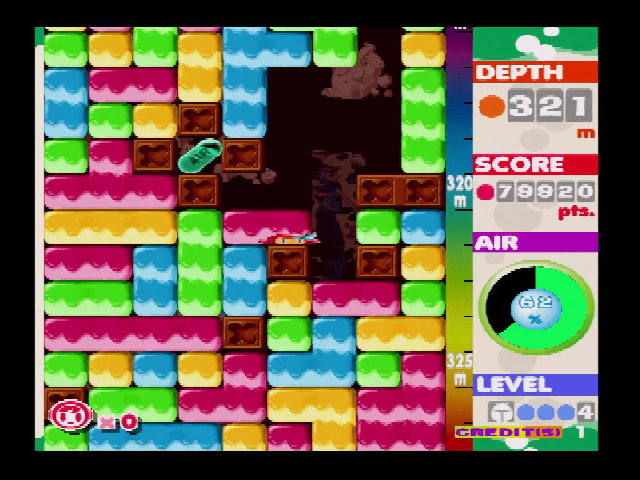 Namco continued to use arcade boards based on PlayStation hardware for quite some time; for example, the later System 357, used by games like the 2008 Tekken 6, is based on the PlayStation 3. And of course, today everything is PC-based, even the PlayStations.