Sears, Roebuck & Co. A name that will surely echo throughout American business forever; of course, such a storied department store chain would dip its toe into the video game market, and we all know of Sears Tele-Games, their rebranded Atari line. But now Atari, despite their new Video Computer System, has released a new standalone console, and Sears has dutifully followed. Why is Atari having regrets?

This blog post was due to be published in 1978. However, due to Nicole not being born yet at the time, or even her parents having met, it was shelved. We now republish it today. Close enough. 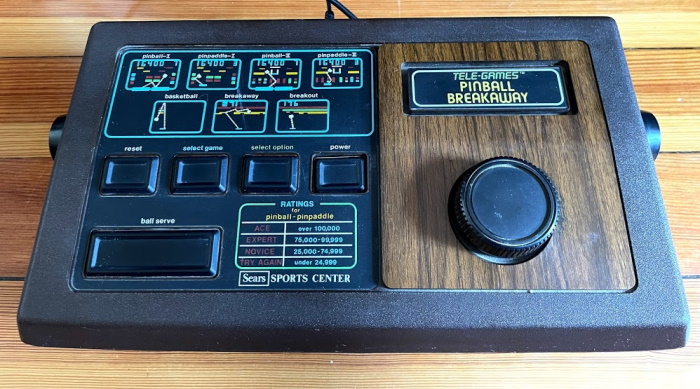 Didn’t you think you saw the last of these? With Atari pushing their clone of Fairchild’s Channel F so heavily, you’d think they’d leave the dedicated consoles to johnny-come-latelies like the Connecticut Leather Company. I mean, when even tiny Japanese playing card companies with names like “Heavenly Luck Temple” are making Pong clones, you know the market’s saturated. Aren’t dedicated consoles dead, and shouldn’t we all be playing “game programs” from “videocarts”? 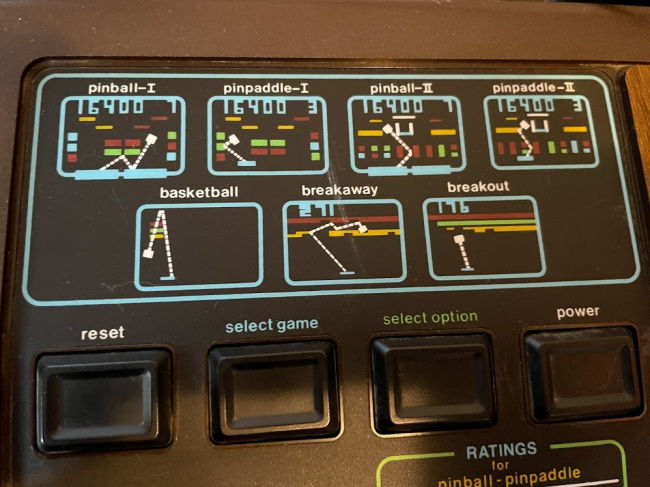 But look closer. This game is pinball: neither Fairchild or Atari have been able to bring a pinball game to their consoles, and it’s likely that the underpowered microcontroller systems just aren’t up to the task. Pinball, after all, is a wholly analog experience, with physics determined by the motion of a real ball on a real table, propelled along by solenoids and gravity.

Rumor has it Mattel Electronics (yes, the people who make those football handhelds) is planning a 16-bit interchangeable cartridge system; maybe that will finally be up to the task. Now, Fairchild says they have a pinball videocart, but it’s actually just Breakout. This system’s got Breakout too, but that’s probably just a matter of obligation.

And we’ve got proper Pinball controls too, with buttons on either side of the beefy Tele-Games system, and a timeless woodgrain look that will never become dated. It’s got a beefy paddle and a ball serve button that, by the way, takes some real effort to press. They put an extra tactile spring underneath it.

Just like its interchangeable-cartridge-cousin, Tele-Games Pinball Breakaway has the highest-quality video output on any game console today: that’s right, color RF. No need for clumsy color overlays to stick onto your TV here, just hook up the included RF switchbox to your TV’s antenna leads. If you live in some strange middle-of-nowhere place without analog TV signals, you can use a simple adapter and avoid the switch.

But there is a problem. I’d like to have a broadcast-quality composite signal for high quality video capture. But for that, we’ll need to turn to America’s newest friend, the People’s Republic of China. I know we don’t recognize them yet, but I’m sure we’ll get around to that soon enough. 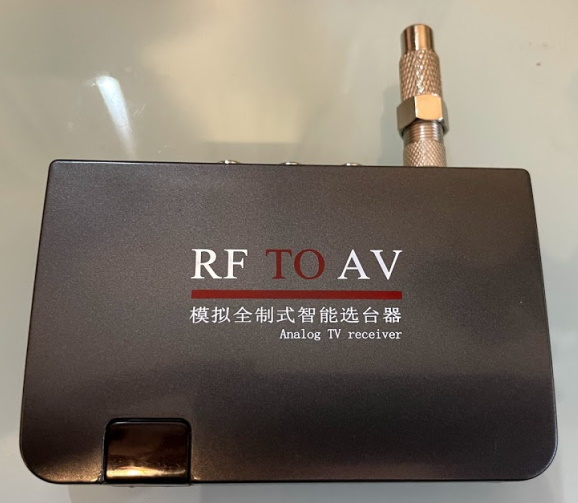 Yep, this AV2RF box has what are the innards of your tube television, or if you’re some kind of millionaire, your Betamax player. It takes in a signal and converts it to an AV signal I can capture. It even uses an infrared receiver, like a real high-end Zenith! Of course, since it is from China and they use different plugs, I need a whole bunch of adapters sticking out the back. 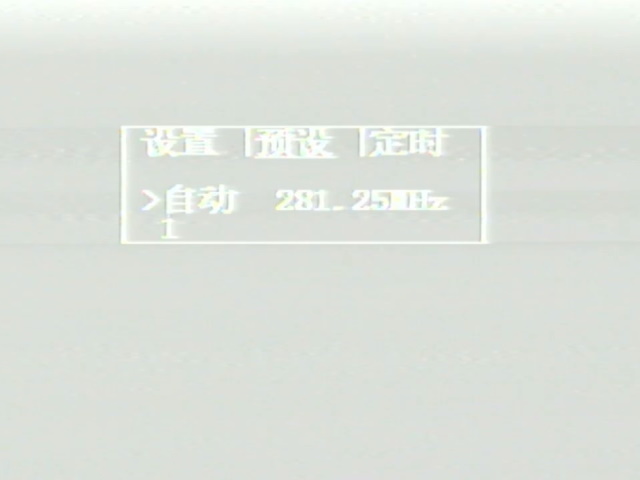 The video output quality of the device menus might leave something to be desired, as it’s extremely washed out, and of course, all the menus are in simplified Chinese. Thankfully, it’s not nearly this unreadable once we actually get to the game.

The state of Computer Pinball 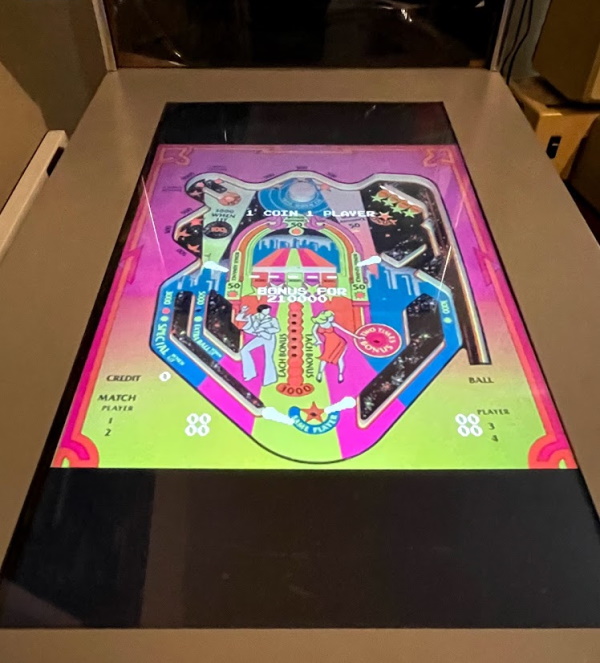 You might wonder how Tele-Games Pinball Breakaway compares to Atari Video Pinball, their latest arcade hit. But let’s be clear here, you’re not going to get something like this, for two reasons: 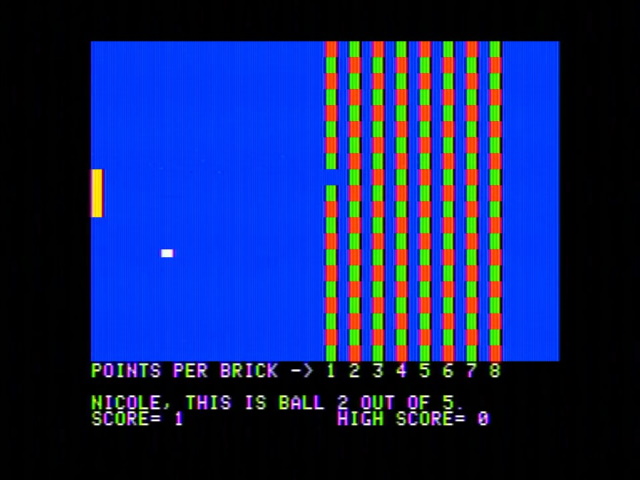 The vertical monitor is the real issue here; every pinball machine I’ve seen has been vertically oriented. On the Apple ][, which can’t be a plus model because that doesn’t exist, Steve Wozniak solved that for his port of Breakout by putting the whole game on its side. It’d be pretty weird to play pinball like that. So how did Atari solve the same problem?

Ultimately, we need to play the game

The first game we see on this device is pinball-I. It has fewer targets than the other table, pinball-II; giving us two tables is pretty generous; having the ability to switch tables with only software is really the main advantage of a digital pinball over a real one. 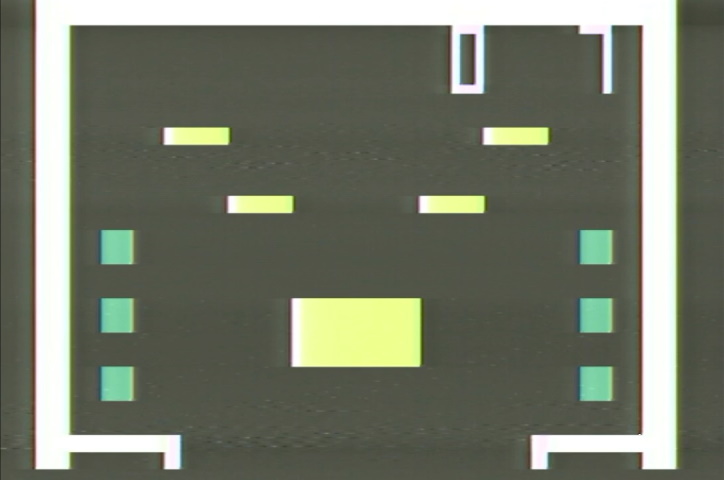 pinball-I shows that we are in fact using a horizontal board, with the exit at the bottom, and colored targets throughout. But Atari’s wisely gone for a dramatic changeup of some old-school pinball standbys. There are no outlanes for you to lose the ball in, and the gap between paddles appears huge. 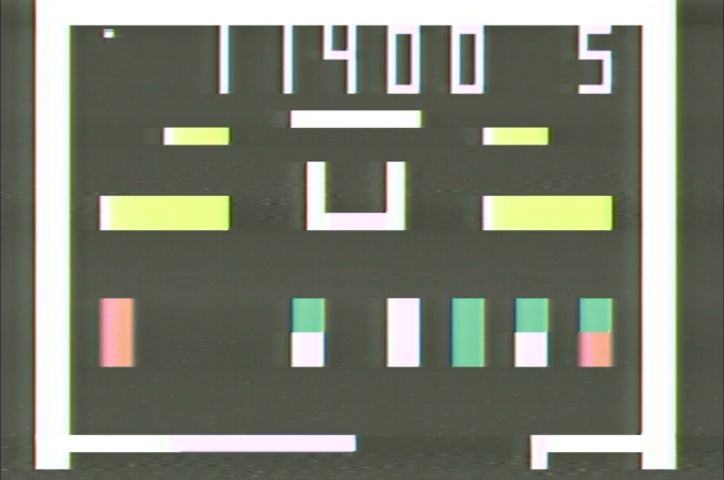 That’s because the paddles themselves are huge, too. This is actually a very smart move; the larger paddles without outflows make the game feel much more fair, as a home pinball game has no need to steal your quarters. Instead, this is a pure score challenge. Tele-Games Pinball Breakaway is an entirely one-player challenge, which is useful if you’ve holed yourself up due to concern about the “Russian flu”.

There are actual ball physics at play too, with fluid motion and curves; and if you choose to play the pinpaddle games that use a Breakout paddle instead, the ball plays more like the angled paths you’d expect from that game. 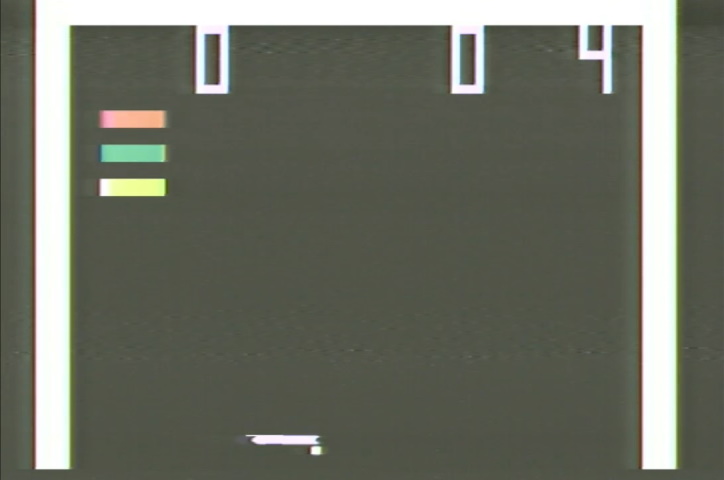 You can also play basketball if you want. This involves using the “ball serve” button as your shoot button; it’s pretty challenging. 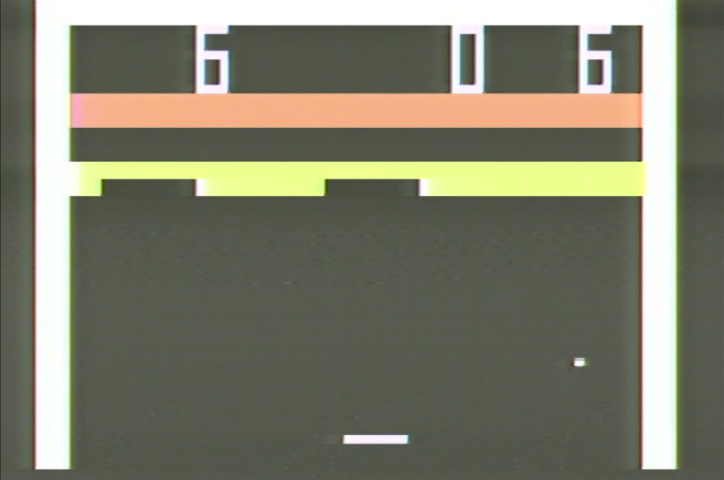 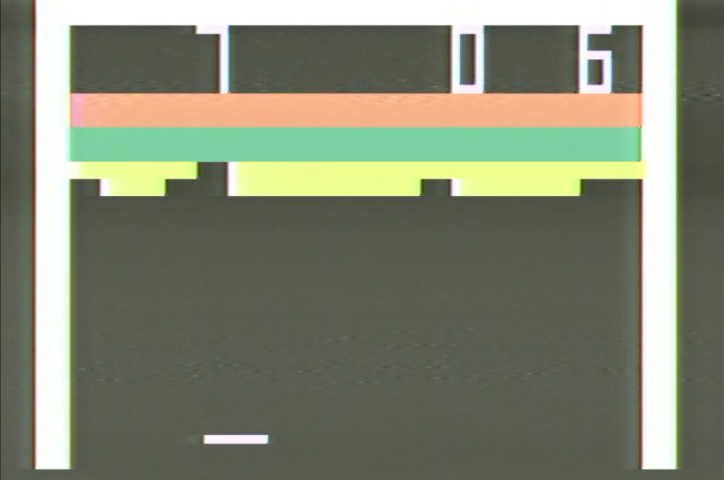 breakout and breakaway are both here too. They’re not the star of the show, but unlike Wozniak’s port, the paddle is at the bottom of the screen. See, it is possible, even with a horizontal orientation! 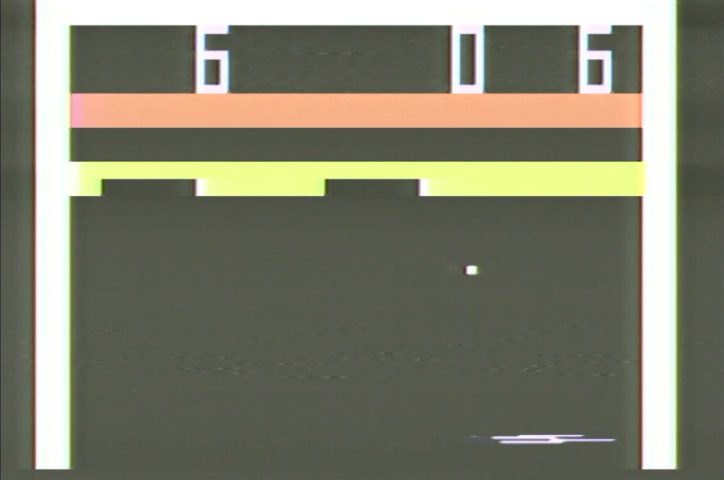 Like many paddle games, as you move the paddle, its shape is distorted while it moves. My guess is that the game is constantly registering the potentiometer’s position, and maybe it hasn’t stabilized. Or maybe it’s just dirty.

So, this plays a decent game of pinball, and some other obligatory paddle games, but don’t we all just want to see what’s inside? The outer case is held together by six Phillips-head screws. 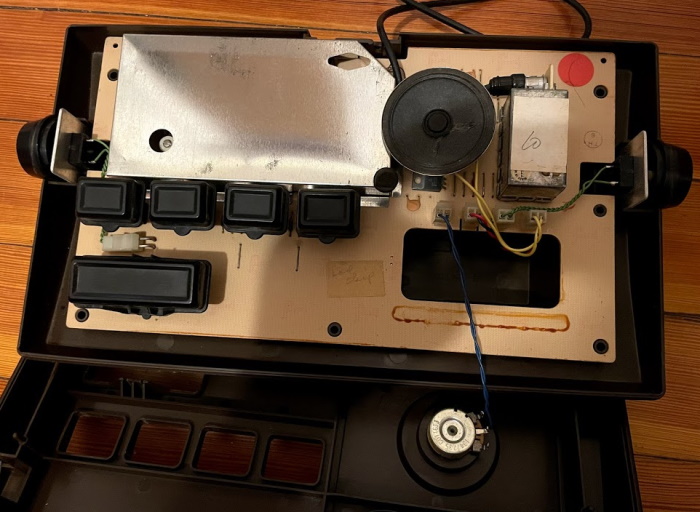 Everything inside, including the buttons, the battery compartment, and the mono speaker, are easily removeable and socketed; even the RF shield is just held together by tabs that can be removed without a soldering iron.

The RF cable, which appears permanently attached on the outside, even has a detachable cable on the inside, using a phono plug like at the other end. It’s possible that the input of the modulator could be used to extract the composite video without need of the RF2AV box.

But what’s under the RF shield? 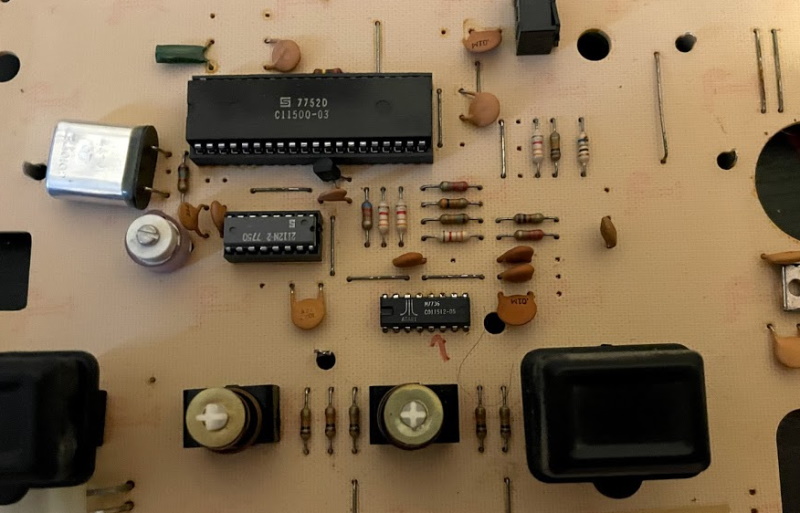 This is a pretty simple machine inside; a large socketed chip, two smaller chips, and some passives.

Since this is a single-sided board, all the traces are on the back. 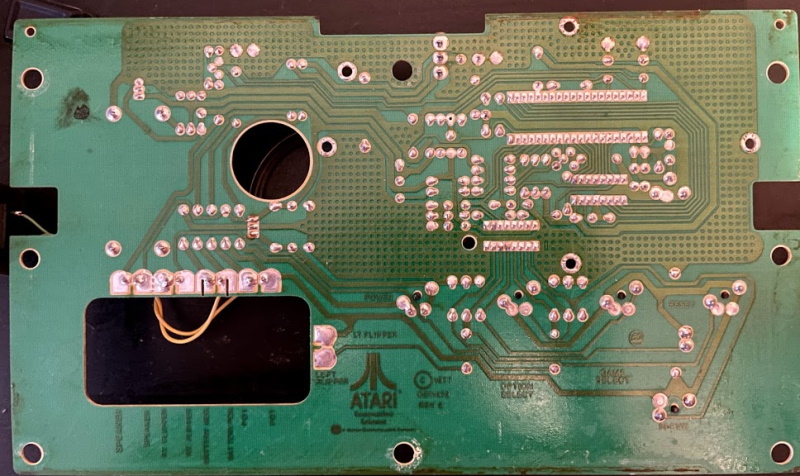 It looks like the smaller Atari chip goes out to the buttons and controls; perhaps it handles things like input matrixing? Since it isn’t socketed and everything else is, I assume this may imply it’s a relatively simple chip without complex logic. While the larger chip is speculated to be a microcontroller of some sort; while there is RAM, there is no separate ROM.

128 bytes of RAM is pretty interesting; it’s the same amount of RAM as the cartridge-based Video Computer System. However, the CX2600 uses a “RIOT” chip, which combines RAM with I/O and a timer, while this Signetics chip is just a static RAM. Perhaps the small Atari chip handles those functions.

Overall, while this is a pretty simple circuitboard, it is a bit more complex than your typical single-chip Pong clone.

This is a pretty nice machine, with its comfortable side-buttons and hefty paddle. Still, it can’t help but feel like the end of an era. With a microcontroller and RAM, this isn’t really any simpler than a multi-game console. Imagine if Atari had released a “Pinball” controller with two buttons and a pinball game on cartridge. Maybe the Video Computer System can’t do it, but their upcoming computer should definitely be able to.

I do hope they make the standalone pinball controller, though. Can you imagine having to hold one paddle in each hand, or even worse, moving left and right on the joystick to mean the buttons?