Last year, I wrote up an article on the Alpha 68k arcade platform. A complex system made primarily with discrete logic by the Alpha Denshi Corporation, it would eventually become the basis of the Neo Geo. There was one game, though, that I really wanted to talk about and couldn’t. The highest development of the Alpha 68k system before it united with SNK. I didn’t have it then– now I do. Let the Gang Wars begin!

Review: this will be on the test

Alpha Denshi, later known as ADK, was an arcade game and hardware developer who, in the late 1980’s, formed a quite close-knit partnership with SNK. They were also early adopters of the 68000 in the arcade space, using it as early as 1984 with their Equites hardware, when they were still working with Sega. (Interestingly, the Equites hardware uses an 8085 as a sound CPU rather than a Z80. That’s definitely a board series I’d like to check out at some point, especially Splendor Blast, but they’re rather uncommon)

But enough about that! What we looked at in particular was Sky Soldiers, a 1988 game, which used a later Motorola 68000-based board called “ALPHA-68K96II”. 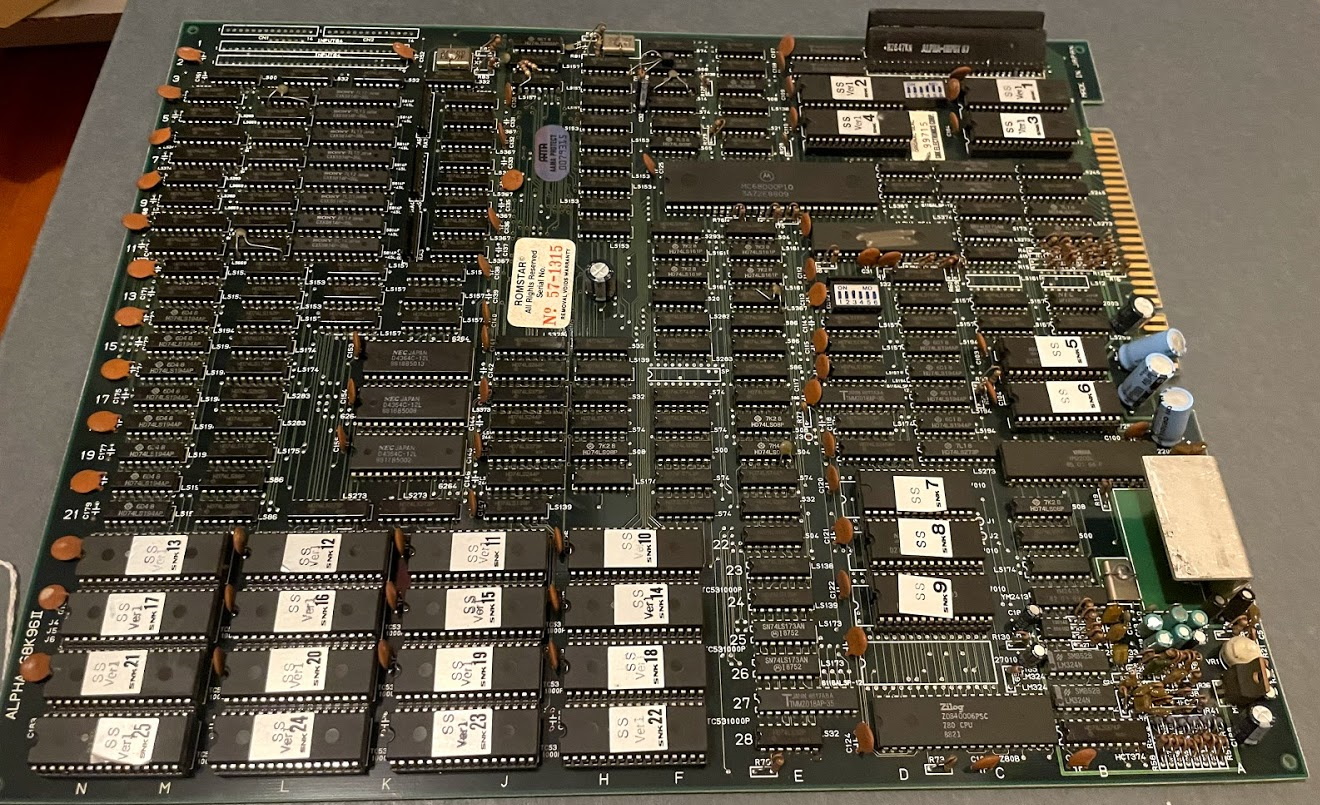 What’s interesting here is not just the game, but the fact that this is a direct predecessor to the famous 1990 Neo Geo hardware. It can’t scale sprites and has a lower horizontal resolution (actually vertical resolution, as Sky Soldiers is a tate mode game), and more limited color palettes and a less capable Yamaha FM synth, but all the core elements are there. Another thing about it is that almost all of the hardware, including the video circuitry, is implemented in discrete logic. 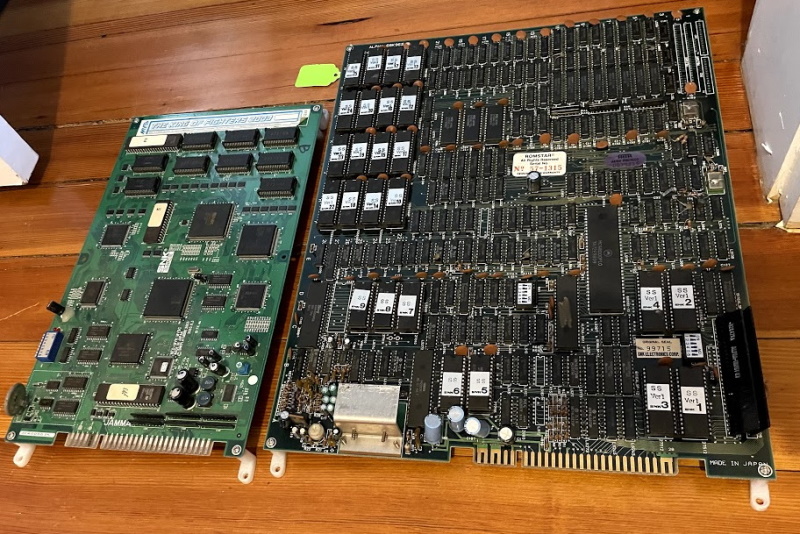 As such, these boards were quite big. By the time of the 2003 Neo Geo single-game PCBs, all of that discrete logic had been consolidated down into dedicated chips; Neo Geo sales numbers were high enough to justify this. And therefore, the boards shrunk a lot.

While there was a lot of time between 1988 and 2003, the Neo Geo hardware didn’t change much then. (After all, that’s… kind of the point of a cartridge system) But single-game systems like the Alpha 68K could change, and did. Let’s talk Gang Wars.

ALPHA68K96V seems to be the PCB code of the last variant of the Alpha-68k family of circuitboards, and is used by the 1989 releases Super Champion Baseball, Sky Adventure, and of course, Gang Wars. It’s a modest improvement over the ALPHA68K96II board, as you can see looking at them side by side. 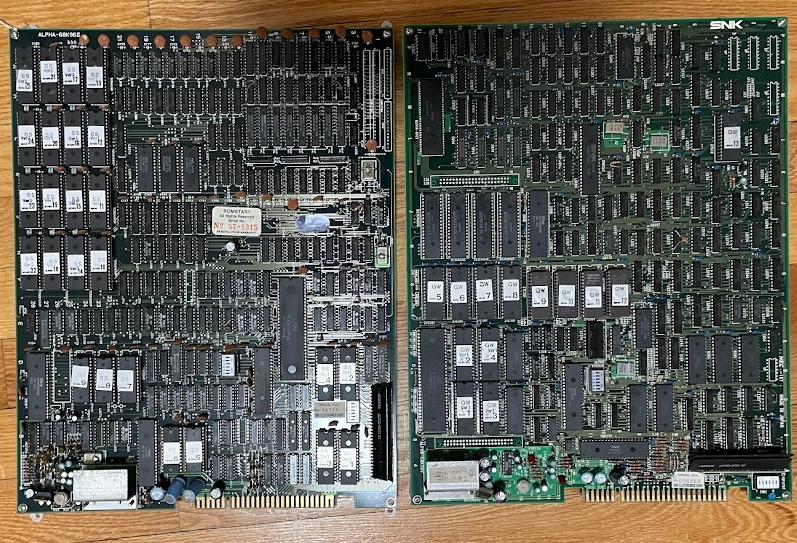 The Gang Wars board is, to my eyes, a bit less crowded than Sky Soldiers. This is because the movement to custom chips has begun. For example, this SNK-branded CLK IC provides video timing signals, and is likely a predecessor to the NEO-D0 multi-purpose chip used on many Neo Geo boards. 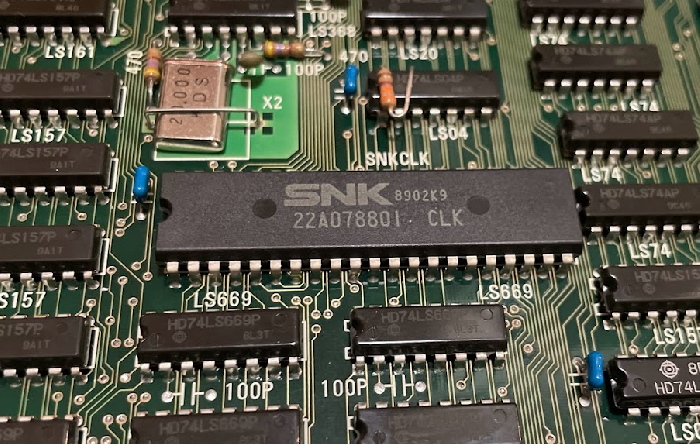 Another noteworthy chip is ALPHA-8921; this reads in the sprite data and “serializes” it, preparing it for output to the chips, and was later known as PRO-CT0. An interesting aside is that one key difference between AES and MVS cartridges is that the AES cartridges have the ALPHA-8921 functionality on the cartridge, while MVSes have it on the board. This makes it extremely difficult to use AES games on MVS systems; just as planned. (Back in the 90’s, AES carts were the cheaper option) Here, it hangs out near the line buffer RAM. 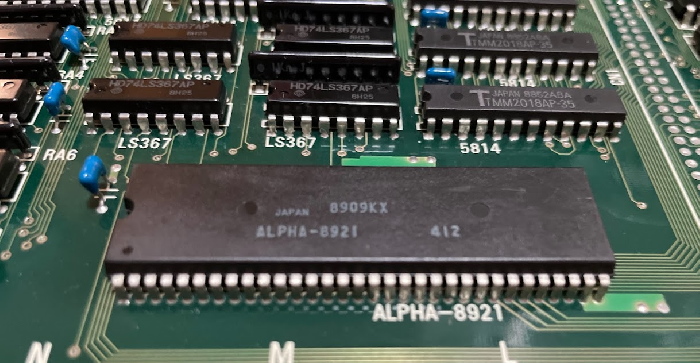 Finally, a small “chip” (like some of the Alpha68k custom chips we’ve seen before, this one is just a small circuitboard covered in material and attached as a single-inline package) that didn’t make it onto the Neo Geo: the ALPHA-VOICE88. This is an 8-bit 8MHz DAC used for sound effect playback, since the YM2203 FM synthesizer used here doesn’t have sampling capability. The Neo Geo’s YM2610 has that functionality built-in, so it’s not needed on that system. 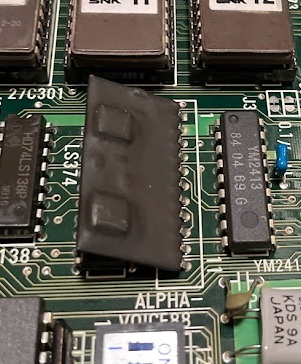 While ALPHA-VOICE88 doesn’t exist on my Sky Soldiers board, System16 does report it as having an 8-bit DAC. It’s possible that its functionality was integrated into the board on the revision I have; these things often changed around a lot. 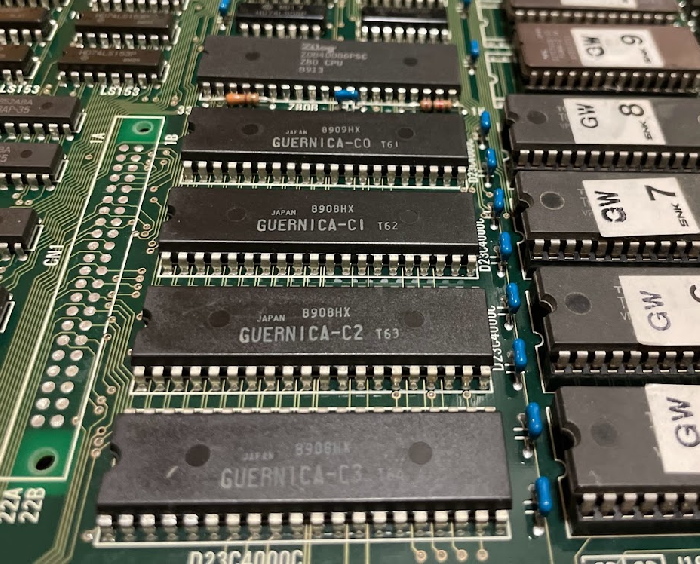 The board also has a series of four chips labeled GUERNICA. What’s the deal with that, you might wonder? Actually, these are just ROM chips. Guernica seems to have either been a codename for the game in development or a team at Alpha Denshi; the game gives a shoutout to “TEAM GUERNICA” at the end of the credits. 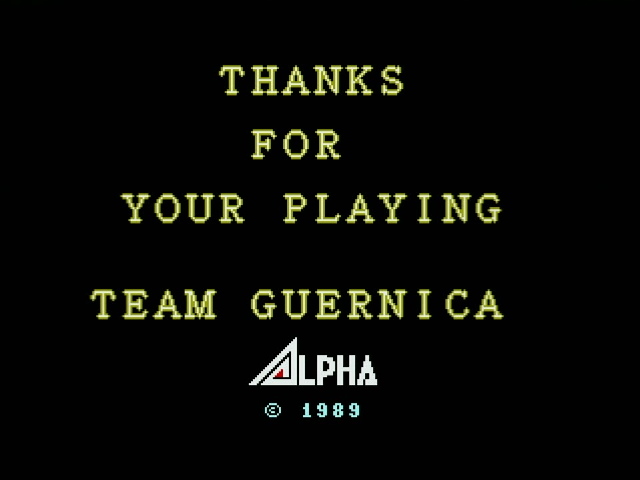 So, Alpha68k-V is about exactly where we’d expect: the midpoint between Alpha68k-II and the Neo Geo. What did that hardware produce, and how does it compare to what ADK would do with their upgraded hardware? 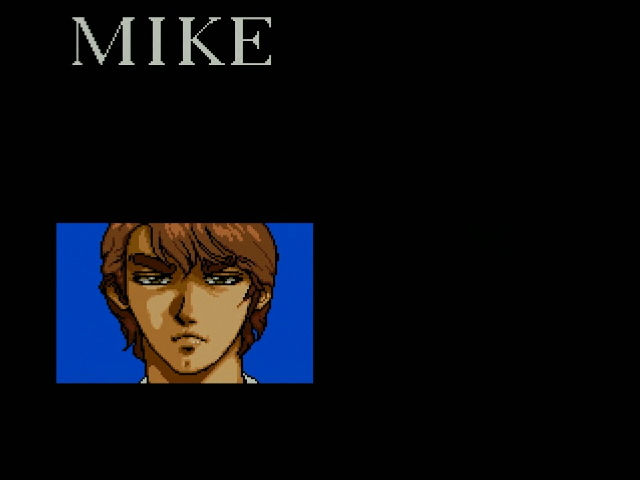 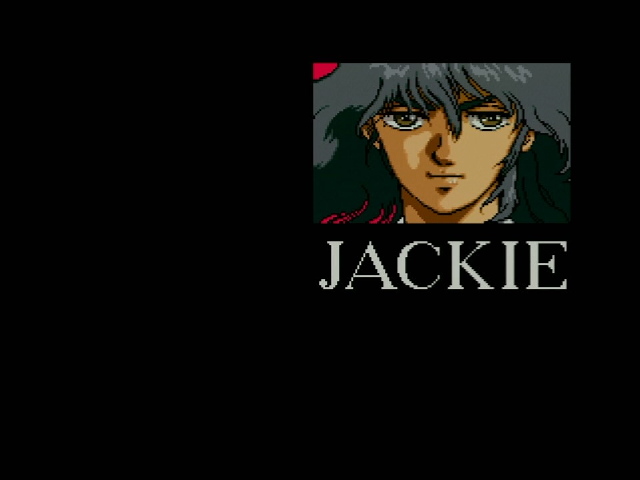 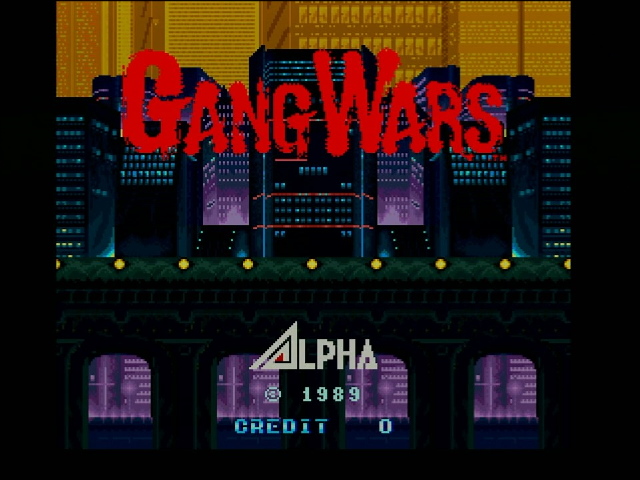 Gang Wars starts strong with a dramatic opening, and then a pan to the city where its very colorful title screen awaits. Unfortunately, this might be the strongest part of the game– though for an arcade game, this is the part that would determine whether you would put in your quarter or not. 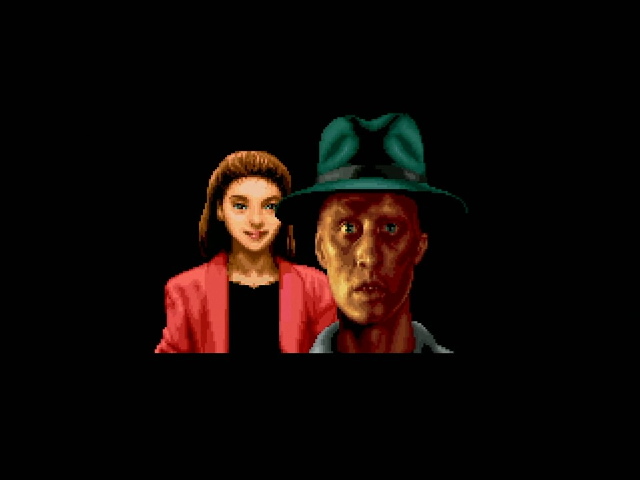 The story in Gang Wars is told with these impressively shaded cutscenes, and it’s really just as nonsense as you’d expect from a late 80’s beat-em-up. The story starts by telling us it’s 1989, it’s New York, and a Little Girl Was Taken Away By Someone Unknown. And well, if the game isn’t going to bother to remember people’s names why should I? The Someone Unknown is Jaguar, who wears a classy green fedora and seems to be some kind of local crime lord or something. 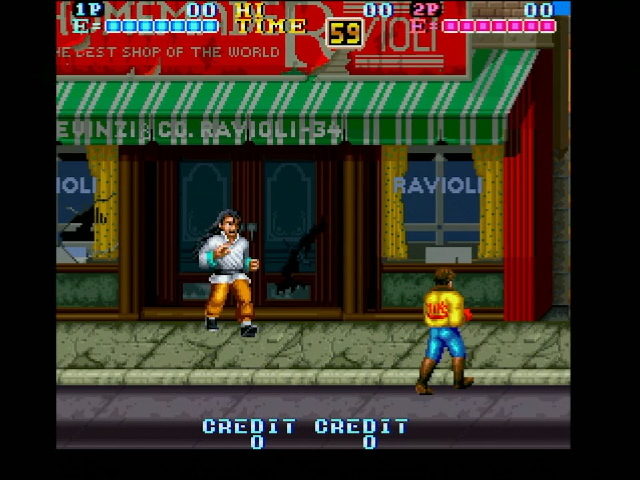 To save the Little Girl, we have our heroes, Mike and Jackie. Jackie’s only controllable with the Player 2 controls, and is the one with long hair. Mike, our Player 1, has a yellow jacket with his name written on the back of it, because otherwise he’d forget it. Because I’m the oldest sibling, I get to play player 1.

That’s one thing I would like to point out; side-scrolling beat ‘em ups like this are always more fun when you have multiple players at once. I played through the game, but I did it by myself. So of course, that’s going to impact how I enjoyed it. 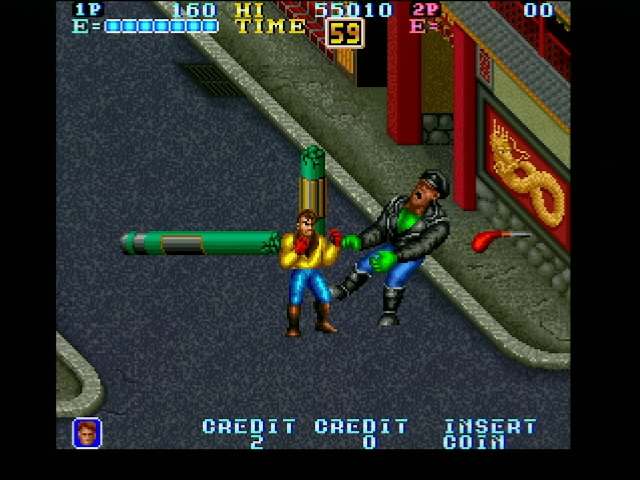 So let’s start with the good things. The game looks great; its New York City streets are vibrant and colorful, and the level background have a lot of variety. The art style will definitely look familiar if you’ve played ADK games on the Neo Geo like World Heroes and Aggressors of Dark Kombat, and that’s not a bad thing– the ADK in-house style has aged pretty well. 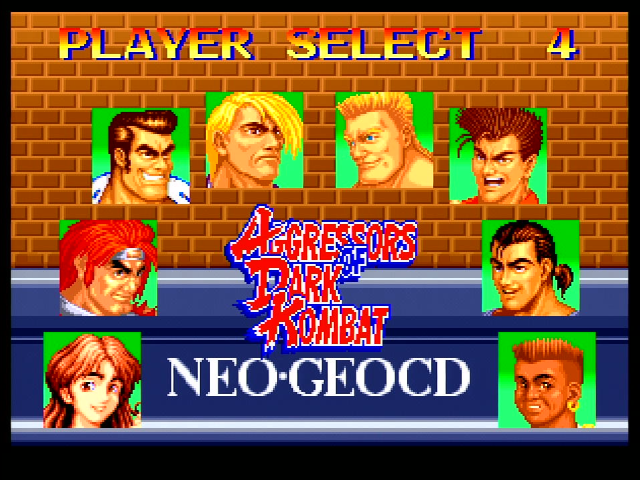 The game also has some nice touches. For example, an enemy on the verge of being defeated will go into a stumbling pose after getting up but before they start attacking. Hit them while they’re in that pose and Mike will do a unique finishing move. It looks like a DDT, but I’m not an expert in wrestling. 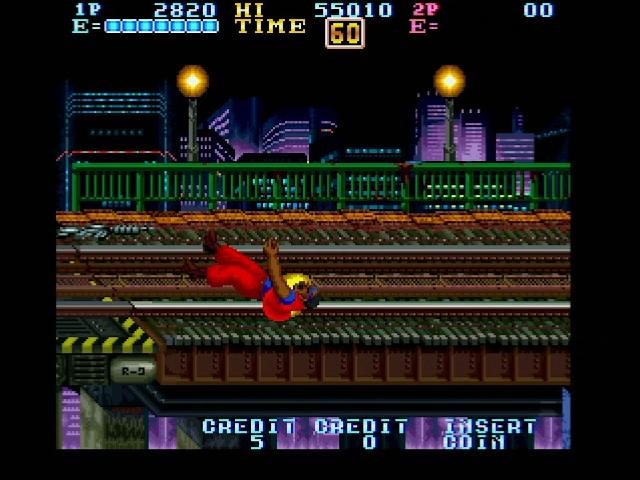 The biggest issue with Gang Wars is just that it really, really wants to be Double Dragon. And it imitates it fairly well; it has the same somewhat stiff controls and movement. At the very least, the Alpha board with its Motorola 68000 seems to be able to run the game without slowdown, though I didn’t play with two players on-screen. However the game itself is slow enough; the later bosses in particular just take a brutal number of hits. They’re not even that hard, at least on normal difficulty; you just sit there mashing the a button, the boss falls, it gets back up, over and over. 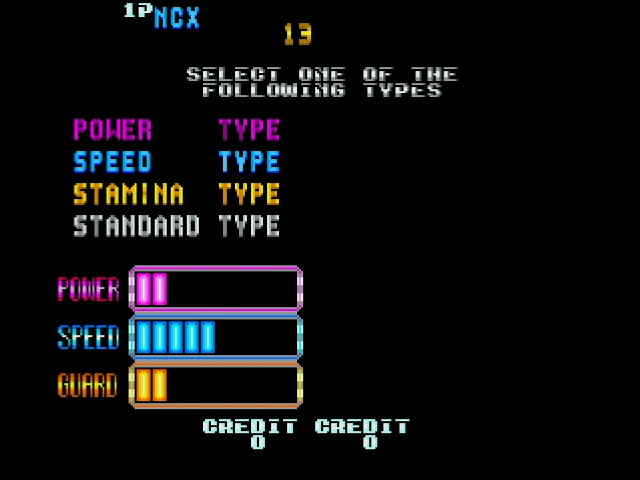 The game’s biggest attempt at unique gameplay is a system of character stats; you choose your fighter’s base stats at the beginning of the game, and then at the end of each stage can distribute additional points in POWER, SPEED, and GUARD. However, honestly, I didn’t notice too much of a difference; I have to assume there is an effect, but it felt a bit arbitrary. 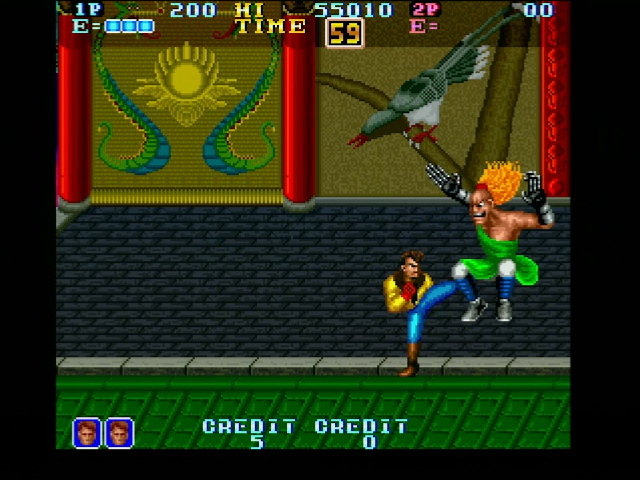 One misuse of the system’s capabilities comes with that ALPHA-VOICE88 sound chip. Clearly, they wanted to pump out some samples with the DAC. And one of the additions they made was that enemies will laugh at you when you get hit by them. They even have little animations of them laughing, so clearly effort was put in here. 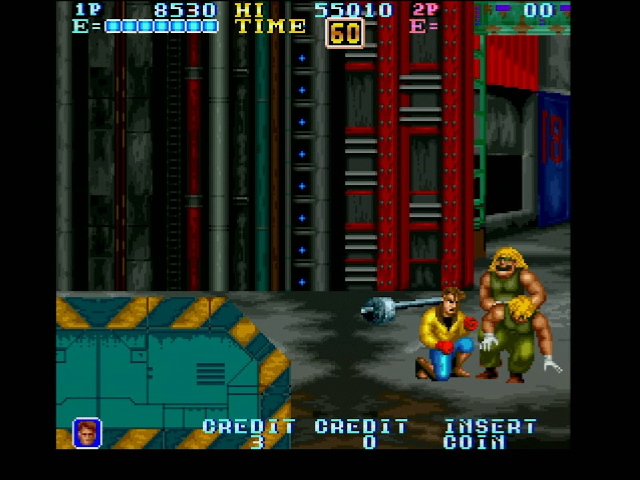 The problem is that all of the laughs use the exact same sample. And so you hear this same exact laugh, with the same excess echo, over and over, every time you’re losing. It’s like the game is trying to convince you to ragequit it.

Honestly none of this is that bad. It’s just that none of it is that good either. Gang Wars is a perfectly good game to play with a friend if there’s a line at the Double Dragon 2. If there’s a Final Fight (another 1989 release) though, definitely play that instead, even if you have to wait.

As a 1990 title for the young Neo Geo hardware, Alpha Denshi released another beat-em-up. This one was Ninja-themed, and went by the fairly logical name Ninja Combat. 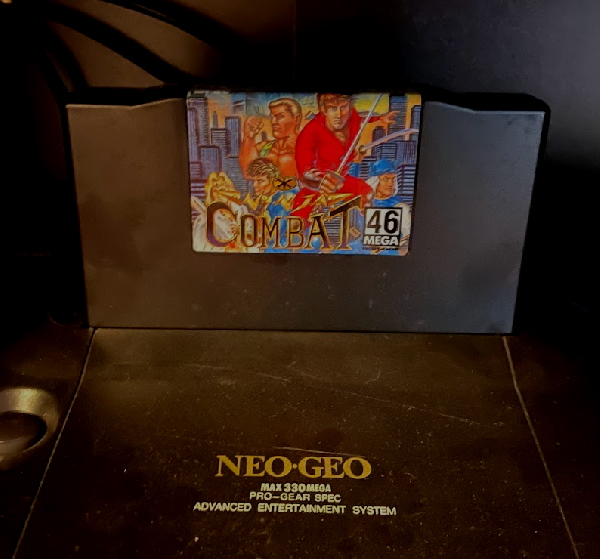 Ninja Combat is the story of Joe and Hayabusa, two ninja on a quest to enter the NINJA TOWER and defeat the SHADOW FAMILY. 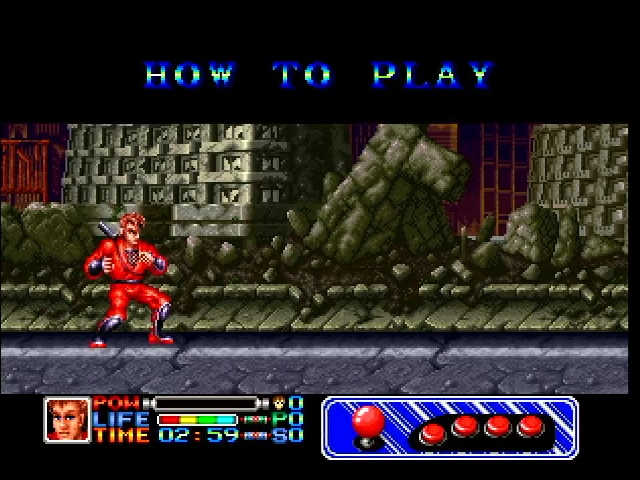 Ninja Combat plays fairly similar to Gang Wars, the same Double Dragon-inspired stiff controls, but it is nicer in almost all aspects. The sprites are bigger and the game is more weapon-focused. You can also play as bosses you’ve defeated, who will have their own unique weapon in combat, but won’t let you switch out. The bosses feel a bit more fair, and in any case, at least you can save to the Neo Geo’s memory card. 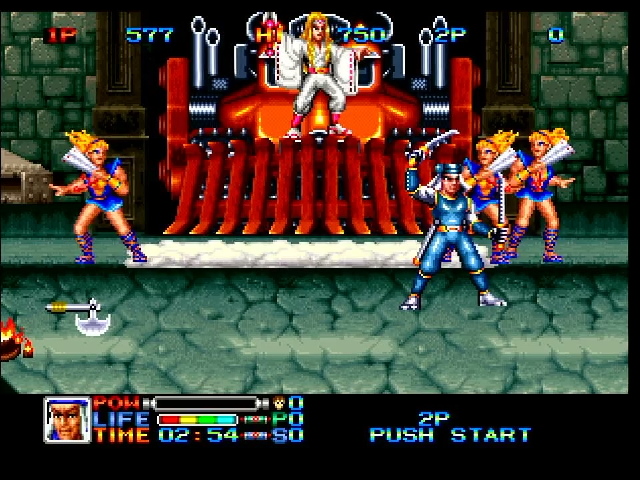 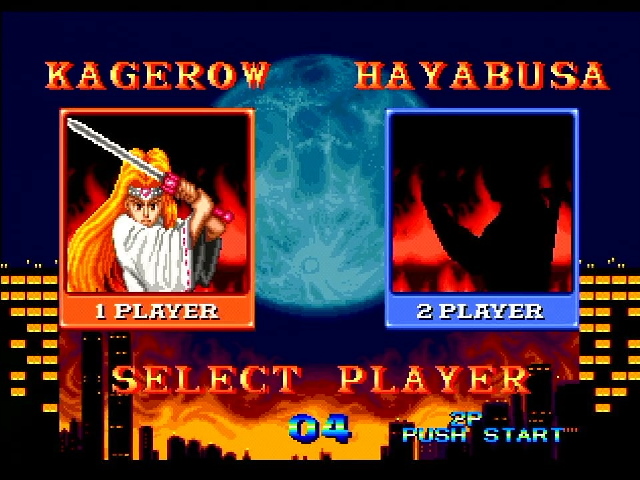 Overall, if someone is making you play an Alpha Denshi beat ‘em up, this is the one to get. Glad to see they improved in a year. The one tradeoff is that the cutscene graphics aren’t as large or detailed as Gang Wars; instead, they are closer to the in-game art style. On the plus side, you get English voice acting; in Gang Wars the voice acting is always in Japanese. 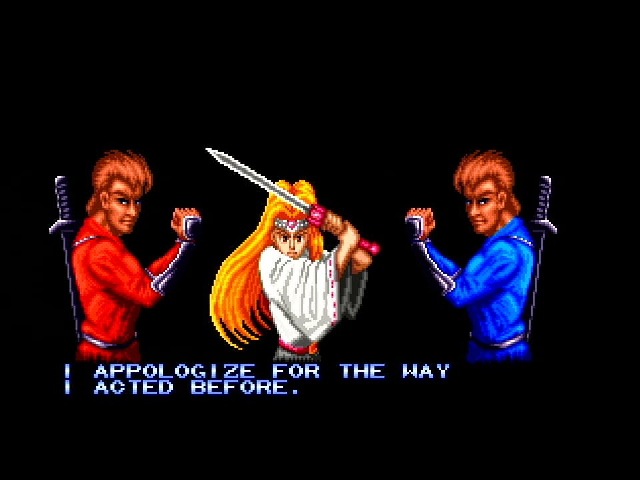 And with that I think I’ve said everything I want to say about the Alpha 68k series of arcade boards. And honestly Gang Wars isn’t a bad game, even if I find the hardware it’s running on more interesting than the game itself. I did play through it all the way, after all– that counts for something. It’s gotten an occasional re-release in recent years, though it didn’t make it into SNK 40th Anniversary Collection. I’d definitely put it in a “play it if you have the chance, but don’t seek it out” category. 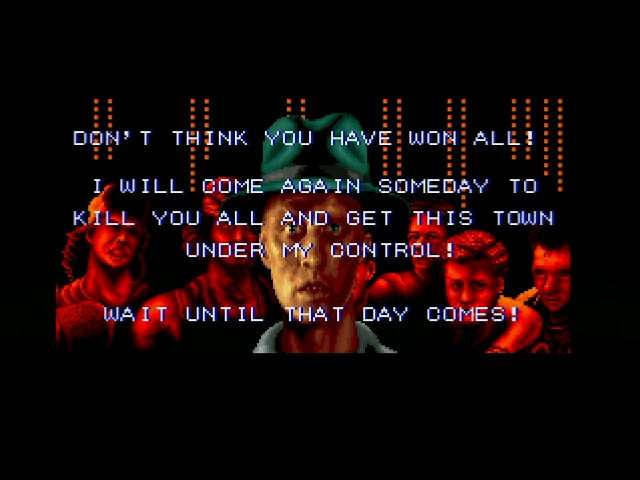