I’m assured that marketing is very important in order to let the people know about goods and services. But sometimes… marketers aren’t entirely truthful. Shocking, I know. Let’s look at one particular claim made by Turbo Technologies about the Turbo Duo. Is it as good as they say? If it is, great! If it’s not, well, we can call them up. Surely they’re still around. The Turbo Duo is a pretty cool console, after all.

It’s October 1992. Sega’s just launched the Sega CD in North America. It’s time for games to move off of older cartridge-based systems and onto shiny discs (unless you’re a Nintendo fangirl like I was in the 90’s). But wait! Sega did not invent the video game CD. Credit for that must go to NEC and Hudson’s little baby, which had already flopped in its TurboGrafx-CD form in the United States. Instead, a new company, Turbo Technologies, was formed to market its rebirth, the Turbo Duo. And this is how they would stand up to Sega.

It was the first paragraph of this that stood out to me. Let’s take a closer look. 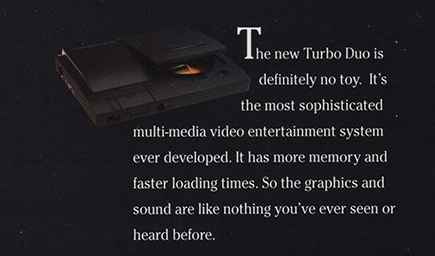 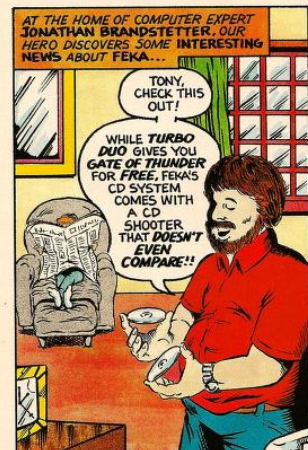 Ah, sorry about that. It happens.

However, when I pointed this out on Twitter, David Shadoff pointed out that they probably just meant more memory compared to the earlier TurboGrafx-CD, which only had 64kiB of program RAM vs. the Turbo Duo’s 256kiB. So that’s actually quite reasonable to compare.

But that raises a question! See, I assumed that, in comparison to the Sega CD, the Turbo Duo probably does have faster loading times. After all, it’s loading less data, and honestly, PC Engine CD games I’ve played generally do not have much noticeable loading, at least as long as they’re not using the arcade card, which never made it to the United States. Using one of those over here is a pain anyway. 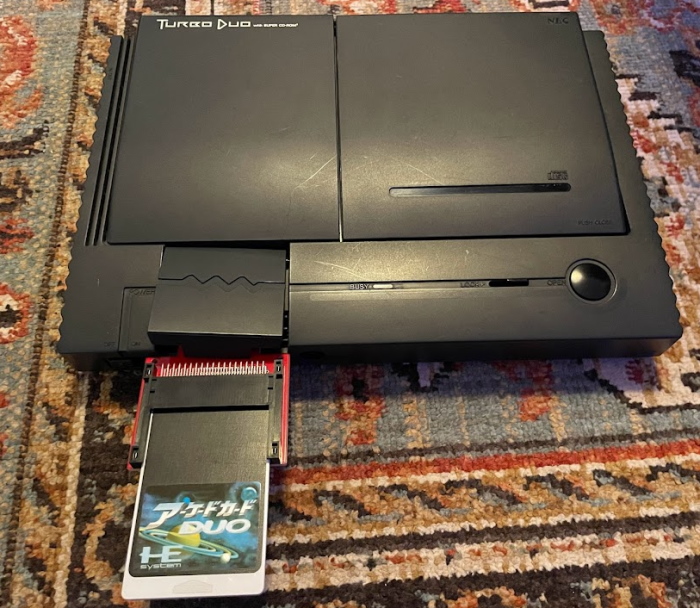 Now, as far as I know, both are a “1X” CD-ROM drive, but that doesn’t actually mean one can’t be faster than the other. For example, the Neo Geo CDZ is reported to use a 1X drive, but it’s quite noticeably faster than the original Neo Geo CD. With the Satiator review we saw that modest gains can happen even if you don’t stream bits any faster thanks to things like seek times. And the Turbo Duo is a complete redesign of the PC Engine CD hardware. There’s a lot of potential for small improvements.

The TurboGrafx-CD was a flop in the United States. Being a flop with an excellent pedigree and some great games, that now means that it’s quite rare. Being rare, that means it’s expensive, and since I already have about a thousand ways to play PC Engine CD games, I don’t really want to buy one. So, is this over before it begins? 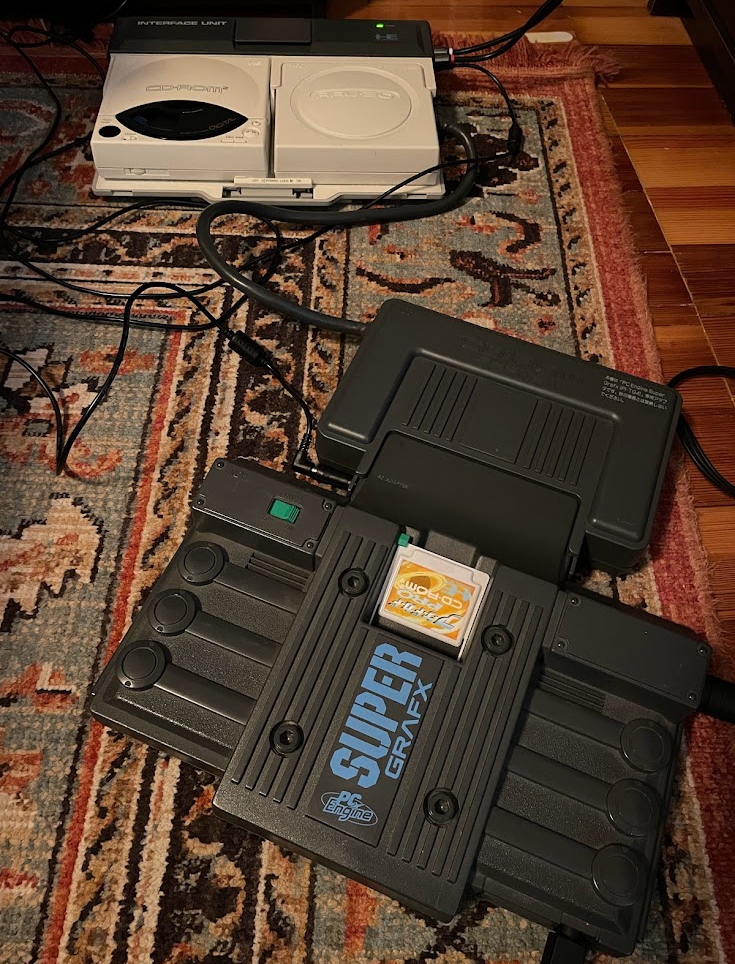 Nope! Enter the SuperGrafx-CD. This is the combination of the SuperGrafx and the Interface Unit, Japan-exclusive hardware that is nevertheless capable of running the same interface as the PC Engine CD. The PC Engine CD’s CD-ROM drive, the CD-ROM2, is as far as I know the same as the TurboGrafx-CD, just in white plastic instead of black. So we can use the SuperGrafx-CD as a stand-in for the TurboGrafx-CD. After all, nothing Hudson and NEC ever did with the CD took advantage of SuperGrafx features. (But I did! Okay enough self-promotion)

Let’s defeat the entire purpose right here. There’s a larger problem, and that problem is: it’s 2022. The PC Engine CD dates back to 1989, the American Turbo Duo to 1992 (in test markets, 1993 nationwide). And the Turbo Duo is a system that came out in the midst of the capacitor plague. My consoles are used consoles; the Turbo Duo has been recapped and repaired multiple times. (The CD-ROM2 is a little champ and hasn’t needed it, but it is a bit noisy)

So these aren’t going to be doing their best. To give them a fair shot, I’m going to be using only pressed CDs, no CD-Rs (which means Space Ava 201 can’t be a test game, as I haven’t had that pressed… yet?).

Since I have more systems, we might as well include them. 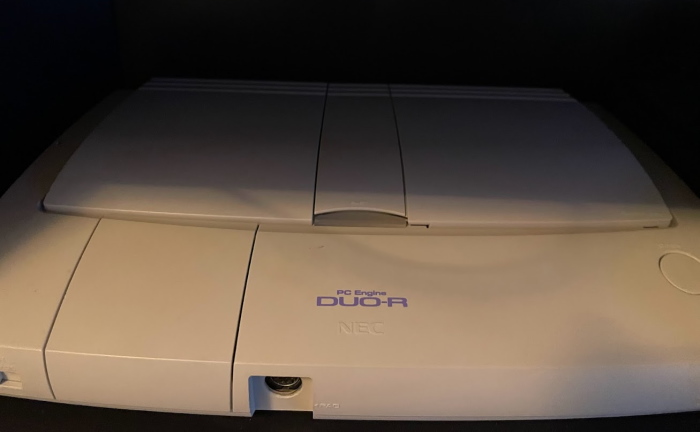 Here’s the PC Engine Duo R. It’s even newer than the Turbo Duo, with only modest cost-cutting. The big benefit of this system is that it has an RGB mod, so it has cleaner picture output. The rest of the systems here only output composite. (There’s a lot to be said about PC Engine video output, but I won’t say it here)

This PC Engine Duo R has also been recapped and serviced several years ago when the RGB mod was performed.

And of course, the system everyone loves to hate, the Pioneer LaserActive. My LaserActive has a weak laser output, but has been calibrated and recapped to the best possible state. This has a completely different drive setup, so it’ll be interesting at least.

One thing to note is that the LaserActive has a very different BIOS than the other systems; while the Japanese and American BIOSes aren’t identical, they’re very close and behavior can be expected to be equivalent. The Pioneer BIOS is different, featuring fancy capabilities like controlling a tray-loading drive from software. Since we’ll use the BIOS as a start of loading time, this could be an issue.

So my hypothesis here is that there will be no significant difference. In fact, I expect the Turbo Duo to be the slowest of the three, only because it’s in the worst physical shape (the motherboard had some very bad capacitor damage, and it’s still not performing at top level).

Basically, my hypothesis is that Turbo Technologies was, shall we say, optimistic. 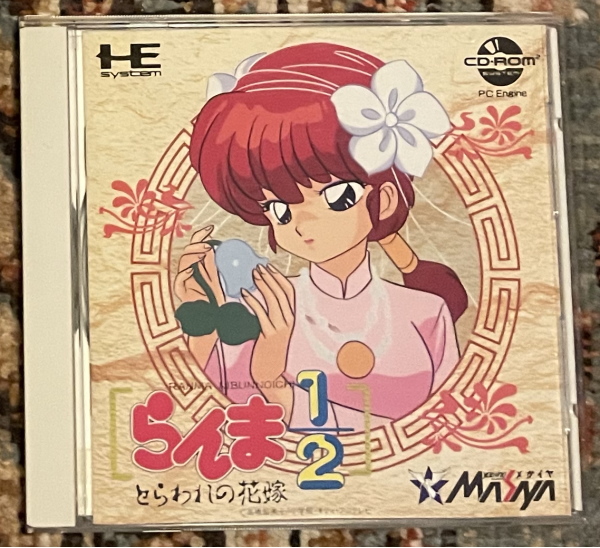 This is a game based on Rumiko Takahashi’s gender-swapping anime Ranma 1/2. This particular one, unlike most Ranma-themed games, is not a fighting game or beat ‘em up, but is a visual novel. I found it pretty fun, even with my rather weak Japanese, and it has an adorable opening. So check it out if you like Ranma. 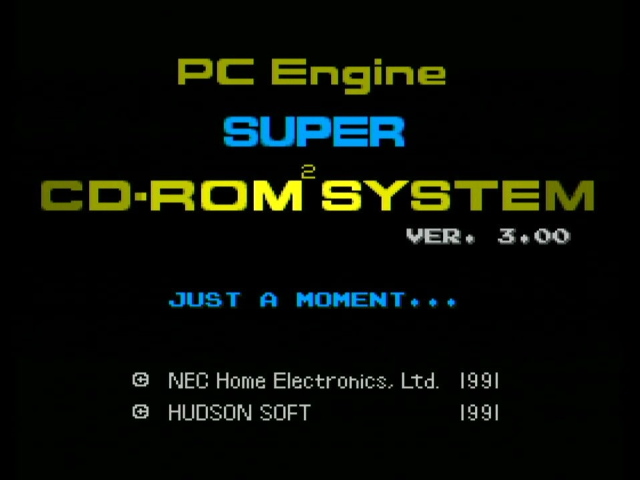 The opening provides a good starting point. The opening theme of the anime plays using CD audio starting with a gong when the developer logo, Masaya, occurs on-screen. Therefore, all of the loading must happen before the Masaya logo appears. 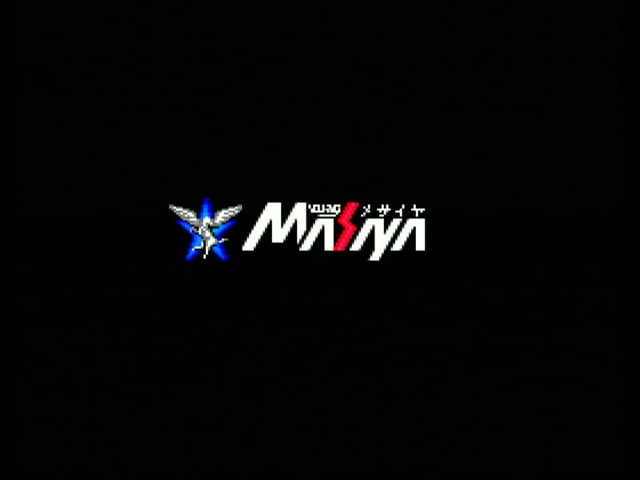 I measured the amount of time from when the first black frame after the BIOS occured, to the last black frame before the Masaya logo appears.

Outcome: The Turbo Duo loses this one hard. The LaserActive does very well, which makes me suspect the BIOS is giving it an unfair advantage. (However, I chose all the trials before seeing results) 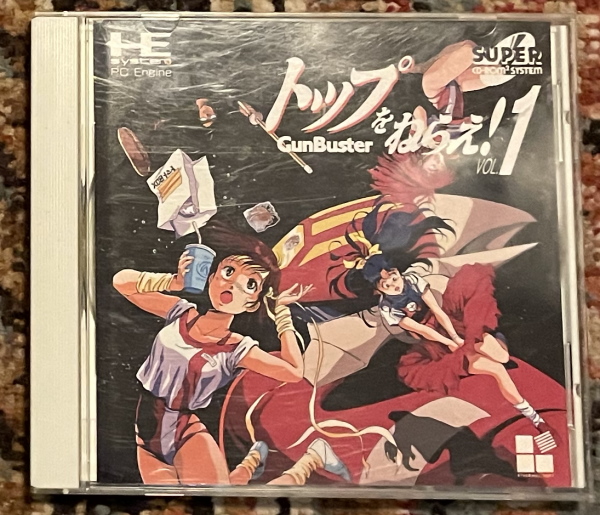 Another game for an anime I like, Gunbuster is the story of Takaya Noriko as she fights off intergalactic baddies and is stuck one of the few science fiction franchise to actually care about time dilation. However, time dilation will not be taken into account here, as all discs should spin at the same speed. This game uses the Super System Card, so it has more data to load. 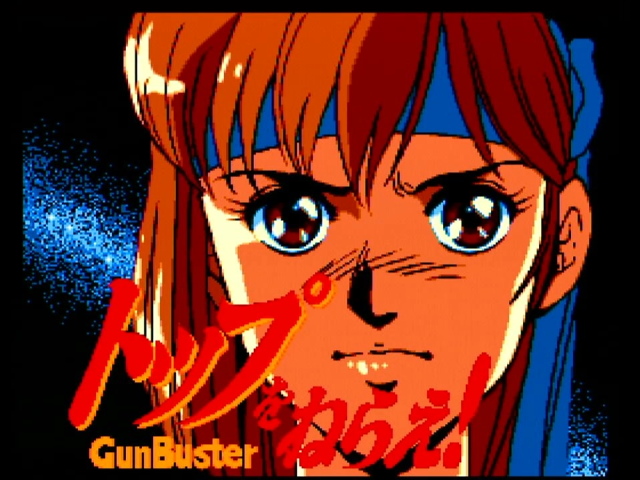 This game also starts with a CD-audio anime opening, but beforehand it has this picture of Noriko looking angry. We’ll start our count after the BIOS, but end right when this fades out.

Outcome: Good news for the Turbo Duo, something is going seriously wrong with the PC Engine Duo R. Actually, the Turbo Duo even beat the SuperGrafx-CD this time. These results definitely make me think that the CD-ROM2 test above is in the “margin of error”, and we need a harder test. 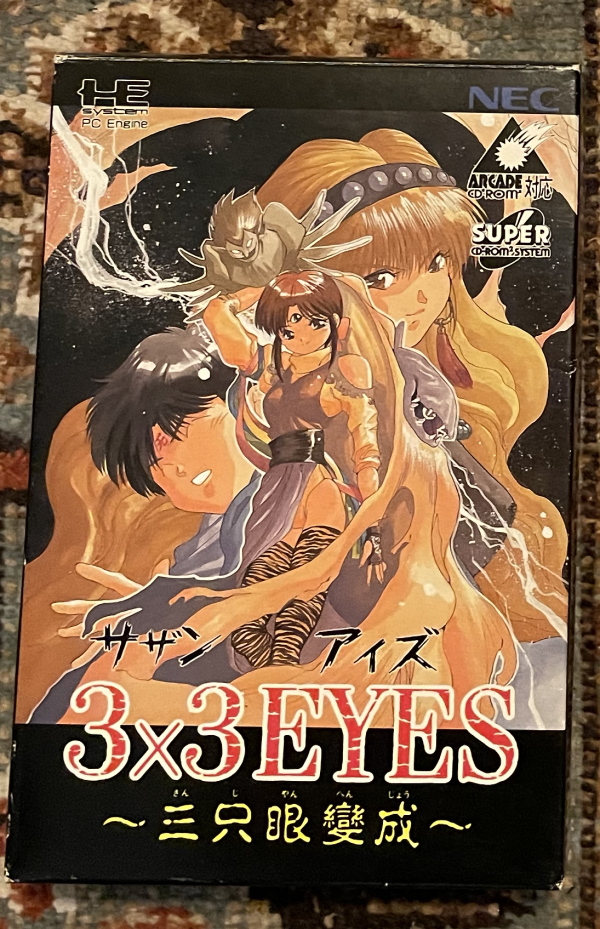 This is a game I covered in the Arcade Card blog post as well, if you remember. 3x3 Eyes is another anime-based game, and another one with a dramatic opening. But this one only uses CD quality audio in the opening if you have the Arcade Card attached, and it has a loading sequence that’s easy to time. (It also came with a VHS tape, which is why the box is bigger than just a jewel case) 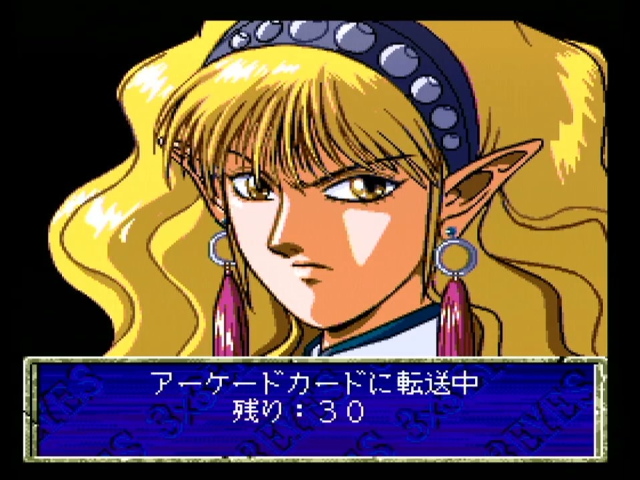 We’ll use the loading screen, the amount of time the counter was on screen. This means that at least this test will be free of BIOS interference.

Outcome: Holy crap what is wrong with my PC Engine Duo-R, did NEC seriously cheap out on the CD-ROM drive with the “R” redesign, or perhaps is there something wrong with my unit? In any case, that’s the only result that really stands out here.

Honestly, from the tests I ran, I don’t see any real difference between the Turbo Duo and the SuperGrafx-CD– and therefore, most likely there isn’t any real loading time difference between the Turbo Duo and the TurboGrafx-CD. Sorry Turbo Technologies; were you really that desperate? Well, given that this is the company that would later give us Johnny Turbo… they may have been a little desperate. 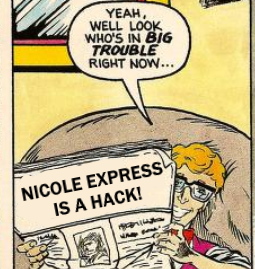 I’m really curious about the PC Engine Duo R, however, as that model is usually considered a quite reliable one in PC Engine circles. If you happen to have a Duo R, 3x3 Eyes, and an Arcade Card Duo, I’d really appreciate it if you could run the same test. I’d like to know if something’s wrong with my system. 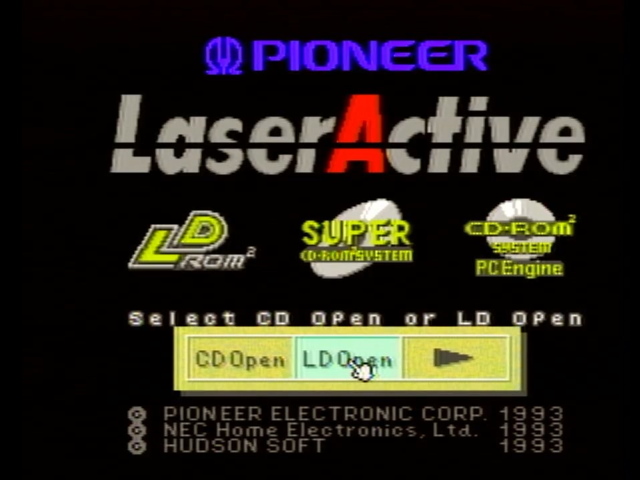 And the LaserActive is consistently fastest! That did surprise me, but it has a completely different drive mechanism, and one that needs to be able to seek quickly to deal with the much larger LaserDiscs. So maybe it shouldn’t be that surprising; glad to see that thing is good for something. But with time savings that small, I doubt anyone noticed.